In honor of my father’s show opening in Calgary tomorrow I am adding another William Perehudoff essay – but don’t worry, I didn’t write it! Helen Zenith, director/owner of the spacious chic NewZones Gallery in Calgary is a former painter who writes about working with my father in New York. 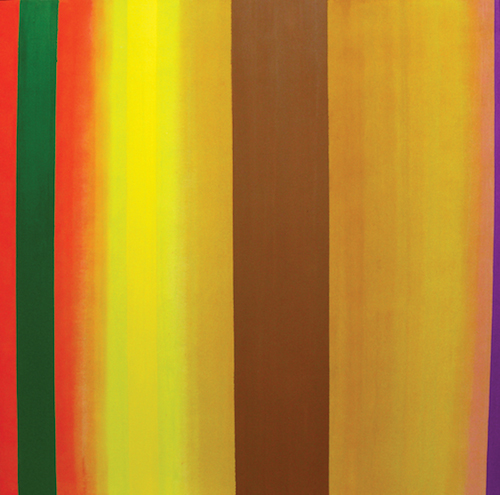 “Summer of 1987 at Triangle in Pine Plains, New York is when I first met William Perehudoff. As if it was yesterday, I remember a group of us in Bill’s studio looking at his paintings. It was an exciting time in my life; I was a young artist mingling with art world ‘heavyweights’ such as British Sculptor Sir Anthony Caro, world renowned art historian-critic Clement Greenberg, New York art dealer André Emmerich with his art-star Helen Frankenthaler, and highly regarded senior Canadian painter, William Perehudoff!
When Bill spoke about his work, his voice was quiet and his tone was serious, yet he was so humble and generous towards the young artists participating in the workshop. I remember Clement Greenberg, ten years Bill’s senior (Bill was 68), put his arm around Bill and called him “my Boychick”, (a Yiddish term of endearment towards one’s son), as he spoke glowingly of Bill’s paintings. On this lovely July ’87 morning, William Perehudoff was celebrated by the greatest ‘players’ in Abstract Art of the 20th century!
Our exhibition, FIFTY is a personal tribute to William Perehudoff. Tamar and I are privileged as well as honoured to know William and be able to share with you some special paintings. I personally selected the body of work which spans 5 decades. Today, William Perehudoff is 92 years old and this exhibition celebrates fifty years of abstraction: five decades of painting.”

Read more about Art and Travel.