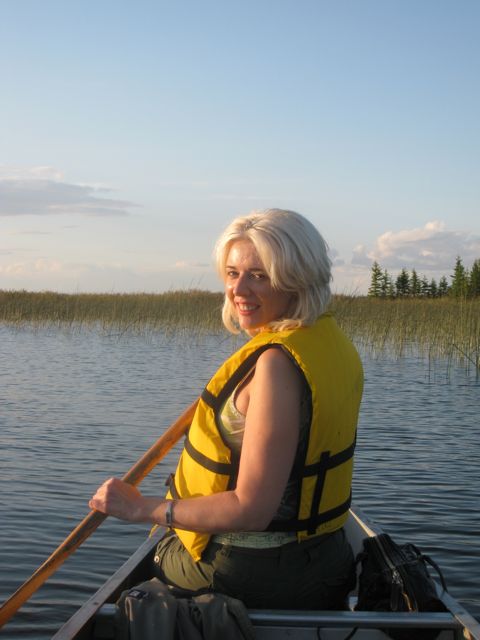 Saskatchewan – a mind-boggling experience even John Cage could appreciate

Strange things happen in bogs, especially in northern Europe where all kinds of rituals and magical rites went on during the Iron Age. After visiting a bog, or muskeg, just near Waskesiu Lake in northern Saskatchewan, in Prince Albert Provincial Park, and walking the Boundary Bog Trail, I’ve become a certified bog fan.

But I have a long history with a different Saskatchewan bog, the same bog John Cage, the composer, was lost in in 1965.

As far as I know, no rites or sacrificial offerings have ever been made in a northern Saskatchewan bog, but there is still some of that unsettling otherworldly atmosphere. It feels as if strange rites and rituals could go on there, and surely do, at night when you’re not there, or the minute you turn your head away, or at least they will occur there in the future, so I’m keeping my eye out.

And while the 2-km loop Boundary Bog Trail near Waskesiu Lake in Saskatchewan is a popular well-marked hike, there are many other less-explored bogs up there in the gorgeous boreal forest of northern Saskatchewan. Along with bears, coyotes, cougars and timber wolves, of course.

People who are not from the Prairie’s often think of grain fields and long expanses of flat lands when they think of Saskatchewan, but they haven’t travelled up north, where it’s forest, lakes and rain – a perfect recipe for a bog.

Emma Lake is really 3 lakes joined together. Our cottage is on Big Emma, which perversely, is the least developed of the joined lakes, and the most set apart, it’s connected to the others by a channel. It would be a mysterious place even without a bog, with tall pines, leeches in the lake, endlessly whispering branches and air so scented with pine that you can hold it in your hands.

There is only one row of cabins on Big Emma – it’s called Okema Beach. And there is an artist’s workshop at the end of the dirt road, with rustic cabins and a dining hall over the lake and a few studios. It’s owned by the University of Saskatchewan, and used to be called the Emma Lake Artist’s Workshop, then it became the Kenderdine Campus, after Gus Kenderdine, an artist who first established the Emma Lake Summer Art School.

Sadly, the Kenderdine Campus has just been closed down by the university – they say for 3 years – but we think the Emma Lake Workshop is doomed.
Shame on you, University of Saskatchewan! You’re closing the doors on our heritage and our history. Not to mention, putting some dedicated people out of jobs.

Emma Lake Workshop in the 60s

The Emma Lake Workshop, which ran for two weeks in August every year, was so popular in the 60s that all the big artists from New York, like Ken Noland, Frank Stella and Jules Olitski came there to work, as so did the critic Clement Greenberg – which added an extra surreal layer onto a northern Saskatchewan lake with just one row of cottages and not even a store. One year, 1965, the famous composer John Cage came there, too.

The Enchanted Forest of Emma Lake

Art was not foremost on my two sisters’ and my minds. At Emma Lake, in our incessant quest for adventure, we used to make regular forays into a dark mossy area a couple of kilometres down the road that we called the Enchanted Forest. There are no neat trails or paths in the Enchanted Forest, not like at the Boundary Bog Trail in Waskesiu.

The Enchanted Forest is as wild as it can get. You just enter this crazy forest that doesn’t look like much from the outside, but inside everything is coated in sphagnum moss and you sink up to your ankles in the stuff and know that you’re in another world, an enchanted one, where even the sound seems to get sucked up by the moss.

And because there are no signs or markers and it’s not on any maps, there’s no danger of crowds or tourists. I can truly say that I have never ever seen a tourist in the Enchanted Forest.

Time doesn’t move there. Trees fall and then lie there for probably centuries, slowly getting swallowed by moss. And whenever someone says, if a tree falls in the forest does it make a sound, I picture a tree in the Enchanted Forest.

While the bog is beautiful, it can be dangerously confusing. Somehow my sisters and I never got lost but one night John Cage, did.

John Cage, who is obviously a composer rather than a painter or sculptor, was nonetheless visiting the Emma Lake Artists Workshop as a guest lecturer – there must have been some musicians there that year, and he went twice to the Enchanted Forest to pick mushrooms and the second time he got lost.

John Cage lost in the muskeg

John Cage had vanished. Swallowed up by a Canadian bog. But because he happened to be a mushroom expert, he didn’t go hungry but gathered wild mushrooms while he waited to be rescued.

According to John Cage’s journal he startled a moose by yelling for help, soaked his sneakers in the muskeg and holed up in a squirrel’s midden for the night.

(Helpful fact: A squirrel’s midden is a squirrel’s dining room, so to speak, only the squirrel doesn’t clean up after himself and dumps all the shells, etc, from the meal there, so it is probably quite cushy, as forest beds go.)

When John Cage did finally get rescued from the muskeg and was back at the art camp he cooked up the mushrooms he’d gathered and served them to all the other artists, my mother, Dorothy Knowles, included.

I wonder what John Cage thought about in the muskeg, alone in the dark. Was he thinking of strange rituals and rites that could go on there, late at night, or if you turned away? That’s what I’d be thinking about. Not to mention bears.

But John Cage seems like he might have been the unflappable type. Maybe while he was lost in the bog he was thinking about art and nature. It would seem that way because while he was serving the mushrooms he’d gathered to the artists in the dining hall he stopped in front of my mother, who is a landscape painter.

“Is it you who paints those beautiful paintings in the studio?” he asked her.

“Yes,” she said and ate her mushrooms, feeling very pleased. You might, in fact, even say it was music to her ears.

Getting a travel column
Next Post:Spa Vacation at The Balmoral, Edinburgh