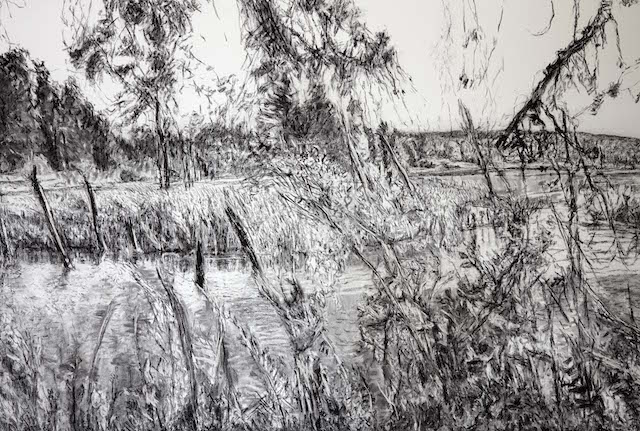 Is Edmonton, Alberta, an art destination. You’d be surprised. From the historic Fathers of Confederation mural in the Hotel Macdonald to the top galleries, here’s how to find the best art in this Canadian prarie city.

That’s right, folks. It’s an Edmonton art gallery trip, a wild and crazy cultural vacation to that big prairie city in the province of Alberta in good old Canada – though now I pause to think about it, Canada’s not that old. It was founded in 1867, which would make it, um (pause for calculation), 147 years old.  That means Canada was only 46 when the Hotel Macdonald opened in Edmonton in 1915.

Let’s do more math about Edmonton!

This is why it was named the Hotel Macdonald, after Canada’s first Prime Minister and one of the Fathers of Confederation. What? You’re getting bored? Okay, let’s move on to our Edmonton art gallery trip!

Where to begin your Edmonton art gallery trip

We begin where any good art trip should start. At the bar. In this case the Confederation Lounge in the Fairmont Hotel Macdonald. It’s not always (as in never) easy for a solo female traveller to walk into a lounge and sit at the bar, but I did it anyway because 1) I was hoping someone would take pity on me and talk to me and 2) I wanted a lobster salad.

The Confederation Lounge in the Fairmont Hotel Macdonald

The Confederation Lounge is a lovely place to sit. It’s clearly a hub for well-heeled Edmontonians, a blast from the past with lots of wood panelling and velvet upholstery – extremely comfy in a hello-welcome-to-my-grand-chateau-library sort of way.

The things you learn in a bar

When no one took pity and acknowledged my existence, I solved that pesky situation by intruding on the conversation beside me. This is how I learned that the Washington Capitals had been staying at the hotel. When I texted my husband this exciting bit of information, he texted back, Get Alexander Ovechkin’s autograph.

Once I had established who Alexander Ovechkin is (famous hockey player and captain of the Washington Capitals, and yes, I do realize everyone in the hockey-playing world knows this except for me), I also determined that he had checked out earlier that day. Then the man sitting beside me went off to the hockey game so I didn’t learn any more about hockey.

The Fathers of Confederation mural in Edmonton

In fact, there has been a spirited debate over the years about whether this particular Fathers of Confederation in the Fairmont Hotel Macdonald should be termed a reproduction or if it’s an original in its own right – because that’s what art people do in their spare time, they get worked up over issues such as this. (PS: It’s not a debate that has ever kept me up at night.)

Art gossip about the Fathers of Confederation

As an interesting side note, Fathers of Confederation paintings seem to attract trouble. Not only did the original burn up, another famous reproduction – if, in fact, it can be deemed a reproduction – in Charlottetown, Prince Edward Island, was vandalized in 2000, and in 1965, the Fathers of Confederation here in the hotel was nearly destroyed after heavy rains caused damage to the plaster walls behind it.

But we can relax. No lasting harm was done, and the Fathers of Confederation, including Sir John A Macdonald, watched over me sternly as I finished my glass of prosecco and went up to my room.

The Art Gallery of Alberta

Once you have thoroughly examined the Fathers of Confederation and come to your own conclusions about its reproductiveness or originality, you may want to check out one of the most inventive buildings in Edmonton, the Art Gallery of Alberta, a 4-year old landmark with that whole exuberant metal Guggenheim Bilbao thing going on.

Made of patinaed (no, that’s not a typo) zinc, glazing, and stainless steel, the Art Gallery of Alberta is, according to the architect’s project description: “a building of dramatic forms and geometric complexity.  With both orthogonal volumes and the curvilinear “borealis”, the careful selection of exterior surface materials brings unity to the overall architectural composition.”

Allow me to translate this into English

The Art Gallery of Alberta is very curvy, reflective and shiny.

I know you’re excited, but before you race off to the Art Gallery of Alberta, conveniently located downtown on Sir Winston Churchill Square, you should know that Canada’s luxury department store, Holt Renfrew, is also conveniently located just a few blocks away. You should also know that there is no provincial sales tax in Alberta! So you could be excused for taking a break from your Edmonton art gallery trip, even though you haven’t actually seen any art other than the Fathers of Confederation, and that was possibly under the influence of alcohol because it hangs in a bar.

If you do make a quick trip to Holt Renfrew, please check to see if the Andrew Marc Lara leather and lambskin winter coat I want is still there. I put it on hold, and then couldn’t decide if it was true coat love or not, and finally, overcome with indecision, I let it run free. And now I’m thinking that if I had the coat probably it would change my life. Probably I’d be more creative. Probably it’s an artwork in its own right and therefore an investment … oh, forget it. Back to our Edmonton art gallery trip!

Art at the West Edmonton Mall

Yes, there is art there, so if you want to take a side trip to the West Edmonton Mall, which, of course, used to be the very biggest mall in all the land (until 2004), feel free. Between trips to Victoria’s Secret and the roller coaster, check out the two installations by Montreal sculptor Pascale Girardin: 1) The white ceramic floating flowers, symbolic of the Alberta Wild Rose, hanging in the Rose Court and 2) The 140 handmade glass ‘oil’ droplets surrounding the pre-existing Oilmen Statue.

The West Ed Mall wasn’t on my agenda, however, because I decided improving my mind at the Art Gallery of Alberta was more important – probably even more important than a new Lara coat from Holt Renfrew – though I may change my mind in January when I have nothing but memories of Toulouse-Lautrec to sustain me.

Yes! There happened to be a Toulouse-Lautrec show on at the Art Gallery of Alberta. Oh, happy day. By this time my mother and sister Rebecca had arrived in Edmonton because my mother, artist Dorothy Knowles, was having an art opening at the Douglas Udell Gallery on 124th Street, so we all went to the Edmonton Art Gallery together (just as soon as I had dragged them to Holt Renfrew to take another look at that coat.)

A bad boy of the art world

If you don’t know Henri Toulouse-Lautrec, but I’ll bet you do, let me recap. Toulouse-Lautrec was a French Post-Impressionist painter, one of those decadent bohemian artists who lived in Paris in the late 1800s, drank absinthe and got up to all kinds of no good.

The Art Gallery of Alberta – a cultural institution

The Art Gallery of Alberta also had an exhibition to mark its 90th birthday – which makes it only nine years younger than the Fairmont Hotel Macdonald and, therefore (pause for calculation) only 57 years younger than Canada. It’s the oldest cultural institution in Alberta and to celebrate there was an exhibition of some top Alberta artists including, coincidently, an ex-boyfriend of mine who will remain nameless in case he prefers anonymity. (Hi Sean!)

An art trip with a past

Before we continue, let me explain that my family has a long history with art in Edmonton. The paintings of my mother, Dorothy Knowles, and late father, William Perehudoff, have been exhibited at the Douglas Udell Gallery since I was a wee young thing, and I did a Masters of Visual Art here at the University of Alberta. (And if you have never heard of a Masters of Visual Art, you would not be the first. Or the last. But nonetheless, I have one.)

The area of Edmonton along the north bank of the river valley at the west end of Jasper Avenue is sort of a happening place where a number of local art galleries are located (13 to be exact). According to the 124 Street neighbourhood’s website, they “are the refined district for food, fashion and art in the heart of Edmonton.”

No doubt I brought the tone of the place down, not being nearly as refined as I would like people to think I was, but nevertheless, 124 Street in Edmonton is a neighbourhood, if you’re interested in art, you might want to check out.

Oddly enough I kept running into art and/or artists I know. At the Peter Robertson Gallery at 12304 Jasper Avenue NW, I ran into a popular landscape artist from BC, David Alexander, who was also having an art opening that day. (Although admittedly, he’s not from Edmonton, but he did used to live in Saskatoon.)

Then Clay Ellis, a local sculptor, who constructs to-die for sexy sculptures out of polished steel and colour and gloss (in a complicated manner that he explained to me but has now gone with the wind out of my head) strolled in.

And at Scott Gallery at 10411 – 124 Street, there was a show by Harold Feist – yes, father of the famous Leslie Feist – whose abstracts I have known and admired for years. (I wish I had a picture, but I don’t – I’m so tempted to steal one off the gallery website, but I’m a better person than that.)

When you need a little art break

After that, I was tired so I went to my mom’s art opening and lay down. (Don’t worry, I didn’t embarrass her. Very much.) And then I had a glass of wine and lots of people came and it was a fine opening indeed.

You might even go so far as to say, by examining the photo below, that Douglas Udell, who owns the gallery, was ecstatic. (Either that or he was imagining some dastardly deed and laughing maniacally – but I don’t think so.)

Art in Edmonton, a family affair

By this time my other sister, Catherine, had also arrived in Edmonton so it turned into a family reunion, especially when, in a back room where a huge painting by my late father was hanging, we opted for a family photo and I swear he was the biggest presence of all.

Our whirlwind visit to Edmonton ended exactly where any good art trip should. At the bar. In this case the Confederation Lounge in the Fairmont Hotel Macdonald, with the watchful eyes of the Fathers of Confederation looking over us.

Read more about Travel to Canada: about Things to do in Canada

Dog days at The Fairmont Hotel Macdonald
Next Post:Top European Destinations you should see