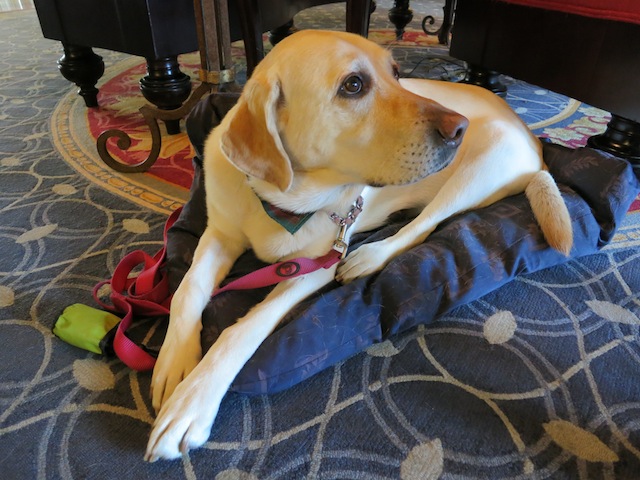 “Whoaa there, Smudge!” I say, as the big yellow lab suddenly takes off down Edmonton’s riverbank path with me in tow. Thankfully she didn’t go far because Smudge, a celebrity employee at The Fairmont Hotel Macdonald, is strong. Stronger than she looks. In fact, when she was lolling around at the foot of a red velvet divan in the lobby of the hotel, her head on her paws, looking up at me with big doleful eyes, I thought she was a pussycat.

Lesson learned: Smudge is a dog, not a pussycat.

Smudge, officially the K9 Ambassador for The Fairmont Hotel Macdonald, is owned by (or owns, depending on your point of view) The Fairmont Hotel Macdonald’s General Manager, Garrett Turta. He obviously can’t bear to part with her for even a day so he brings her to work, where she’s kept busy dealing with the paparazzi (that would be me), fans wanting to pat her soft yellow head, games of tug o’ war with the doorman, chewing her bright pink rubber bone and, of course, private lunch breaks away from the madding crowd.

Happily, Smudge is also available for walks if, that is, it fits into her schedule.

A Fairmont dog who knows her own mind

“She’s a diva,” one employee warned me when we left. And now that Smudge is leading me off the paved riverbank trail up a hill through the grassy brush, stopping to sniff at every rock and tree, I have to agree. Smudge is a dog with an agenda.

A highlight of this Canadian prairie city, Edmonton’s river valley has more than 160 kilometres of riverbank trails that follow along the North Saskatchewan River, creating a swath of green through the heart of the city. It’s a well-used, well-maintained spot of nature with cyclists, strollers and dog walkers – even a Segway tour passed me by.

Once I get Smudge back to the paved path, the grey limestone walls of the hotel rising high above us, Smudge and I pass a group of teenagers hanging out by the river. Normally I’d scuttle past as quickly as possible. Normally they’d have bored surly faces. Not when you’re with Smudge.

“Beautiful dog!” one says. Another comes up and wants to rub Smudge’s pretty head. Stifling a yawn, Smudge turns away.  Smudge is not accepting pats at the moment.  I can’t help it. I start to laugh. Maybe she only likes hotel guests. And now that we’ve impressed the teenagers, Smudge and I sail imperiously on.

He who laughs first …

It’s not until we turn back that I realize the teenagers may have the last laugh on me. The wooden steps leading up from the riverbank to the hotel seem to have multiplied in number. Strange. It felt so easy going down. I wouldn’t mind the climb if it weren’t for the teenagers who are now going to witness me wheezing as I try to keep up with Smudge.

I head up the stairs at a sprightly pace, trying to look bouncy and full of energy. But the sun is really quite hot, springing into summer when I’d dressed for fall. My feet are roasting in my boots. Why hadn’t I packed sandals? Why had I worn such a warm coat? Why had I worn a coat at all? It’s weighing me down! I need to rest! But I can’t because I can feel the teenagers’ eyes boring into me.

This is where Smudge’s training kicks in. She immediately slows to a stately pace. And whenever I fall the slightest bit behind she waits patiently. Is this the same dog that was bounding around happily sniffing everything in sight a few minutes earlier?

A Fairmont Hotel Macdonald ambassador who knows her job

Like many people Smudge has a playful side and a professional side. And (unlike a few people I could name, possibly including myself) she knows when  professionalism counts. Happily, Smudge senses that not humiliating yourself in front of a group of teenagers because you can’t keep up with your dog  is one of those crucial times.

Smudge, a dog with a past

Smudge senses a lot of things, not just because she’s a savvy canine ambassador but because she was originally trained to be a guide dog by the Canadian Guide Dogs for the Blind. Over the course of her training, the now 6-year old lab was deemed too easily ‘distracted’ to make it in the guide dog business, and that’s when she switched to the hanging-around-the-lobby-making-everyone-love-you industry.

I suspect, however, that Smudge wasn’t ever easily distracted at all, but was simply following her own path (much like our walk). She wanted to reach a bigger audience and knew she was destined to be a star.

She probably also had a fondness for luxury and 5-star hotels (Smudge and I have much in common), and she decided that holding court on a doggy bed in lobby of The Fairmont Hotel Macdonald was the right place for her.

About The Fairmont Hotel Macdonald

Built by the Grand Trunk Pacific Railway, the centrally-located Hotel Macdonald opened in 1915. Considered especially modern for its time (elevators! running water in every room!), it quickly became an Edmonton landmark, a glamourous French chateau-esque building with an Indiana limestone facade and copper peaked roof.

The Fairmont Hotel Macdonald – pretty inside and out

Today the hotel has a number of designated heritage areas: the exterior, the Confederation Lounge, the lobby, the Wedgwood Room,  the Empire Ballroom – and oddly enough, the stairway.

The Fairmont Edmonton is a celebrity favourite

Other than a long stint in the 80s when it was shuttered, The Fairmont Hotel Macdonald has seen numerous celebrities come and go, from royalty to pop stars, but perhaps none more memorable than Smudge – at least I was so taken with her I told my sister about her, who told her daughter, who had gone to school in St Andrews in Scotland and insisted she’d met a yellow lab in St Andrews that sounded exactly like Smudge.

Sure enough, when I looked into Smudge’s career history, it included a stint as the Canine Ambassador at The Fairmont St Andrews.

“Smudge,” I said, bending down and ruffling her soft blond ears (once I was sufficiently rested). “I knew you were a local star. I just didn’t realize you were international celebrity as well.”

The Fairmont Hotel Macdonald is unquestionably Edmonton’s top luxury hotel. It’s located downtown with lovely views of the North Saskatchewan River and the scenic river valley. To reserve a room call: 1 800 257 7544 or visit their website. (My room was about $250 per night, but it’s always worth checking their packages and promotions online.)

While ‘The Mac’ is the grandest hotel in Edmonton, it’s one of the smallest Fairmont properties, and with an ambassador like Smudge, an approachable staff and a lively lobby bar patronized by locals and guests, it’s friendly rather than intimidating – so even if you’re not staying here, I’d suggest stopping in for a drink.

Traveling to Canada? Read Things to do in Canada