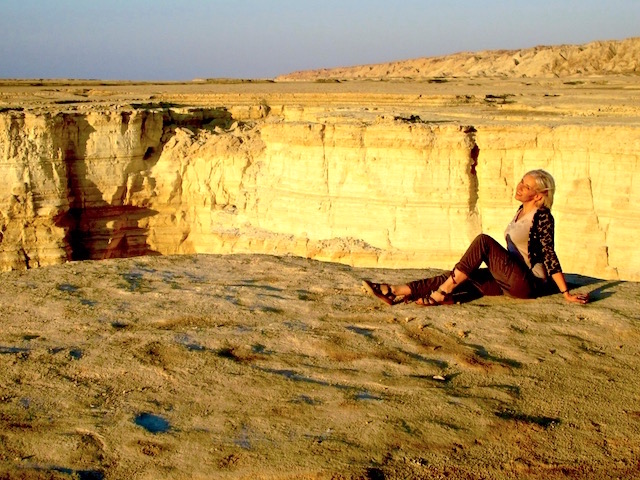 Losing it on a Judean Desert Adventure in Israel

Visiting Israel? Try a Judean Desert jeep tour. This otherworldly desert above the Dead Sea is where the Dead Sea Scrolls were discovered, where biblical history was made and where adventure beckons. And where things get lost for centuries … 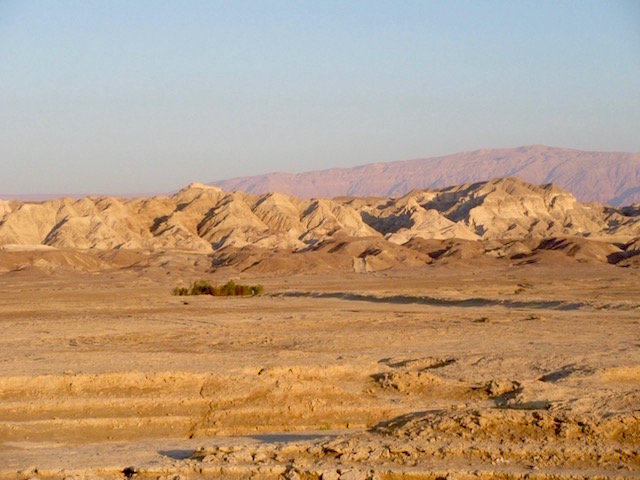 I’m scrambling around in a panic, flinging things out of my suitcase. “Where is it? Where is it?”

Gone. That’s where my notebook is. A week’s worth of notes, quotes and impressions of my whirlwind tour through Israel.

Except now they are. Lost.

I sink down onto the bed in my Jerusalem hotel and try to recall when I last had it.

We were driving on Highway 90 east of Jerusalem, the pale blue Dead Sea on one side, the dry Judean Hills on the other.

As we passed the cliffside caves at Qumran, where the Dead Sea Scrolls were discovered in 1947, I snapped a photo from a distance, patches of black specks in the limestone. I think I scribbled some notes.

How the Dead Sea Scrolls were found

The Dead Sea Scrolls, including the oldest version of the Old Testament ever found, were discovered by a Beduin goat-herd searching for a lost goat from his flock.

He saw a cave and, wary of wild animals, tossed a stone in before entering. The sound of breaking pottery rang out. It was a jar that housed one of the scrolls, scrolls that hadn’t been seen for 2,000 years.

The scrolls were mostly made from parchment (dried animal skins), some from papyrus. Even a copper one would later be found.

The story I was told is that the goat-herd found seven scrolls, so weathered and hardened at first he thought they might be made into a pair of shoes.

In the end, they were taken to an antiquities dealer who saw at once the scrolls were something remarkable, and the Dead Sea Scrolls’ reintroduction into the world began.

I still had my notebook when our small group got out of the van and crammed into a white four wheel drive for our Judean Desert jeep tour.

The Judean Desert isn’t large. It’s a 1500-square-km desert that stretches from the Mountains of Judea to the west to the Dead Sea in the east. Sometimes it’s grouped in with the larger Negev Desert, a popular spot for glamping in Israel.

Confession: I wasn’t thrilled about going on a Judean Desert jeep tour. From the highway the Judean Hills looked like a bleak stretch of nothingness, and I thought it would be a lot more fun to float in the Dead Sea.

But then we were bouncing our way up the hills, roaring along a road that in some places seemed only to be separated from the desert itself by the rows of stones flanking it.

Immediately I was glad I’d come. The pinks, taupes and sun-patted golds of the rock in the afternoon light had me blinking in confusion as my brain reset my idea of how beautiful bleakness can be.

We stopped at the edge of a cliff overlooking the Dead Sea, a stark vision of waves of rock and the windless sea, the hills of Jordan in the background. “You’re standing on the highest mountain in the lowest place on earth,” said our guide, Barak.

“Where are we exactly?” I asked.

He looked at me as if it were obvious. “Mount Sodom.”

Ah. Right. I nodded. No one knows exactly where the sin-filled cities of Sodom and Gomorrah sat, but they were around here somewhere – if, of course, they existed at all.

Earlier, Barak had pointed out a column called “Lot’s Wife,” the woman who hadn’t listened when the angels told her to flee and not to turn around as Sodom was destroyed. When she looked back anyway, she was transformed into a pillar of salt.

2nd Judean Desert Confession: I’ve never understood what was so bad about turning around.

(There are many theories – the most plausible being because Lot’s Wife looked back, she betrayed her longing for that way of life. And FYI: her name was Edith.)

Despite my personal opinion of the harshness of Lot’s wife’s lot in life, it seemed extraordinary that I was standing in a place straight out of biblical history (the Book of Genesis to be exact).

It was even stranger to think that the 11 km long Mount Sodom is at least 80% salt – I had a vision of the entire mountain dissolving into a salty soup as we stood here.

Desert with a view

Driving deeper into the desert we came to a chasm.

“Holy wow!” I said, as we scrambled out with our cameras and notepads and looked at a huge rent in the ground that looked as if some mighty god had hacked into it with an axe

“It’s like the Grand Canyon,” said Steve, one of the men in our group.

An apocalyptic Grand Canyon, I thought. No tourists. No signs or hotels, just land so hard and ancient it looks as if it has stood under the hot sun forever, until finally cracking open like dry split wood.

Party in the Judean Wildnerness

In the middle of this nothingness was a parked van. Two men and a woman had spread out a blanket and were having a picnic. It surprised me as much as if we’d run into them on Mars.

“Have some coffee!” they said, welcoming us, as if we were old friends and not cultures and continents apart. “Sit down!”

Who could turn an invitation like that down? Not me. I sat on the blanket for a minute, then waved goodbye and the next day I was in Jerusalem, as if our Judean Desert jeep tour had all been a dream. And now without my notebook, in a way it was.

At the Israel Museum in Jerusalem we toured the Shrine of the Book, a space-age building that looks like a creamy white mint. Inside the dimly-lit round interior, I studied the scrolls on display, protected behind glass.

Hidden by the Essenes

It was mind twisting to think how long these slim scraps of parchment have lasted.

Written between the 3rd century BCE and the 1st century CE, the Dead Sea Scrolls were probably – or at least possibly – hidden in the Qumran caves by the Essenes, a devout and secretive Jewish community that lived and prayed in that remote desert spot.

In the 11 caves at Qumran, about 900 manuscripts would be found all together, including copies of the Book of Isaiah, Deuteronomy and prophecies by Ezekiel, Jeremiah and Daniel.

One of the most complete and the largest is the Great Isaiah Scroll that contains all 66 chapters of the Book of Isaiah.

The memory of passing the exact spot the scrolls had sat for two millennia gave me a thrill, as if I’d driven through a page of the bible itself.

And I didn’t need a notebook to relive the moment. I wondered what other secrets the Judean wilderness has yet to give up.

Later that night when I downloaded my photos, I came across a photo someone had taken of me on Mount Sodom, standing triumphantly on the crest of the cliff. I peered closer.

Was that my notebook in my hand? It was! The last sighting. I must have set it down soon after. Had a gust of wind blown it into the chasm as I sat on the edge? Did it fall behind a rock?

Maybe it will sit in the desert for millennia, preserved in the hot dry air. And centuries later someone will find it, old and leathered, the ink faded and pages clotted together, and wonder, like the goat-herd, if it would make a good pair of shoes.

Travel Guide for the Judean Desert and the Dead Sea Scrolls

The Jewish Essenes sect lived at Qumran during the Hellenistic Period (about 134 to 104 BCE), retreating to this isolated spot to lead a spiritual life.

Qumran is approximately 40 minutes from Jerusalem.

Visiting the Israel Museum in Jerusalem – the Shrine of the Book

Founded in 1965, the Israel Museum is Israel’s largest cultural institution.

In addition to the Shrine of the Book, there are sections for Archaeology, Fine Arts and Jewish Art and Life as well as an outdoor model of ancient Jerusalem from the Second Temple period.

How to get to the Israel Museum. The museum is located in Jerusalem on 11 Ruppin Boulevard, Hakyria, near the Knesset (Israeli Parliament). Visitors can take a public bus, taxi or join a tour.
Tickets are available at the entrance or online. Adults are 54 NIS, children 27.

It’s easy to do a day tour to the Judean Desert and the Dead Sea from Jerusalem. Many tour companies operate trips that include King Herod’s hilltop fortress of Masada and time to float in the Dead Sea.

Visiting Israel and not sure where to go? Here’s a 7-day Israel Itinerary.

For more information on visiting Israel check out Go Israel, the Israel Tourism Board site. My visit was subsidized by the Israeli Tourism Board, all opinions and lost notebooks are my own.

Top ten places to hang out in Toronto
Next Post:Think writing spa reviews is glamorous? Photos that will prove you wrong