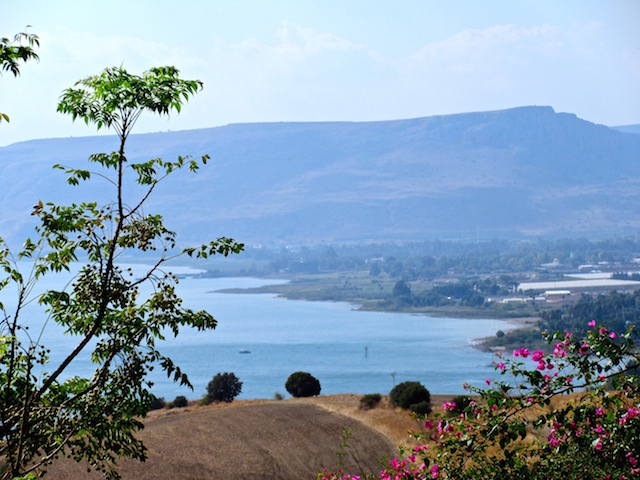 Attitude at the Mount of Beatitudes, a trip to the Holy Land

Luxury travel blog » Places to Travel » Middle East » Incredible Israel » Attitude at the Mount of Beatitudes, a trip to the Holy Land
November 21, 2015 by Carol Perehudoff

Thinking of visiting the Mount of Beatitudes in Israel? If you’re interested in history, Christian sights and a trip to the Holy Land, this spot is for you – but what will you take away?

The sun was deceptively cheerful, shining down on the cypress trees and gardens on the Mount of Beatitudes, giving no hint of the humiliation heading my way. Oblivious, I joined the flow of pilgrims and tourists streaming through the entrance, past the snack bar and along a paved pathway towards the Church of the Beatitudes.

Along the pathway concrete blocks held plaques quoting the Beatitudes, the eight (some say nine) blessings Jesus gave during the Sermon on the Mount.

Where is the Mount of Beatitudes?

Also known as Mount Eremos, the Mount of Beatitudes in Israel is about 75 km (46 miles) from Haifa and 15 km (9 miles) from Tiberius. Believed to be the site where Jesus delivered the Sermon on the Mount, this holy hill on the northwest side of the Sea of Galilee is a popular stop on any trip to the Holy Land and a major hit on the Christian tourist trail.

Did you know? More than 50% of tourists to Israel are Christian

Hurrying to catch up to our small group of travel writers and our slightly-built guide, Paule, I scooted past monks, nuns, a woman in a bright red sari, a tour group wearing matching white baseball caps and a guide holding a gold flag that glittered in the breeze.

This is the Mount of Beatitudes, one of the holiest sites in the Holy Land – and it was a madhouse.

What are the Beatitudes?

If you are one of the rare people who has no idea what the Beatitudes are, like I was until my husband filled me in just before I left for Israel (because clearly, the only things I paid attention to in Sunday School were the cookies and grape juice), the Beatitudes are a collection of familiar, occasionally unfathomable and always compassionate blessings Jesus gave in the opening verses of the Sermon on the Mount.

Exploring the Mount of Beatitudes

I may not attend church regularly (or pretty much ever) but it didn’t stop my excitement about being at the very place Jesus met with his disciples. (Or possibly the very place he met his disciples – who can say for sure?) I’d only been in Israel for a day, but already the vague kindly blur that stood for Jesus in my head had transformed itself into a living historical figure that added authenticity to the biblical stories I’d heard (and should have paid more attention to) as a child.

Now that I was here I was convinced the Mount of Beatitudes was going to be special. Maybe I’d see a sign, or would be charged with some kind of passionate mystical energy. You never know what could happen in a place where legend, faith, nature and history entwine.

Only I have to say, the crowds were driving me nuts.

Give me a pilgrimage

This is why I wanted to escape the tour groups and walk down to the Sea of Galilee like Paule told me the pilgrims did. I wanted to touch the water, as if the drops on my fingers could be a substitute for the stories I didn’t remember.

“Shh!” came a female voice over a loudspeaker as we neared the domed Church of Beatitudes. “This is not just a place to see but a place for prayer.”

The Church of the Beatitudes

Inside, I circled the octagonal church, lifting my head to look up at the golden mosaic dome. It’s an elegant church with a graceful colonnade but, unlike the ruins of a 4th-century Byzantine church down the hill, it’s not an ancient one. Run by Franciscan Sisters it was, curiously enough, financed by the Fascist dictator, Benito Mussolini, in 1937.

“Shhh! This is a place of worship and prayer. Please be quiet,” came the voice over the loudspeaker as I met Paule outside in the shade of an archway.

Paule, an energetic woman with short grey hair, a quick mind and who rocks the Israeli fashion look with an endless array of print leggings, floppy hats, and drapey sweaters motioned around. “The real beauty of this place isn’t the church but the gardens.” She pointed to a small wooden pavilion with a bench shaded by vines. “See? There are places like this all over the complex. These are the special spots.”

She gestured up the hill. “There is a monastery and a guesthouse there. People can come to stay.”

Visiting the Mount of Beatitudes at a lingering pace

It would be nice to sit in a shaded area under the date palms, surrounded by cyclamens and pink bougainvillaea. Or stay overnight and watch the sunset. But right now what I really wanted to do was walk down to the Sea of Galilee.

Sadly there wasn’t time, so we took a short walk through the gardens instead.

The problem with a trip to the Holy Land and the Sea of Galilee is that there is too much to do. Whether you’re a devout believer, a history buff or simply a curious tourist you can only see a fraction of it on a whirlwind tour of Israel – even if you stamp your feet and have a tantrum (which, I confess, if I’d thought it would buy me enough time to do a pilgrimage walk, I might have considered it.)

But then I wouldn’t have time to explore our next stop, Capernaum, the ancient fishing village where Christ gathered his first disciples, so I settled for being quietly grumpy.

Trouble on the Mount of Beatitudes

As our group shuffled back along the main pathway my toe knocked into something. Thinking I’d kicked the back of someone’s shoe, I lifted my foot only to hit concrete. With a shriek, I tumbled forward into the crowd, arms whirling as I tried to find something to hold onto.

Paule grabbed my right arm. One of the other journalists lunged for the left. I was midway to planting my nose on the path, when they managed to steady me and set me upright. An international array of people stopped to stare.

“You tripped over a Beatitude,” Paule informed me wryly. “You’d better see which one it was. Maybe it means something.”

What is your Beatitude?

As my human torpedo act had successfully scattered the crowd, there was now plenty of space to read the Beatitude I’d crashed into.

Persecution? Obviously my persecution was that I couldn’t do a pilgrimage walk down to the Sea of Galilee.

Then I snorted. Really, I asked myself? Does whining because you can’t dip your hands into the Sea of Galilee compare to being imprisoned for your beliefs, becoming an outcast for fighting against injustice or being attacked just because of who you are? 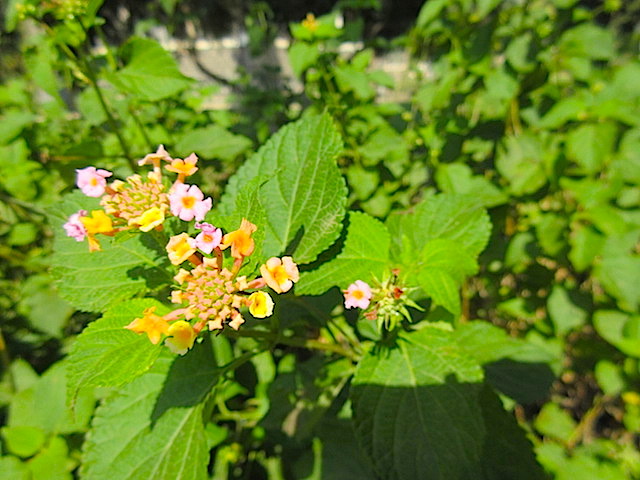 Wake up and enjoy the sunshine

Here I was strolling through the sunshine in the Holy Land, seeing places that had until now only existed as snatches of words and fragments of images in my mind. I should be counting my blessings. The realization of how self centred I was being was a humbling moment, and far more embarrassing than taking a nosedive into a crowd.

But maybe I did learn something from the Beatitudes, I thought, limping to the van. Maybe not every spiritual experience has to be profound and life altering, accompanied by a great boom of thunder. Maybe it can be as simple as a kick in the shin – a reminder to look where you’re going, to remember that persecution happened 2000 years ago and persecution happens today – and that dipping your hands in the Sea of Galilee is not what the Mount of Beatitudes is about.

Besides, I thought, smiling to myself. There’s always Jerusalem …

Where is the Holy Land? Just FYI: While Israel is central to the Holy Land, according to some definitions it can also include Palestine, Western Jordan,The Sinai Peninsula in Egypt and Southern Syria. All sites listed here are in Israel.

When visiting the Mount of Beatitudes: Keep in mind it closes from noon to 2:30 p.m. Time your visit accordingly. In winter it closes at 4 p.m., in summer at 5 p.m. – entrance is free but if you’re driving there is a fee for the car park.

Getting to the Mount of Beatitudes: Driving will give you the most flexibility but it’s difficult by public transport. If you’re not doing a package tour there are many day tours of Christian sites you can take.

Other Christian sites in the Sea of Galilee area:

Capernaum – the Town of Jesus. A visit to the Mount of Beatitudes is easy to combine with Capernaum, an impressive site known as the Town of Jesus on the north end of the Sea of Galilee. A prosperous fishing town in the time of Jesus, it was rediscovered in 1838, and is where Jesus lived and preached, as well as being the home of St. Peter.

Today at Capernaum, a modern church with a glass floor has been built over a 5th-century church that was built over the ruins of the House of St. Peter. Phew! That’s a lot of layers of history. Even more impressive are the restored ruins of a 4th-century synagogue – the white limestone rock and unique double pillars are breathtaking.

Tabgha and The Miracle of Multiplication. Tabgha, also on the northern shore of the Sea of Galilee, is accepted (perhaps symbolically) as the site where Jesus fed 5,000 people with five loaves of bread and two fish. You can visit the 5th-century Church of the Multiplication of the Loaves and Fishes as well as the Church of St. Peter’s Primacy, a modern church built on the site where Jesus is said to have appeared to his disciples after the resurrection.

If you’re looking for more places to visit, here is an ideal Israel itinerary.

The Jesus Trail – If it’s a pilgrimage trek you’re after (and we’re talking a lot longer than the Mount of Beatitudes down to the Sea of Galilee) consider the Jesus Trail, a 65-km (40-mile) trail that begins in Nazareth, ends at Capernaum and covers many historic Christian sites.

Disclosure: My visit was subsidized by the Israeli Tourism Board, all opinions and self-centredness are my own.