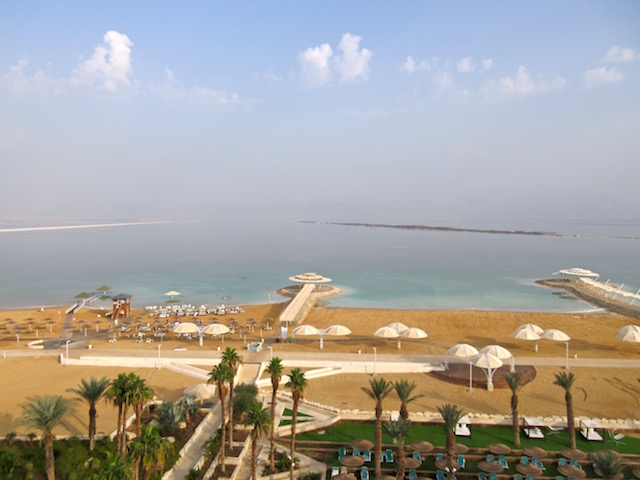 Planning a Dead Sea vacation? When it comes to Israel Dead Sea hotels, Herods Hotel & Spa is, in my humble opinion, the best. And when it comes to healing and hilarity, it’s hard to top Dead Sea salt and mud. Here’s my spa vacay experience.

I slipped my terry towel robe off, threw it over a beach lounger then stepped back in surprise. The beach had been taken over by zombies. Mud-encrusted figures were walking around stiffly, everyone coated in sludge.

“What’s going on? I asked a mother daughter duo I’d met the day before in the sauna at Herods Dead Sea Hotel just outside Ein Bokek in Israel.

I’d just done a mud treatment at Vitalis, the hotel spa, but if Herods was giving out free Dead Sea mud I wasn’t about to turn it down. Containing minerals such as bromide, calcium, iron and sulphur, Dead Sea mud is said to treat a host of health conditions including eczema, inflammation and joint pain. Who knew what other as-yet-unnamed conditions I could stave off?

Planning a trip? Here’s my week-long itinerary in Israel.

Time to get dirty

“Where’s the mud?” I asked a man who, at first glance, I’d mistaken for a chunk of dirt-encrusted ancient pottery.

“There.” He pointed to a blue bucket.

Whoohoo! I reached in and globbed on thick handfuls until I was a walking chocolate pudding.

The mother daughter duo approached me again. “You’re just supposed to put on a thin layer, then let it dry in the sun,” the daughter said.

“Oh. ” My bad. I plodded over to the fresh water beach shower and started rinsing off. Then I noticed all the other dried zombies were rinsing off in the sea. Why hadn’t I thought of that? You get healing water on top of healing mud. A double wellness whammy. Obviously I had a lot to learn about Dead Sea mud protocol.

Or maybe I’d just stick to mud wraps at the spa, where Tania, my therapist, coats it evenly over my body then wraps me up, crooning a maternal “sleep now” as she dims the lights in the treatment room.

But here’s the thing about DIY mud. When it’s slathered all over you, even though you’re doing it for health reasons, it’s impossible not to giggle hysterically and talk to other mud-encrusted guests.

And, as there tends to be some ‘attitude’ at luxury hotels around the globe, I found this mud-inspired non-attitude at Herod’s as refreshing as, er, a dip in the Dead Sea.

When the water breaks the ice

In addition to DIY mud wraps, another good time to meet people during a Dead Sea vacation is when you’re bobbing around in the water. This is because other than float and soak up the goodness of the mineral salts, there’s not a lot else to do in that seriously salty sea.

And what I heard, as I lay alligator style in the water, the soft waves rolling out in streaks of lavender and turquoise, is that when it comes to Israel Dead Sea hotels, Herods Hotel is the best place to stay.

At least that’s what the man from Brooklyn said, and he comes here every year for three weeks to treat his arthritis.

So what makes Herod’s top of the list? Partly, it’s the tranquility. Because it lies about 3 km outside the popular Dead Sea resort town Ein Bokek, in the neighbouring resort community of Neve Zohar (which, from what I could see, is a resort town of one hotel)‎, Herods Dead Sea Hotel has a retreat-like quality that blends well with its otherworldly setting in the barren Judean Desert – part of the larger Negev Desert – at the edge of the Dead Sea.

Also, unlike a lot of Israel Dead Sea hotels in Ein Bokek, you don’t have to cross the street to get to the beach, which means the short stroll to the water is more meditative than mundane.

Part of the Herods Hotel brand, the luxury wing of the Fattal hotel chain, Herods is a 5-star spa hotel with a light breezy decor and a colour scheme that echoes the landscape: The lobby is as beige as the Judean Hills with splashes of Dead Sea blue, and the mosaic floor tiles glitter like muted morning sunshine. 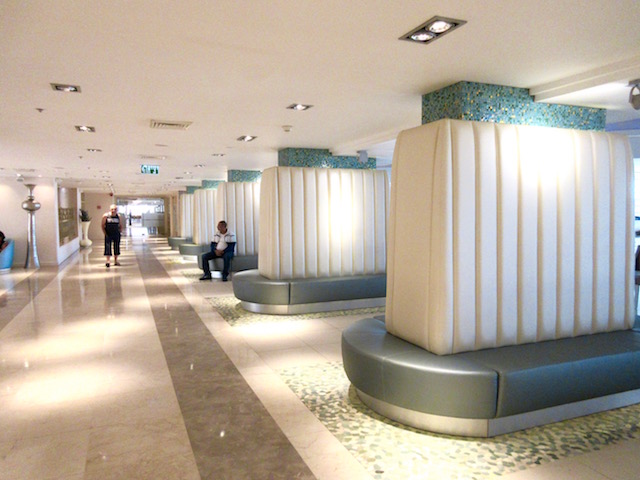 Like most Israel Dead Sea hotels, Herods takes wellness seriously. Its Vitalis Spa is the heartbeat of the hotel. There’s a Turkish bath, a sulphur pool (yes, there are hot springs at the Dead Sea, too), a heated indoor pool with Dead Sea water, a Jacuzzi, sauna and full range of spa treatments and wellness therapies such as mud packs, facials and massages.

Also of note is the glam outdoor pool. The pool area is large and luxe, with palm trees and loungers, but I never hung out there because there is no way I could resist the lure of the beach and the Dead Sea. 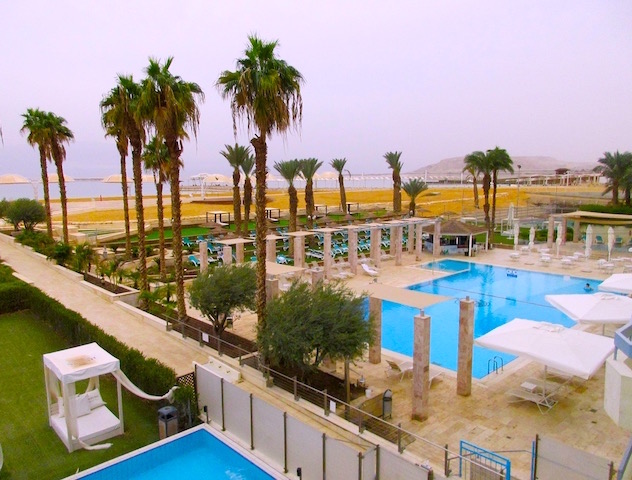 Day 2 of my Dead Sea Vacation

After a buffet breakfast the size of a gazillion plates (what’s with the morning feasts in Israel?), I padded down to the beach. Wriggling my toes in the sienna-tinted sand and the lacy ring of salt crystals that curl around the edge of sea, I clapped my hands together. I had big plans for  the day. In addition to my health-inducing Dead Sea floating I was going to lie in a deck chair and breathe.

That’s right. I said breathe. You never thought breathing could be a tourist activity, did you? But truly, breathing is more satisfying at the Dead Sea than anywhere else in the world.

You’ve heard of altitude sickness, right? How you get ill and dizzy from being somewhere too high because the oxygen is thin? Well. I’m convinced the Dead Sea offers altitude richness. The Dead Sea is the lowest point on earth, more than 400 metres below sea level, and the atmosphere dense, rich in evaporated salt and oxygen.

Therefore, just lying in a deck chair and inhaling is like getting a spa treatment, only cheaper.

Cycling in the Judean Desert

Once I’d completed my recreational breathing (and was now breathing on autopilot), I took one of the hotel’s free bicycles for a spin along the Dead Sea. The region may average 330 days of sunshine a year, but because of my spectacular skill as a weather magnet I managed to attract a rare rainfall.

I could practically feel the barren desert hills around me curling out their rocky tongues, trying to suck in moisture just as I was trying to soak in the elegant emptiness of the desert and the salty healing benefits of the pale Dead Sea.

Travel is never what you expect

Later that afternoon, I stood on my balcony as the setting sun broke through the clouds. The water was a muted silver and a soft haze gave the landscape a mystical quality, as if you could float through the air as easily as in the sea.

It’s funny, I thought. After two days of immersing myself in the Dead Sea’s water, mud and air, I felt connected to it both inside and out. I’d been sure it would be Jerusalem that would affect me the most powerfully on this trip to Israel, yet the closest I’d come to finding the ‘profound’ was here on this balcony, in a luxury resort on the shores of the Dead Sea.

Where is Herods Dead Sea Hotel and Spa?

The 221-room luxury hotel is located in Neve Zohar just outside Ein Bokek at the southernmost tip of the Dead Sea, about an hour and a half drive from Jerusalem. Tel: +972-8-6591591 Visit their website to learn more. 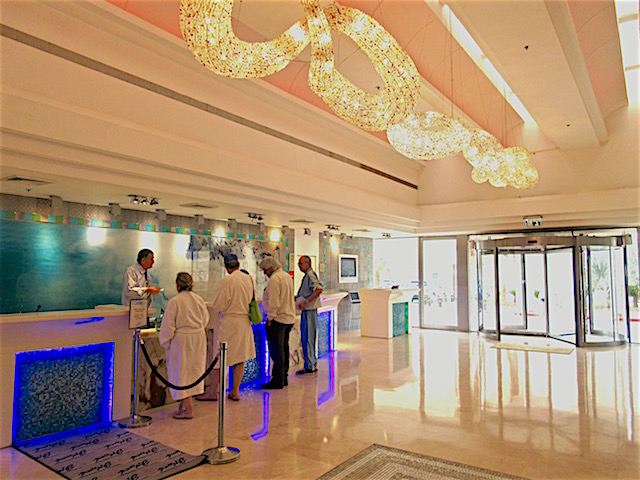 Many of the Israel Dead Sea hotels are located in Ein Bokek. It’s a small  resort town with a few strip malls for shopping, a few restaurants and both public and private beaches.

Most hotels offer buffet style dining only. For a change try the Ranch House or the Taj Mahal.

How to spa at the Dead Sea

The easiest way to soak up the benefits of the Dead Sea is simply to float in the water. Many of the hotels have private beaches but there are easily accessible public beaches, too. A lot of hotels have indoor pools of seawater. Mud is a popular treatment as are massages. Also many hotel spas have separate sulphur pools to soak in for which there is an additional cost. 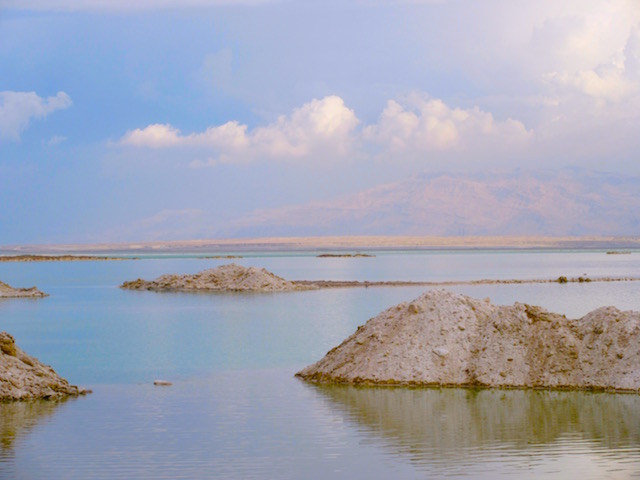 Unless you have a car, this would be tough – but not impossible – to do on your own, simply because the public bus takes about 2 hours to get to Ein Bokek. Mineral Beach is a popular option. As well, many hotels offer day passes to their spa for a fee.

How to get there

The first time I went to the Dead Sea I was on a tour that overnighted in Ein Bokek. The second time I went on my own to stay at Herods. I took the public bus from Jerusalem – and here’s the great part. You tell the driver where you’re going and he drops you off at the best stop. In my case, he stopped right outside the entrance to Herods. The Egged bus company operates most of the intercity bus lines. The Jerusalem Central Bus Station is located at 228 Yafo Rd, Jerusalem. It’s a bit of a madhouse, but easy to figure out.

I was a little worried about this, as most sites on the Internet said I had to take a public bus back to Jerusalem and change to a bus to Tel Aviv. But when I spoke to the front desk agent at Herods, he called and arranged a shared taxi for me straight to the airport.

Think writing spa reviews is glamorous? Photos that will prove you wrong
Next Post:One Day in Washington DC