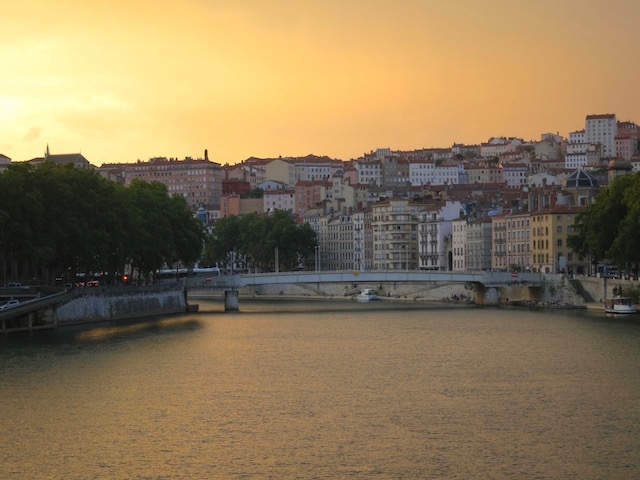 Lyon restaurants and who is this man I call my husband?

Luxury travel blog » Culinary Tourism » Lyon restaurants and who is this man I call my husband?
March 20, 2016 by Carol Perehudoff

Visiting Lyon, France? Often called the Food Capital of the World, it’s the perfect place to dive lips first into food tourism. Here are some of the best Lyon restaurants (and what they taught me about my husband).

As I often say to my husband (at least when he’s not around), I am the exciting person in this marriage. That’s why, during a trip to Lyon, France, one of the great food cities of the world, I had to rethink our roles in the relationship. And it’s all because of Lyon restaurants.

A Canut is a silk worker

I may have looked aghast but secretly I was relieved. It meant I didn’t need to order it. Lyon is famous for its local cuisine, which, while some may define it as cooking the parts of the beast no one else wants, has chefs the world over raving over its authenticity and rustic deliciousness. Perhaps it’s no coincidence that some of France’s top chefs such as Paul Bocuse, creator of nouvelle cuisine, and celebrity chef Daniel Boulud hail from these parts.

Of course, because I am the exciting one in this marriage, I planned to dive into Lyon’s restaurant culture wholeheartedly – as long as it didn’t involve eating an actual heart. Or a nose, hoof or cheek. Okay, maybe a cheek. I was drawing the line at cheek.

“How is it?” I peered at Mark’s face intently as he took his first bite of nose.

He chewed, tilted his head and nodded. “Good.”

Who is this man, I wondered, taking a bite of my not-quite-as-adventurous-but-equally-satisfying Fried Veal Cutlet with Thyme Juice. The man I married has to be dragged to Sunday dim sum in Chinatown and has yet to understand the joy of Korean kimchi. Either his mind had been taken over by aliens or Lyon had ensnared him in its meaty charms.

Lyon, the third largest and one of the most picturesque cities in France, has a long history of eating. Hahahaha. So do I. But hear me out. Sitting at the confluence of the Saone and Rhone Rivers, Lyon is known for the simplicity of its cuisine, the fine ingredients that come from the surrounding regions and for its bouchons, inexpensive family-owned bistros that serve hearty, meat-heavy dishes traditionally served to the city’s 19th-century silk workers – the canuts.

Today, Lyon’s canuts are history but offal has undergone a renaissance and bouchons are hip, gourmet and a key part of any Lyon restaurants tour. If you want to understand the city, bouchons are a good way to start.

The next day we asked the concierge at our hotel to recommend one of the best Lyon restaurants. He sent us to the train station. While your image of train station restaurants may consist primarily of plastic-wrapped egg salad sandwiches, if you’ve ever visited Le Train Bleu Restaurant at Paris’s Gare de Lyon Station, you would know what I know: Someone forgot to tell the French citizenry that train station food is supposed to be bad.

With its Art Deco entrance, white tablecloths and red moleskin banquettes the elegant Brasserie George is an ode to Lyonnaise gastronomy. Opened in 1896, the restaurant sports a legendary list of patrons that includes the Impressionist sculptor August Rodin, the jazz singer Edith Piaff, the writers Jules Verne and Ernest Hemingway, and a tremendously long list of French poets.

If you harbour a deep and abiding love for sauerkraut, Brasserie George is your restaurant. After all, it holds the Guinness World Record for the biggest sauerkraut ever served, a 1.5 tonne lump of it. (Just FYI: It also holds the record for the world’s largest Baked Alaska.)

Mark and I both ordered the Thursday lunch special, Roasted Breast of Guinea Fowl with Cured Ham and Comté Cheese, and while we were eating the moist savoury dish we planned what to do with the hours remaining until dinner.

Of course, because this is Lyon, our activity would involve food. An entire hall of it. We were going to rent bikes and cycle to Les Halles Paul Bocuse.

Les Halles, a vast cathedral of fine food in the 6th district of Lyon, sells just about every type of gourmet product imaginable, from foie gras and black truffles to neon-hued macarons. Mark and I were on a mission, however. We’d been told to sample a pink praline tart at Boulangerie Jocteur.

Pralines are basically crushed almonds and heated sugar, but why they are bright pink in Lyon is a mystery. I like to think it’s a chemical miracle involving rose blossoms, cherry trees and rainbows rather than red food colouring, but if I’m wrong please don’t burst my bubble.

Once we’d sampled our praline, and were able to unhinge our jaws that had been glued together by sugar, we strolled around, wishing we had a reason to buy all the iconic Lyon produce that Les Halles – and Lyon itself – is known for: Bresse chicken, Saint-Marcellin cheese, and sausage  from Charcuterie Sibilia. Instead we bought what was possibly the most expensive fruit salad known to man, went outside, sat on a step and ate it.

That done, Mark and I plotted our next meal. When it comes to the best Lyon restaurants, Paul Bocuse’s 3-Michelin star Auberge du Pont de Collonges is the region’s bright star. Reservations, unfortunately, were impossible to get. No matter, with something like 1800 Lyon restaurants and eateries to choose from, there’s always a Plan B.

Since it was a warm evening Mark and I decided to stroll through the Old Town, a twisty mix of lanes that sits under the shadow of the looming Fourviere Hill. We sat on the terrace at Les Fines Gueules, a bouchon at 16 Rue Lainerie, an amiable cobblestone street made even more amiable by the ‘pot’ of Beaujolais we ordered. In Lyon, a city that insists on being unique, you order a ‘pot’ of wine rather than a carafe, and it’s just enough for two.

There are only two places in the world famous for Quenelles de Brochet, Lyon and Nantua, and since I had no idea where Nantua was I thought I’d best try it here in Lyon. By ordering such a quintessential Lyon dish, I knew I’d truly embraced authentic Lyonnaise cuisine and was now, once again, the exciting half in our marriage.

“You win,” I said, setting down my fork. Lyon might be the ‘lion’ of cities but my husband, his cutlery ready to sink into any animal part you can throw at him, is surely the King of the Beasts.

About Bouchons Lyon is so intent on preserving the tradition and quality of Lyon’s bouchons that it officially recognizes the best. Look for Les Bouchons Lyonnais certificate.

Read more about Lyon. You can’t eat all the time so here’s what to do in Lyon besides eat. Read more: About Europe: Europe’s top destinations. Staying in France? Find out where to go in the South of France.

One day in Annecy, France: things to do, how to get lost
Next Post: Mr Jones bar, Dominick Hotel NYC: cocktails anyone?