This post may contain hotel affiliate links. This means that if you book a hotel through this site I may earn a (dreadfully small but much appreciated) commission at no extra cost to you.

Even if you don’t live like an Austro-Hungarian Hapsburg Emperor on a daily basis, it doesn’t mean you can’t schedule in a few luxury travel splurges when considering fun things to do in Budapest, Hungary. 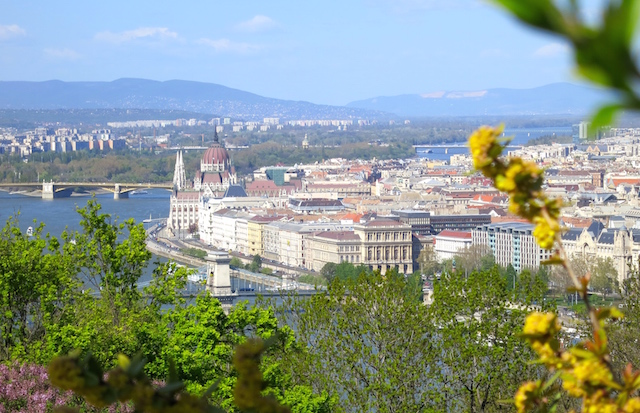 Why indulge in Budapest?

Because there have been so many upscale changes in the city over the last few years, it’s a whirlwind of a ride. And because Budapest is suddenly sexy and elegant (though formerly communist and not nearly as sexy or elegant), and before that, Budapest was ultra elegant as part of the Austro-Hungarian Hapsburg Empire (even if a bit of a poor cousin compared to the snobby court in Vienna).

Do you have to be rich to do Budapest in style?

No. It’s possible to find plenty of splurgy things to do in Budapest even if you’re on a budget (though admittedly, it would be easier if you were say, Drew Barrymore, Adrian Brody or Joaquin Phoenix – all celebrities with healthy bank accounts, at least as far as I know, and who happen to have some Hungarian blood. 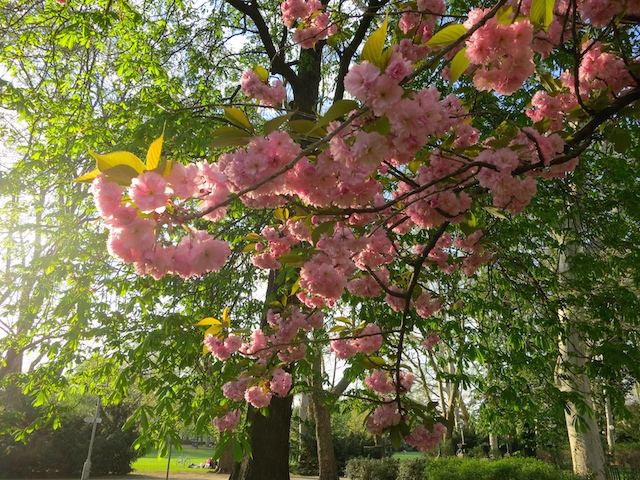 Budapest will put some ‘spring’ in your step

So consider adding a splash of luxury to your Budapest vacation. It’s the best way to experience a unique filmy golden layer that floats over the city like a noble Hapsburg ghost … if, you know, ghosts were golden.

So let’s get to some splurgy things to do in Budapest, Hungary! 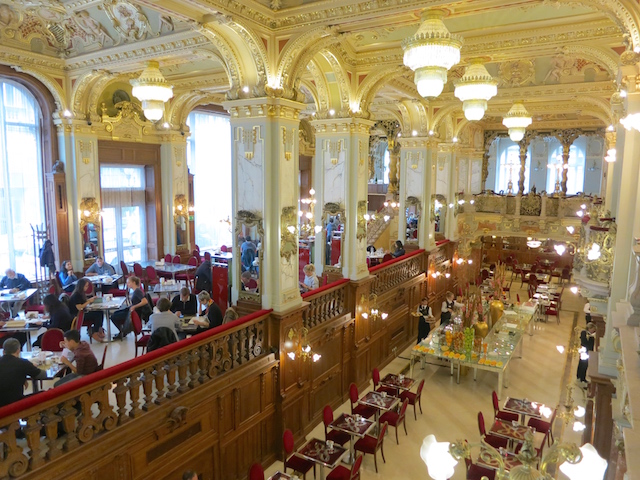 Visit the most beautiful cafe in the world: The New York Cafe Budapest in the Boscolo Hotel

I defy you to find a cafe more grand than the New York Cafe in Budapest on Erzsébet körút 9, 1073. When I visited a few years ago my mouth gaped open, and there may have been some drool involved. Having just revisited the New York Cafe in Budapest, my mouth was still gaping, but at least I held back the drool – obviously some of Budapest’s refinement has rubbed off on me. 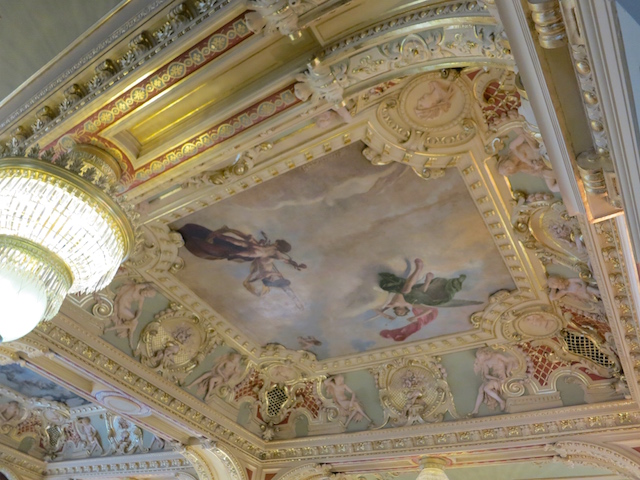 New York Cafe, a favourite with the boho’s

The New York Cafe of Budapest was a favourite of the Bohemian literary set and it’s easy to see why. It’s surreal in its lavishness. The ceiling is all fluttery and gorgeous with 19th-century frescoes by Gusztav Mannheimer and Ferenc Eisenhut.

There are Venetian chandeliers and golden stucco and opalescent marble and weird twisty columns that make the New York Cafe of Budapest look like the natural habitat of both elfin princesses and wicked witches who happen to live in magical castles with cappuccino makers. 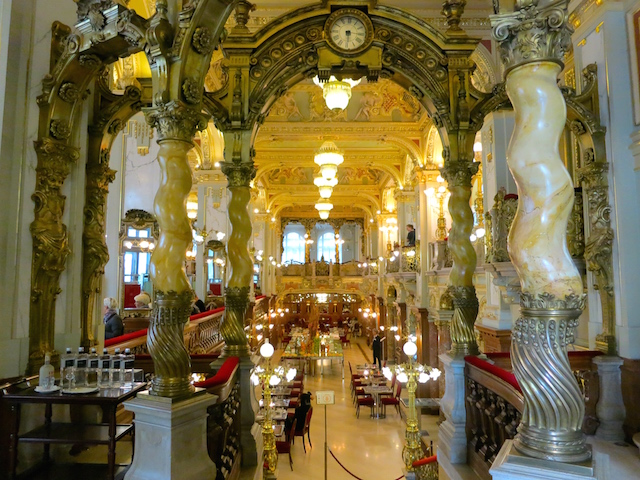 On the day the New York Cafe Budapest opened in 1894, the famous Hungarian writer, Ferenc Molnár, is said to have thrown the keys into the Danube so that it could never close its doors.

And I say, who gave that dude the keys? I mean, if you opened the ritziest cafe in Hungary, would you just hand the keys over to, say, Jerry Seinfeld or Zsa Zsa Gabor (also both of Hungarian descent)? Okay, maybe I’d let Jerry Seinfeld hold them, but only for a minute. And while we’re at it, I wish beautiful Zsa Zsa all the best. 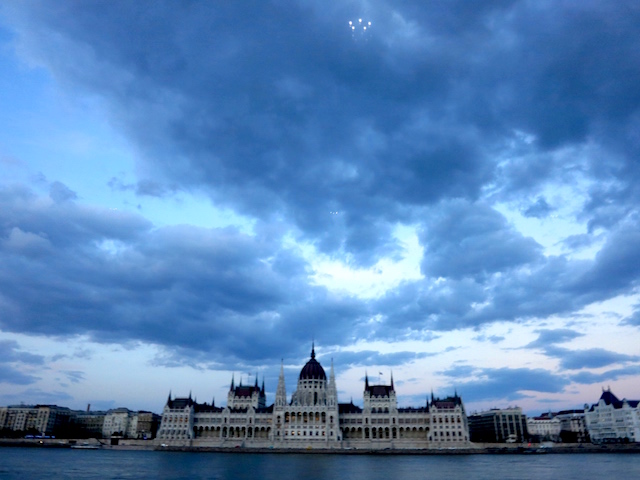 Look at this picture. Now look very carefully up at the top in the centre. I’m pretty sure those are sparkly Hapsburg ghosts

Luxury things to do in Budapest, Hungary – Take a private boat tour on the Danube at night

Surely a private boat is the best way to impress your mistress/toyboy/girlfriend/husband/wife or curly haired pumi, which if you don’t know, is a Hungarian breed of dog. 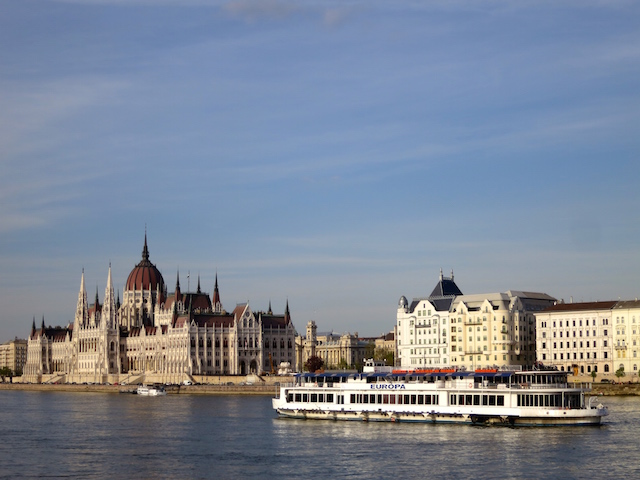 Say, isn’t that the Hungarian Parliament Building? What a unique subject for a photo!

Why a river cruise on the Danube in Budapest?

That’s because the Hungarian Parliament Building is a Neo-Baroque wonder, like a huge mountain of stone icicles topped with red domes and spires. The reason to do a Danube River cruise is so that you, too, can get your fair share of Hungarian Parliament riverside photos. 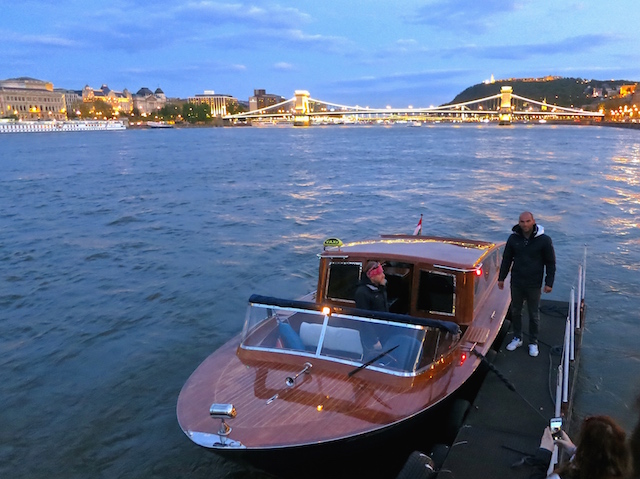 You don’t just rent a boat, you rent a feeling! (Their tagline not mine, but I kind of like it.)

Why a private river cruise in Budapest?

Because it’s fun. Our boat had wood panelling, comfy upholstery, an open air section at the back and plenty of sparkling wine. It’s the quickest way to see how the other half lives, or at least floats, which brings us back to those Hapsburg ghosts …

By the way, the company we toured with is Dunarama. Prices start at 90 Euros for 30 minutes. 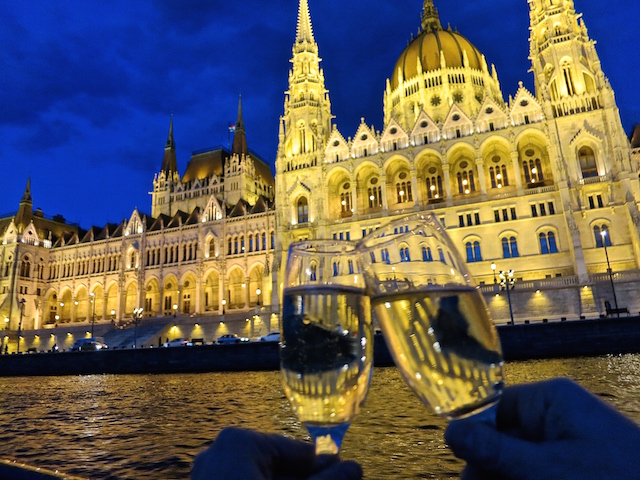 Splurgy things to do in Budapest – Tour the Hungarian Parliament Building

Why do I include the parliament in a luxury tour of Budapest? Because there is bling involved. Yes, Dome Hall in the Hungarian Parliament Building is where the Coronation Jewels are kept – including the sacred Crown of Saint Stephen that has been crowning kings since the 12th century. (Except now there’s no king to crown, but a president.)

Just so you know, kings only got to wear the Crown of Saint Stephen once, on their coronation day. After that they had to wear their everyday crowns. See how royalty is just like you and me after all?

FYI: Guards are present, the type that never move even if you, like, wave a feather in their face. PS: Don’t do that. Leave them alone – they have sabres. 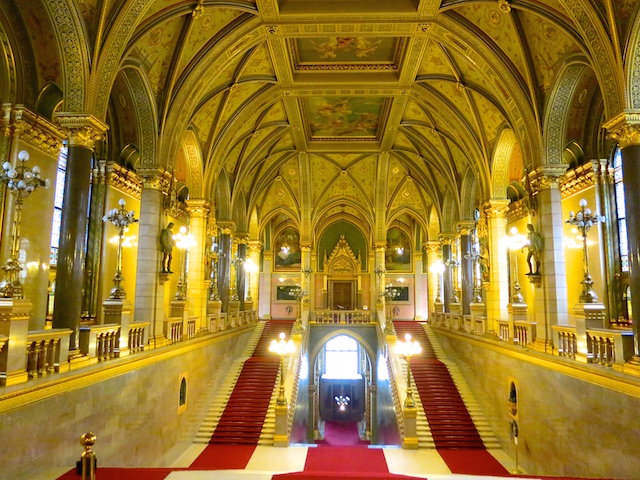 Aside from Dome Hall, you’ll see things in the Parliament Building such as the ornate Main Staircase above. Only special people like queens and presidents get to use it so don’t get any ideas. (But don’t worry, you’re special in my eyes). 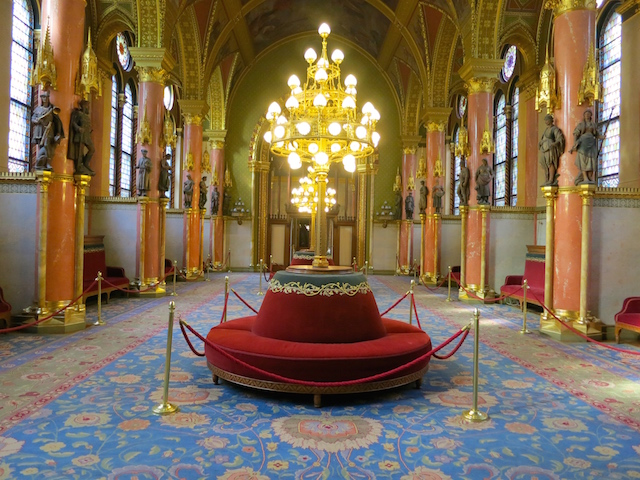 Look at that hand-woven rug

How to tour the Parliament Building in Budapest

Splurgy things to do in Budapest, Hungary – Eat

If you like paprika, you will be spoiled for choice in Budapest. If you hate paprika you’re still going to be spoiled. (And if you like goulash soup as much as I do, you’ll be ecstatic. But I’m limiting my choices to three restaurants. 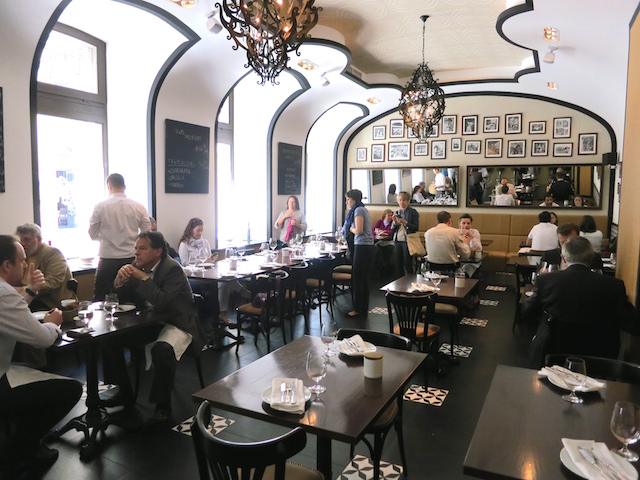 Borkonyha Winekitchen is a 3-star Michelin restaurant, a fusion of French bistro fare and family Hungarian cuisine. And if you want to learn more about Hungarian wine, you’ll be happy to know their cellar includes 200 wines, mostly Hungarian.

Borkonyha Winekitchen is trendy and sleek, with clean lines, a modern feel and an art deco edge, and if you’re wanting to dine well, but watching your budget, go for lunch rather than dinner. (The braised veal cheek, part of my Veal Duet, was so melty and rich I am drooling all over again – and here I thought I had broken that bad habit.) 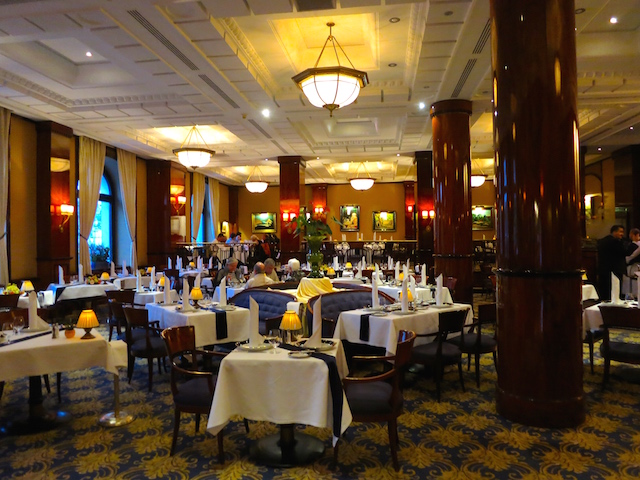 Gundel is a world class experience and one the most immersive things to do in Budapest. It’s not just about the food (but wow, that strudel was something else, even if the Gundel pancake is more famous), it’s that so many facets of Hungarian culture come together here: food, music, art and emus. (I’ll get to the emu in a minute.) 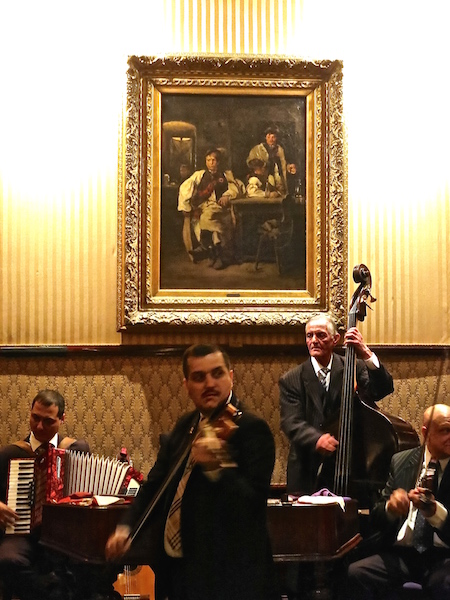 At Gundel you are serenaded by a 6-piece orchestra while sitting in your plush surroundings, gazing around the restaurant at the astonishing Hungarian collection of art on the walls. Check out the painting over the orchestra by Mihaly Munkacsy. It’s worth a cool million dollars.

There is so much gossip about Gundel but I’ll keep it short. It started out as a family-owned restaurant and was immediately a huge success when it opened in 1914. 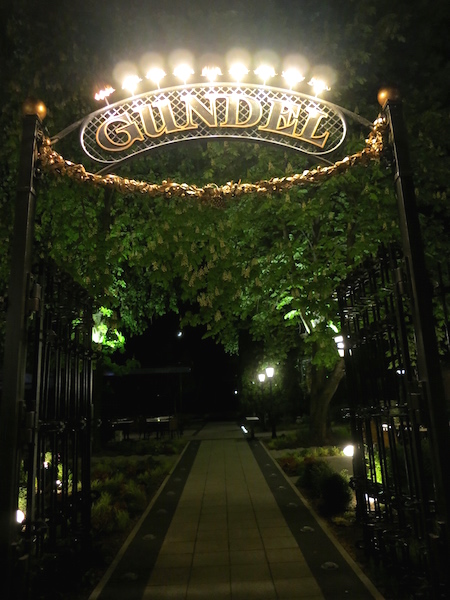 Gundel sits just outside the City Zoo. And once when the President of Turkey visited and security men were everywhere, a python happened to escape from the zoo. I’m fairly sure it was after a Gundel pancake rather than the Turkish President but of course speculation is rampant.

I’ll just name a few celebrities who have patronized Gundel (besides the python. Oh, and once an emu escaped from the zoo, too.)

Can you imagine the dinner party if they were there together? Especially with the emu? And here I thought dinner parties were dull. 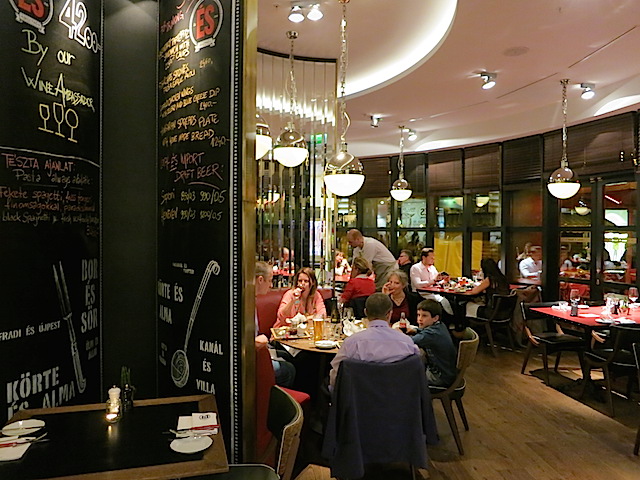 Es Bisztro is on my list because it’s casual, lively and because the name ‘Es‘ means ‘And.’ How can you not like a bistro named ‘And.’

And, their specialty is hairy pig. Seriously. It’s a Hungarian breed of pig called Mangalica with long curly hair and meat that somehow has unsaturated fat – or so I was told, though I’m not completely convinced. 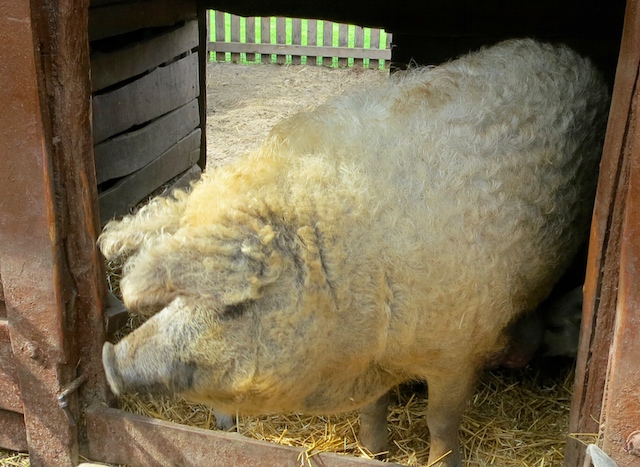 How can you not love this pig?

For more fab food ideas check out this article on the Best Hungarian Restaurants in Budapest by TravelNotesandBeyond.com.

Hairy pig is delicious, but after I saw a live hairy pig at the Lazar Equestrian Park outside Budapest, and saw how ugly and weird-looking she was, sort of like a designer poodle mix gone wrong, that I kind of fell in love with her, and probably next time I visit Es Bisztro in the Kempinski Hotel I’ll have to order a salad. 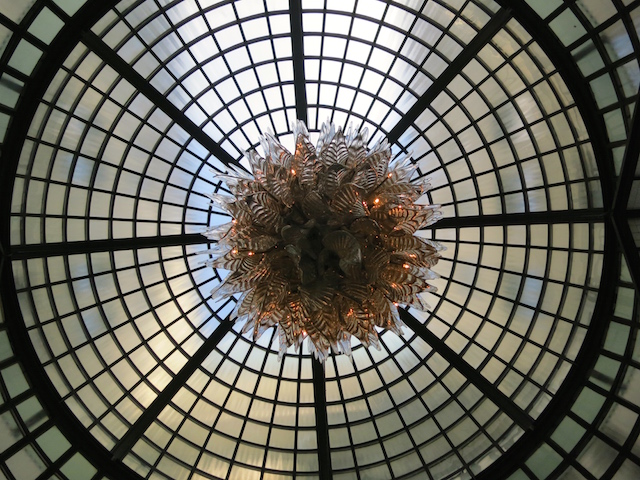 Splurgy things to do in Budapest, Hungary: Where to Stay

When it comes to Budapest hotels, visitors are spoiled for choice. 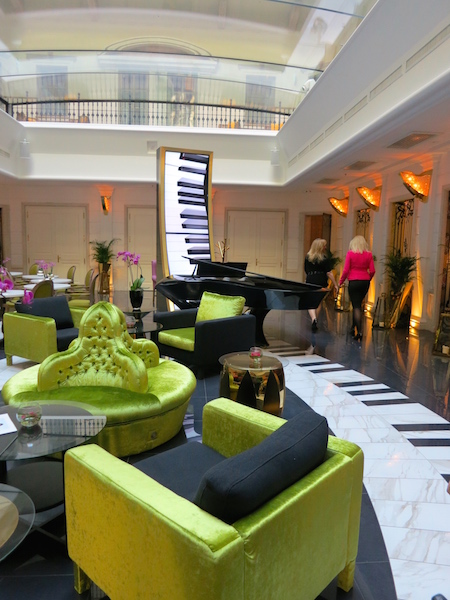 Splurgy things to do in Budapest, Hungary – Getting there in Club Class with Air Transat

If you read my last post (that’s okay, neither did my mother), you may know I went to Budapest with Transat Holidays because Air Transat is starting direct flights from Montreal and Toronto to Budapest on June 17, 2015. I flew Club Class, which is a more upscale way of flying with wider leather seats, more baggage allowance, priority check-in and in-flight meals.

Getting to Budapest more affordably but while still feeling special: Air Transat Option Plus

With Option Plus your seat is in Economy but your trip comes with extras such as priority check in, seat selection, extra baggage allowance and other snacky-type perks. (I’ll be returning home on Option Plus and all I can say is that they’d better have the sparkling wine ready.)

So there you have it. Plenty of things to do in Budapest to tantalize your palate, overload your eyesight and wear out your feet. What more could you ask from a great trip?

Read more about things to do in Budapest:

For more information on Hungary and Budapest visit Go To Hungary.