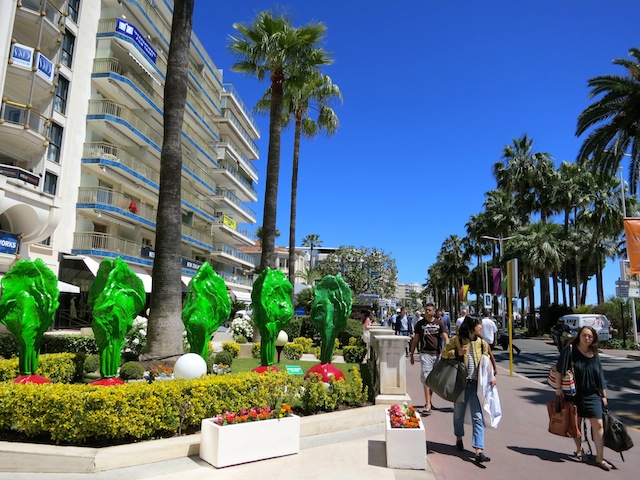 “Oh, look. People are waiting for someone to come out of the Majestic Hotel. I wonder who?” I nudge my friend Kristine as we’re crossing the street on the Boulevard de la Croisette, the major beachside thoroughfare in Cannes where much of the action around the Cannes Film Festival takes place, and where my Cannes 2014 blog report begins.

“Who are you waiting for?” Kristine asks a woman as we pause in front of the hotel.

“I don’t know,” the woman replies with a sheepish look. “We’re just waiting.”

“I don’t know either,” admits the girl on the other side of Kristine.

Cannes is a waiting game

That’s when I realize that the Cannes Film Festival is like Waiting for Godot. If you’re not waiting in line for a movie, you can wait for a star to turn up or for a press conference to start.

Or you can just … wait. Like the crowd outside the Majestic Hotel. Because that’s what the Cannes Film Festival is, a great big star-studded star-watching extravaganza. While some people are obviously busy wheeling, dealing and buying distribution rights, for others waiting in Cannes is an occupation unto itself.

I’d go so far to say that during the film festival, it’s one of the best things to do in Cannes.

There are worse places to wait

It seems like a waste of time but I have to admit, as Kristine and I continue down the Boulevard de la Croisette, that if you’re going to wait, you might as well wait in Cannes.

The weather is balmy and sunny and that particular South of France sharp-shadowed light makes everything seem luminous. The air is fresh and tanged with salt, palm trees are waving, paparazzi are milling and almost everything else you could want to see is here.

The luxury of star-gazing in Cannes

And just possibly – with all the running around we do in our day-to-day lives and the social media we have to keep up with and the late work hours and all the stress and worry of just trying to get through a  day – the fine art of waiting, simply waiting and watching, might be more than a novel way to waste time, maybe it’s a luxury.

The wisdom of the street gawker

Maybe these street gawkers are on to something after all. (Notice how I neatly separate myself from the street gawkers here in a vain attempt to appear as if I’m above things like that.)

Everything happens on the Boulevard de la Croisette

As Kristine and I cross the street and walk back down the other side of the promenade, the beach side, we see a stage is set up and a young man is being miked. At least that’s what Kristine says. I can’t see him.

“The one in the grey T-shirt with red stripes,” she says.

“I don’t see anyone in a grey T-shirt with red stripes!” I say.

Finally Kristine takes off her sunglasses. “I mean the guy in the white T-shirt,” she says.

Two French girls turn around in horror. Another young French woman says, “You don’t know who that is?”

“Uh, no.” But that’s not saying much, because I never know who anyone is. That’s why I carry ID around with me at all times, in case I get confused about myself.

“Oh, good,” I say. Now I’ve officially seen a star. Even if I’ve never heard of him.

A few minutes later, as I’m trying to decide whether to go to Nice for day, explore some other French Riviera cities, or stay here and wait, we notice a swan-like Asian woman posing for photographers. This really is someone. I think. (Not that Jerome isn’t. No offence Jerome fans.)

It’s Jeon Do-Yeon, the Korean actor who is on the main jury along with French actor Carole Bouquet, director Sofia Coppola, Iranian actor Leila Hatami and President Jane Campion (oh, and there’s four men on the jury, too. Let’s give them a big hand for being so successful and cute!).

No sooner do I see Jeon Do-Yeon, and I’m pretty sure it’s her, than I notice two statuesque girls dressed up in  short shorts and policeman caps a few feet farther down the promenade.

They’re putting on roller skates and posing for photographers and getting as much play as Jeon Do-Yeon, because they’re perfect starlet fodder for the (some 4,000) journalists and paparazzi who have descended on this little seaside town.

It’s a perfect moment really, where the talent of a jury member and the short shorts of hot babes get the same level of attention, and it almost inspires me to wait in a line-up somewhere, just because this is Cannes.