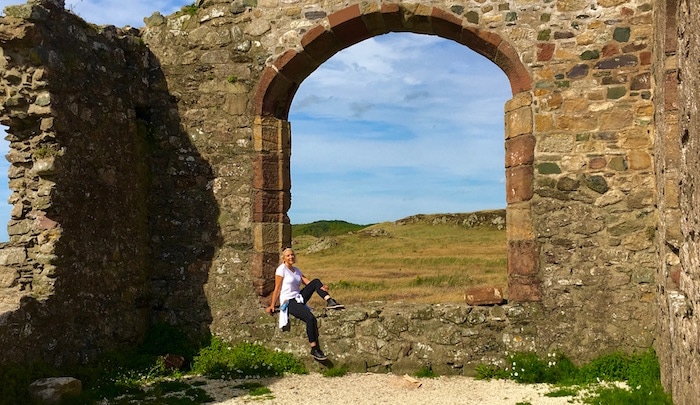 Mystical places, do they exist?

Is the existence of sacred and mystical places hype or reality? Glastonbury is a wacky New Age town that was once one of the most powerful religious centres in England. Even today the ruins of Glastonbury Abbey and the Tor resonate with different types of energy.

Can logic explain everything weird and exciting in this world? Are sacred sights just hype? After more than one strange encounter, I’ve started to wonder: Mystical places, do they exist?

The strange thing about mystical places

An odd coincidence happened after I visited Glastonbury, England, a town in Somerset said to be one of the most mystical places in the world. I picked up Ariana Franklin’s book, Grave Goods, a 12th-century thriller set there.

There’s a scene set in the sprawling grounds of Glastonbury Abbey where the main character, Adelia, picks out a lone spot, the “charred rectangle that had once been a soaring monument to the Virgin” and describes it as a sacred place.

Her companion Mansur, a Muslim eunuch, agrees, saying, “We are on holy ground. This place is an omphalos.” 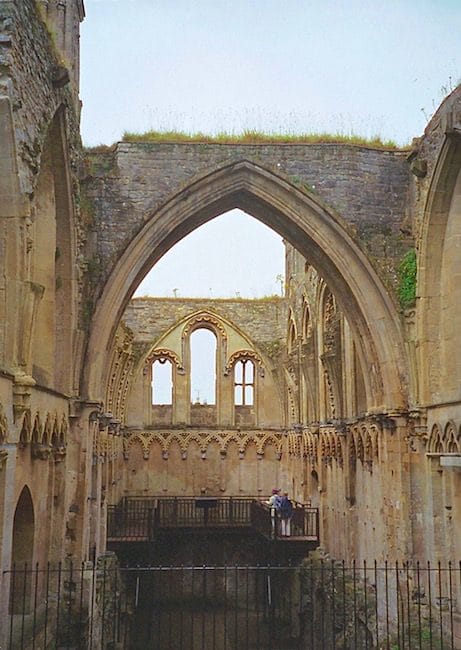 What is an omphalos?

An omphalos, by the way, is like a sacred centre – a navel actually. The ancient Greeks, for example, considered Delphi the omphalos of the world.

But let’s get back to my story. I’d decided to visit Glastonbury on a whim, and without knowing anything about the Abbey ruins, had picked out this exact spot as being meaningful. How it was ‘meaningful’ I didn’t know. I still don’t. But I wrote an article pilgrimage to Glastonbury for a newspaper and here’s what I said:

I walk through the vast crumbling ruins, walls half standing like decaying trees in a forest of moss. The rain stops as I’m standing in the roofless Lady Chapel and I feel a tremendous sense of peace.

The thing is, the abbey grounds are 36 acres and it seems an odd coincidence that both me and the author, or at least the author’s main character, had gravitated to precisely the same spot.

As I stood in front of the chapel I switched on my audio guide, which until then I’d completely ignored. This is what it said:

That was my first foray into the strange existence of mystical places. It was a total fluke I’d ended up in Glastonbury, but after that I started to seek out mystical and sacred places just out of curiosity. Do I 100% believe that there is something to them? I’m not sure I believe in anything 100%, but while there is a heavy dose of skepticism in my psyche, I think that some places do resonate with certain types of energy.

Mystical places are not always fun

If you do go seeking energy spots around the world, know this. They’re not always uplifting. When I climbed up the Tor in Glastonbury, the otherworldly cone-shaped hill behind the town, I wasn’t feeling the love. The mysterious Tor, I’d heard, is where ley lines (lines of magnetic energy) cross. It was supposed to be all groovy and energizing, but I just felt annoyed and grumpy.

The strength of a ley line

It wasn’t until later that same evening I read in a free local magazine how the energy of ley lines can be too strong for some people. This taught me two things. 1) I’m not grumpy … I’m sensitive. (probably also grumpy) and 2) the fact that a ley line had affected me in a way an article said it might, before I’d read it, was another Glastonbury coincidence that made me wonder if mystical places do exist after all.

The power of ki, chi and qi

Between ley lines, ki lines, chi, geomancy and chakra lines, surely there must be something to all this mystical talk. When I was living in Seoul, the Koreans tore down one of the loveliest buildings in the city, a domed stone building that housed the National Gallery. (Don’t worry, they removed the art first).

The building was torn down because it was built by the Japanese who had invaded Korea. The Japanese had situated their building smack in front of Korea’s Kyonbok Palace to block the palace’s ki, or its power.

Ki (or chi or qi) is known as a flow of universal energy. At the time, I thought they were crazy, but now I understand their reasoning completely … though it was a rockin’ building.

Where are some mystical places around the world?

You can visit vortexes in Sedona, see Chichén Itzá in Mexico, fly to Chile’s remote Easter Island, make a pilgrimage to the Temple of Apollo in Delphi in Greece, or head to Cambodia’s Angkor Wat – and that’s just to name a few. I’ve just had the opportunity to visit Llanddwyn Island in Wales, where magic, saintly devotion and a wee bit of vengeance combine to make it one of the most mystical places in Wales.

One of the most unlikely sacred destinations I’ve been to is in Wawel Castle in Krakow, Poland. There is a spot in the courtyard said to have a mystical energy flow that is believed to be the seventh chakra of the world.

Say, what? That’s right. Just as there are chakras in the body, the earth has chakras. What’s a chakra, you ask? It’s like a powerful wheel or circle of energy, and there are seven of them around the world. There is some debate about the location of these formidable energy spots.

Some say they include Mount Shasta, California; Lake Titicaca in Peru; Ayers Rock in Australia; our friend Glastonbury in England; the Great Pyramids in Egypt and Mount Kailash in the Himalayas of Tibet. Wait … that’s only six. That’s because the sixth chakra moves, and it’s currently in Western Europe.

Where is the sixth chakra of the world?

Clearly, in a perfect world, the sixth chakra would be Wawel Castle. The problem is that Wawel Castle is supposed to be the seventh chakra, which is also supposed to be Mount Kailash. Other possible chakra spots include Jerusalem, Rome, Mecca and Velehrad. It’s easy to get confused. I know I am.

Since no one agrees exactly where the seven chakras are located, it could also make you skeptical. Then again, maybe we’re just not evolved enough to have figured things out yet. (Insert grain of salt here. Also insert semi belief. I have room in my heart for many truths.)

Mystical places, do they exist?

Since mystical places are actual places, then yes, they exist. I guess the bigger question is ‘are mystical places really mystical? From my travels I can only say some are, some aren’t, and even the ones that are, might not be. But I’m not ruling anything out. 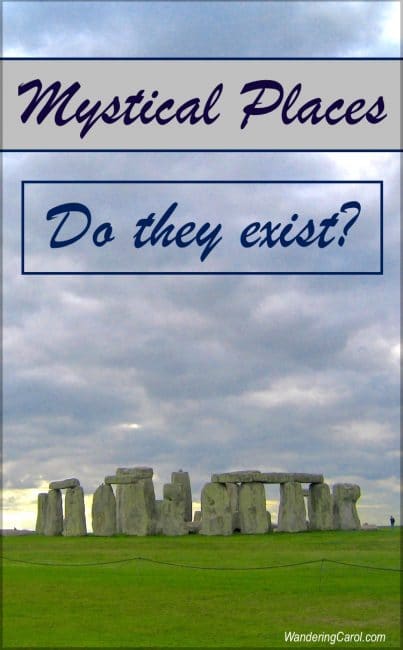 While my Glastonbury coincidences were enough to trigger a lifelong quest to try to answer the question: Mystical places, do they exist, not all coincidences are meaningful. Later on in the same book that started my interest in visiting mystical places in the first place, Grave Goods, the story’s heroine Adelia learns that the Abbot of Glastonbury had murdered his own son.

When she confronts him, he says, “So you are Nemisis.”

The weird thing is, at the beginning of my article about Glastonbury I’d written about the difficulty of finding a hotel room. A hotel clerk had told me everything was full because there was a Goddess Festival going on. And here’s what I wrote in the article: “Well I’m Nemisis, Goddess of Vengeance and Fate, I wanted to say. Any chance you can squeeze me in?”

So. Do I think that both me and Adelia were channeling an ancient Greek goddess? Well, no. But just to be safe, don’t get on our bad side.

Where are some mythical places – as opposed to mystical places?

Is there a difference between a mythical place and a mystical place? Kind of. Think of a mythical place as one that appears in stories, legends and folktales. Whether or not they actually exist is up for debate and varies depending on the place. Let’s look at a few mythical destinations.

For more other worldly destinations, check out my sacred places category page.