Travelling to England? Consider a pilgrimage to Glastonbury, one of the wackiest most spiritual towns in England.

“There a Goddess Conference on,” said the clerk at the third hotel I called in Glastonbury. “No rooms available.”

Well, I’m Nemesis, Goddess of Vengeance and Fate, I wanted to say. Any chance you can squeeze me in?

No where else but Glastonbury would I be competing with over 300 goddesses for a room. This mystical Isle of Avalon is a point of pilgrimage for Christians and Pagans alike. It’s the site of the first Christian church in England, the hiding place of the Holy Grail and the burial place of Arthur and Guinevere. 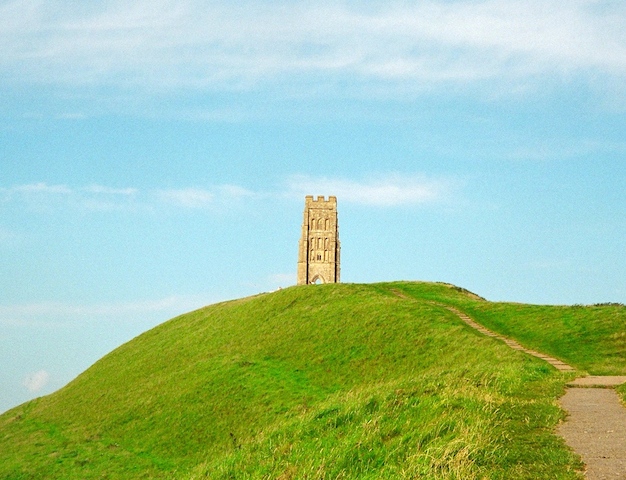 Myths and mysteries on a pilgrimage to Glastonbury

Myths abound in this tiny Somerset town and it’s impossible to weed out the facts. But for many, drawn by ley lines, legends, or even the huge annual music festival, a pilgrimage to Glastonbury is a rite of passage on a spiritual quest. I’m just curious to see if this spirituality will affect me, or if, as I suspect, I’m mystically thick as a plank.

I finally find a room at The George & Pilgrims. A 15th century hotel with a carved stone facade, it’s been housing pilgrims for centuries. A tunnel underneath, now blocked off, once connected it to the once mighty Glastonbury Abbey down the street.

A miniature statue of Henry VIII stares out at me defiantly from the wall of my Henry VIII room. Too much patriarchal energy for the goddesses? Maybe that’s why it’s available. I’m surprised pilgrims would want it either, as it was Henry VIII who caused the destruction of the Abbey after his break from the Roman Church.

A word with Oddvar, the Norwegian desk clerk who has made Glastonbury home, assures me that Henry didn’t actually stay in the room. If he did stay at the George, and that is debatable, it would have been in what is now the lounge on the main floor.

From my 500-year old window, I look out over flocks of goddesses in colorful flowing skirts. Here to celebrate womanhood, no doubt. I’m a bit lonely with nothing but the statue of Henry for company so I decide to join them. I’m female, what more credentials do I need?

I head to the town hall and leaf through a program. Labyrinth Ceremonies, Goddess Alphabet Dance Meditation, Weaving the Goddess E-Web….I don’t understand a thing, but decide to sign up. Until I learn the price. Forty-five pounds for one day. Reluctantly, I forgo goddess kinship for the solitary role of a pilgrim. It may be lonely, but it’s free. 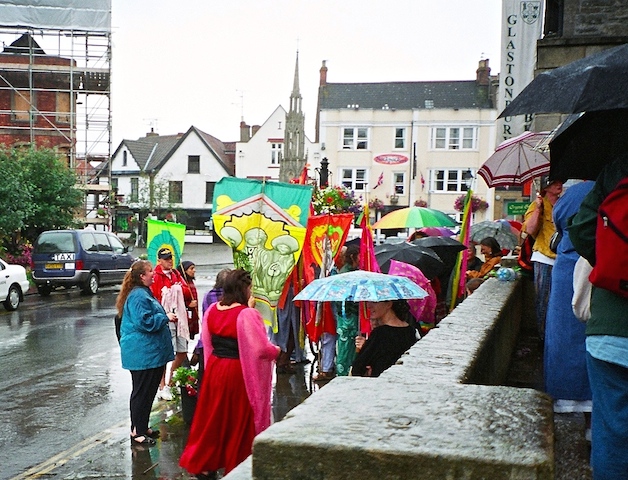 Wish I were a goddess!

I head instead to the Tor, the strange grassy hill which rises like a cone behind town. I follow the posted arrows, but instead of the paved footpath, I end up on a rambling dirt trail which winds around the back of the hill. The morning light slants across the path, the brush is rich with the smell of damp greenery and smoky traces of campfire. And it’s not without danger either–a grunting pig behind a hedgerow scares me half out of my wits.

Finally I reach the base and start climbing. Some say the Tor is hollow, dwelling place of the fairies. Others think it’s the entrance to the underworld. Panting when I reach the top, I flop on the grass and look out over the Vale of Avalon. Pale green fields stretch like waves, merging into a hazy blue sky. In the shade of the 15th century tower behind me, the only remains of a much older chapel, a man softly strums the guitar.

It should be tranquil but it isn’t. Either I’m adversely affected by the ley lines which intersect here, or I’m sensing the lingering spirit of Richard Whiting, the elderly abbot who was dragged up to Glastonbury Tor and hung in 1539, thanks to Henry’s Dissolution of the Monasteries. It’s a gruesome image for such a pastoral view.

On my way down I meet the minstrel guitarist, Murray, and his girlfriend, Wendy. Together we decide to go to the Chalice Well. Wendy tells me that just before she met Murray, she was doing her fairy cards, and turned up the pixie, which signifies unconditional love. So here I am off to an ancient well with a fairy and a pixie. My spirits perk up. 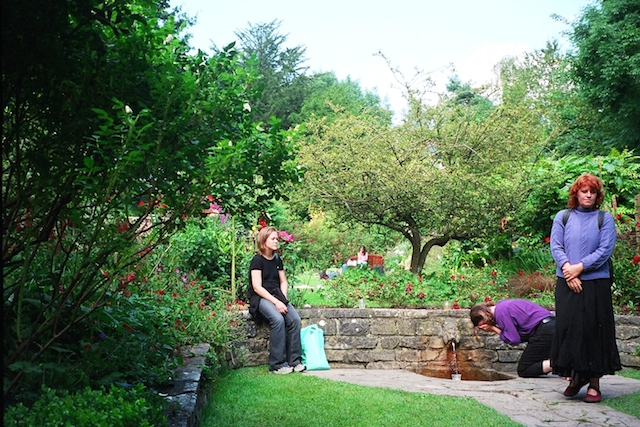 In the Eden-like Chalice Well Garden, I dip my feet into the healing Pilgrims’ Bath, then drink three cold glasses filled from a Lion’s head spout. Wendy and Murray decide to stay for a spot of meditation, so I stroll to the back of the garden. Surrounded by the fragrance of roses is the well head, the source of the spring. Joseph of Arimathea, the Virgin Mary’s uncle, hid the Holy Grail here. Either that or in the hills behind. We don’t know for sure as it’s never been found.

The next morning I slog through a downpour over to the town hall for the goddess procession up to the Tor. Not only is it open to the public, it’s free. The crowd huddled in the doorway doesn’t look as if it’s marching anytime soon, so after waiting around for twenty minutes I head around the corner to the Abbey.

Glastonbury Abbey – an important stop on your pilgrimage to Glastonbury

It’s a different world in Glastonbury Cathedral, silent and serene. Under the protection of my umbrella I walk through the vast crumbling ruins, walls half-standing like decaying trees in a forest of moss. The rain stops as I’m standing in the roofless Lady Chapel. I feel a tremendous sense of peace.

The Lady’s Chapel rests on a potent spot, my audio tape confirms it. Joseph built England’s first Christian church here in AD 63–a mud and wattle hut dedicated to Mary.

Outside, on a smooth stretch of grass, a plaque marks the original tomb of Arthur and Guinevere. A leaden cross buried with them (which vanished in the 17th century) certified that, Here lies the illustrious King Arthur buried in the Isle of Avalon. 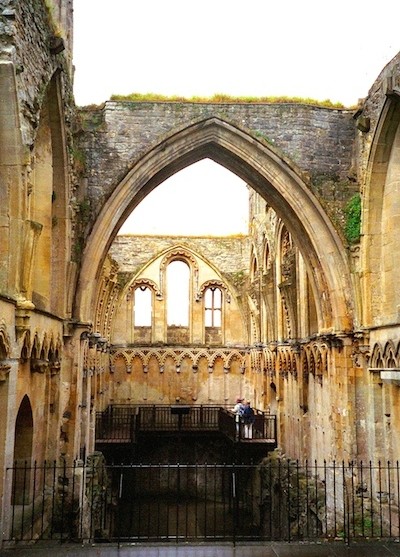 In reality here lies controversy–perhaps the oldest tourist trap in existence. The monks of Glastonbury Abbey found the grave in 1191, conveniently when money was needed to rebuild after a devastating fire. What better way to attract pilgrim coffers?

Hungry from myth hunting, my pilgrimage to Glastonbury ends on the town’s High Street for a meal at the Spiral Café. Over chick pea stew, I chat with the British couple beside me. In his lavender shirt and pressed beige pants, I’d pegged Mike for a tourist, but he’s well acquainted with Glastonbury, and has accompanied his wife Liz to the Goddess Conference. Mike’s beliefs are hard to define, but universalist with neo pagan and Gnostic tendencies comes close. Liz prefers a female divinity.

“It’s a feminine energy, here,” she says. “The hills form the shape of a reclining woman.”

That explains the goddesses. And here the woman at tourist information told me it was because the Tor was in the shape of a breast. But Liz informs me that Glastonbury is an age-old centre of goddess worship. Avalon is Morgan la Fay’s kingdom, and though she’s usually seen as Arthur’s enemy, she was also a healer; it was here she brought him to tend his mortal wounds.

With a surge of satisfaction, I recall that it was the Lady’s Chapel that affected me the most deeply. In my own way I’m celebrating the female spirit, too.

The restaurant fills up and two German women sit down at my table.

“Here for the conference?” they ask.

“No,” I say cheerfully, moving over to make room. I may not be a goddess, or even close, but it’s nice to be mistaken for one.