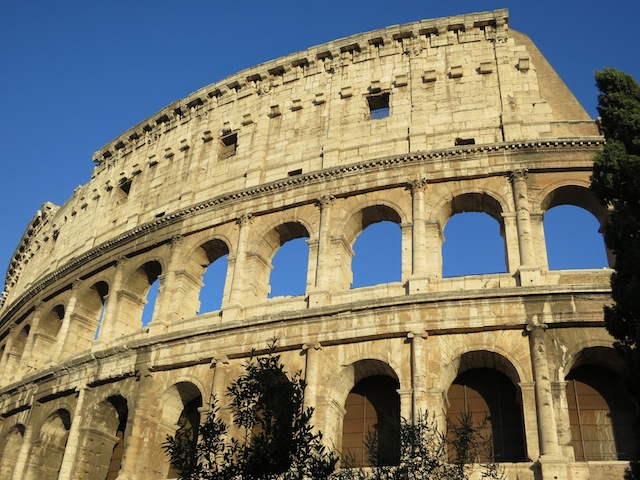 Is the Roman Colosseum falling down?

Is it true? Is the Roman Colosseum falling down? If you’re planning to visit the Roman Colosseum, you need to read this Roman travel blog post first because there are things you should know. Recent reports say that the south side of the Colosseum is about 16 inches (40 cm) lower than the north side and this, dear friends, could mean very bad news. It could mean the end of the world! 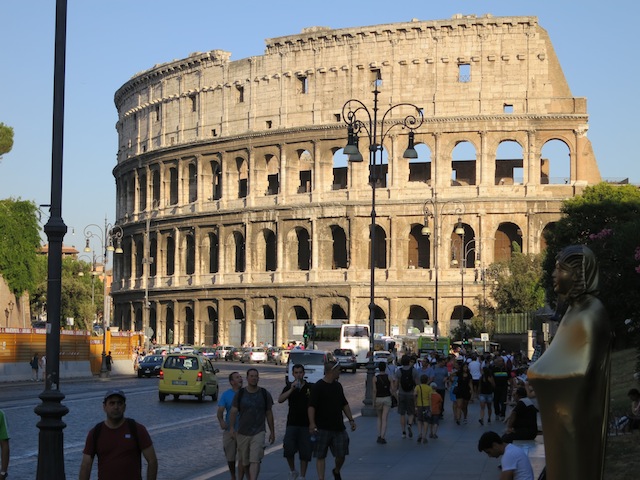 Why the Roman Colosseum falling down could mean the end of the world!

If the Colosseum falls down we are in trouble. This is because of an ancient prophecy delivered by a medieval monk known as the Venerable Bede that says:

See what I mean? The world is in trouble.

Who was the Venerable Bede and why should we listen to him?

My goal? To determine whether it’s true that the Colosseum is falling down and leaning precariously, or if it’s all a ploy to take over the ‘leaning’ tourism business from Pisa. Once I have determined the facts I will come up with a plan to save the world. 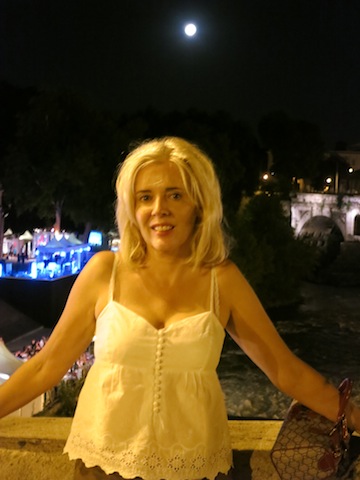 Carol has a bright idea to save the world

Essential facts about the Colosseum

Built around 80 A.D. (note the impressive use of A.D. and give a nod to the Venerable Bede), the Roman Colosseum is the largest amphitheater ever constructed and was used for gladiator fights, executions, dramas and even mini sea battles.

The opening ceremony for the Colosseum lasted 100 days. The best seats were up front. They were reserved for the posh set: your Emperors, your senators, your Vestal Virgins and your priests. About 5,000 animals were slaughtered at the festivities. Hey, I guess we all have our own ideas of a good time.

A brief note about gladiators at the Roman Colosseum

Gladiators were big heros, often prisoners of war who were given the option of becoming slaves or fighting. Fighting brought them the adoration of many women (who will henceforth be known as ancient-era  groupies), who would sometimes pay big money for a night with a big hunking killing machine. As I mentioned, we all have our own ideas of a good time. 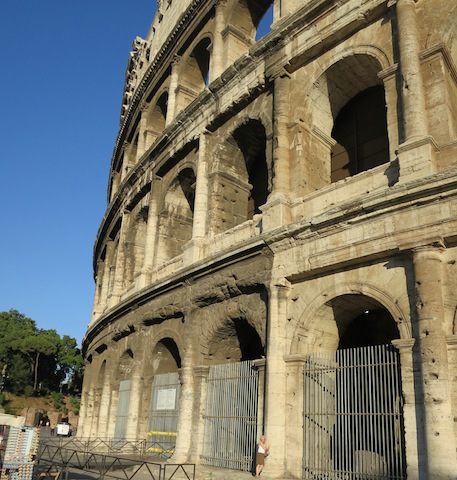 The things I do for humanity

Once I was in Rome, it was time to run some tests on whether the Roman Colosseum is falling down or not. These are highly scientific and learned strategies I’m using, and I hope the Venerable Bede would be impressed.

Is the Roman Colosseum falling down Test #1 – The Push Test – as you can see in the photo above. 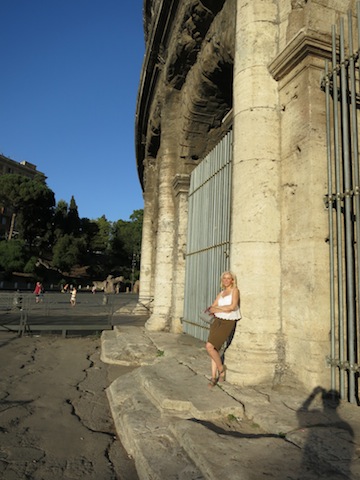 Is the Roman Colosseum falling down Test #2 – The Lean Test – as you can see in the photo above.

Conclusion: This revealed that the Colosseum is still quite sturdy.

The Looking Up Test shows that there are pieces missing from the Colosseum. Further research tells us that the Colosseum is really just a shell of its former glory. That it was once covered in glorious marble travertine slabs. That there was beautiful statuary. However, this is nothing to the discovery I have made. The discovery that will save the world.

When the Colosseum was built it wasn’t called the Colosseum at all, but the Flavius Amphitheatre. So, could it be possible that the Venerable Bede was in fact, referring to the gigantic statue of Nero, the Colossus, which towered some 35 metres high next to the amphitheatre?

Apparently the Colossus was destroyed centuries ago, so if the Venerable Bede was correct, maybe the world has already fallen. And maybe we don’t even exist anymore so we don’t have to worry since we’re all figments of our own imagination anyway. Yay! We’re saved. Either that or the ancient prophecy about Rome falling when the Colosseum falls is erroneous. Let’s hope so.

However, if the Venerable Bede was right and was referring to the Roman Colosseum after all, rest easy

The famous Roman Colosseum is undergoing restoration work and experts predict it will not fall down. So even if we don’t exist, we will still be able to visit the Colosseum for centuries to come.

The Colosseum is next to the Roman Forum and Palantine Hill. Tickets are sold as a combo and are valid for 2 days. We bought our tickets at the Colosseum ticket office but Roman Colosseum advanced tickets can be purchased at Coop Culture.

The Roman Colosseum is one of the most visited tourist attractions in Italy so try to go early or late to avoid the crowds.

Where to stay in Rome: We loved the Rome Cavalieri. I did not love staying around the train station.

The Vestal Virgins of Rome and the Temple of Vesta
Next Post:Umbria: Falling for Ferentillo