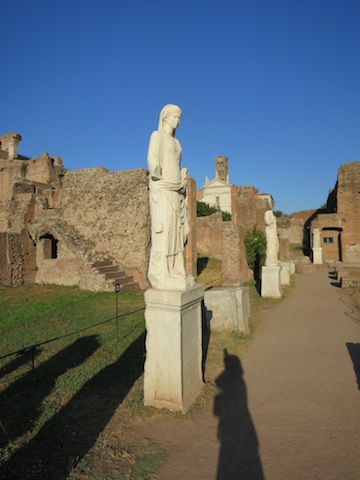 The Vestal Virgins of Rome and the Temple of Vesta

Luxury travel blog » Places to Travel » Europe Travel » Italy » The Vestal Virgins of Rome and the Temple of Vesta
August 8, 2012 by Carol Perehudoff

You can’t shed the blood of a Vestal Virgin without angering the gods. That’s why the Vestal Virgins of Rome were buried alive if they got caught fooling around – no blood was spilled but they still got their punishment. (They also got a loaf of bread in their tomb, not that that would be a great comfort.)

Aside from this obvious pitfall of being a Vestal Virgin of Rome, they still had it pretty good. They were celebrities.

The Vestal Virgins of Rome, the starlets of ancient Rome

The Vestal Virgins of Rome got front row seats at the theatre. They had a lovely temple, the Temple of Vesta, and a palatial house next to it in the Forum. Mark, my fiancé and I just visited the Forum after the excruciating heat of the day had died down.

(It’s 36C in Rome today! Yikes! 37C tomorrow!) Actually, even at 6 p.m. it was blistering and we wandered around in the heat and couldn’t find the Temple of Vesta, so Mark finally ditched me to get to the Colosseum before it closed.

Woe betide a man who messes with a Vestal Virgin

Personally I think Mark was avoiding the temple to avoid temptation. If a man was caught consorting with a Vestal Virgin of Rome he was flogged to death – and there were no worries about his blood being spilled.

Who were the Vestal Virgins of Rome?

The Vestal Virgins of Rome, fascinating to some, not so much to others

It’s not even that hard to find. How did I miss it? I blame heatstroke.

The Temple of Vesta and the grounds around it is such a special peaceful spot in the chaos of Rome, with flowers and pools and statues of famous Vestal Virgins.

In addition to the Eternal Flame of Rome, the Temple of Vesta housed the Palladium, an effigy of the Goddess Minerva, thought to have been brought from Troy,

I tried to imagine the Vestal Virgins of Rome wandering around, stopping to smell the rose petals or stoop to run their fingers through a pool. I wish I knew who the individual Vestal Virgins were.

So just who were these famous Vestal Virgins of Rome?

The Vestal Virgins were chosen from aristocratic families before the age of 10. In addition to keepting the sacred fire within the Temple of Vesta burning, the Vestal Virgins also took part in festivals, preparing Mola Salsa, a mixture of salt and flour that was sprinkled on sacrificial victims. Nice.

The future  of a Vestal Virgin burned bright

After 30 years of being a Vestal Virgin they were able to marry, and it was a big status thing to win a Virgin – though not, obviously, before her tenure was up. It didn’t matter how old she was or if she could bear children, she was still a prize. And this, if you ask me, is a sentiment that still makes perfect sense today. We’re all prizes, no matter our age. We all deserve prime theatre tickets. And perhaps there is a little Vestal Virgin within each of us.

Opening times for the Temple of Vesta:
The Roman Forum is open from 9 a.m. to 7 p.m. A combined ticket that includes entry to the Palatine and the Roman Colosseum is €12.

Where to stay in Rome: We loved the Rome Cavalieri Hotel.

Read more: about the Top Cities worth visiting in Italy

For more of top European destinations: visit Best places to visit in Europe

Rome Cavalieri Hotel, a place to escape the crowds
Next Post:Is the Roman Colosseum falling down?