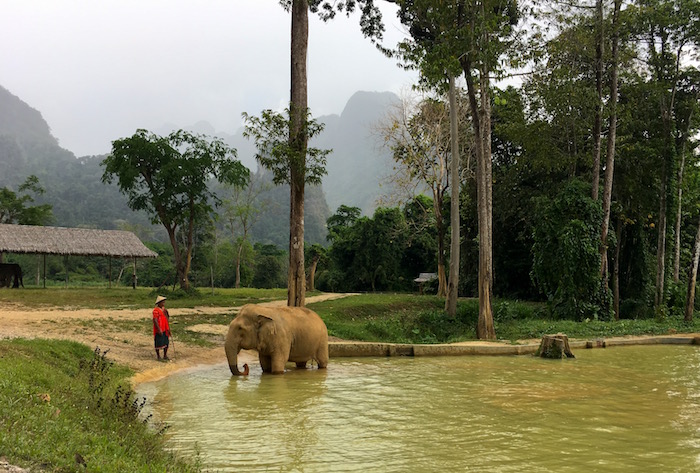 Looking for an outdoor adventure in Thailand? Elephant Hills Tented Camp, two hours from Phuket, is an award-winning luxury jungle camp that offers an ethical animal experience in a remote jungle setting. 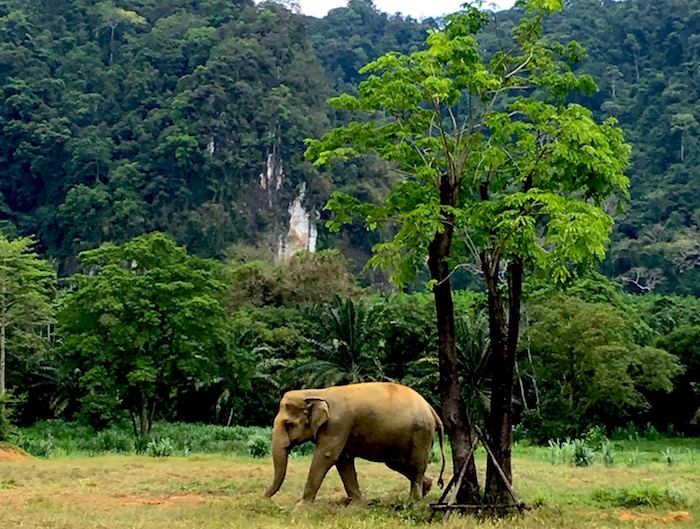 Turns out I’m pretty good with a machete. This comes in handy when preparing a meal for an elephant. I look up from my table at the sky. Ominous clouds are threatening, the air is hot and humid and the craggy mountains of Khao Sok National Park are hemming me in. It couldn’t feel more exotic. Now let’s just hope my elephant likes her lunch.

Elephant Hills Tented Camp in southern Thailand is a non-exploitive animal experience that won a Thailand Green Excellence Award for Animal Welfare in 2014, 2015, and 2016. It’s also a luxury experience, though I wouldn’t call it ultra glam. Let’s call it ‘basic luxury,’ as in comfy bed with crisp clean sheets in your tent, electricity, attached bathroom with shower, and private outdoor seating area. There is also has a central communal area with an open-air restaurant and an outdoor pool.

Things to do at Elephant Hills Camp

You won’t be spending much time at the pool. Aside from the elephant experience there are treks in the hills, lazy trips down the Sok River, Thai cooking demonstrations, cultural dance shows and elephant documentaries to see. There is also the chance to travel deep into the jungle interior to the Elephant Hills floating Rainforest Camp at Cheow Larn Lake, one of few floating camps in the world.

The real luxury at Elephant Hills is the setting: sheer cliffs that look as if they’re dripping ink, strange karst formations and foliage as thick as a hipster’s beard.

It’s also the chance to interact with Asian elephants in a respectful way, and of having the satisfaction of knowing the resort’s 16 elephants have plenty of room to roam and forage. Each elephant has its own full time mahout, an elephant handler, so that each animal has a sense of continuity and security.

Looking for other great places to stay? Read Best Resorts in Thailand 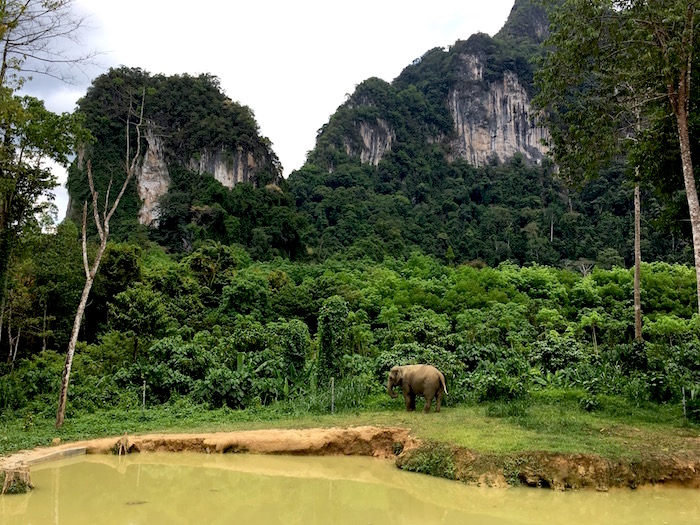 A honeymoon destination in Thailand

The ethical treatment of the elephants is one of the main reasons Elephant Hills Tented Camp and its sister camp, the Rainforest Tented Camp on Cheow Larn Lake, are so popular with adventurous honeymooners, and if I meet one more happy couple I’m going to take my solo self into a corner and cry.

But don’t worry. They’ll be tears of joy, because there are plenty of things to fall in love with at Elephant Hills besides a partner. 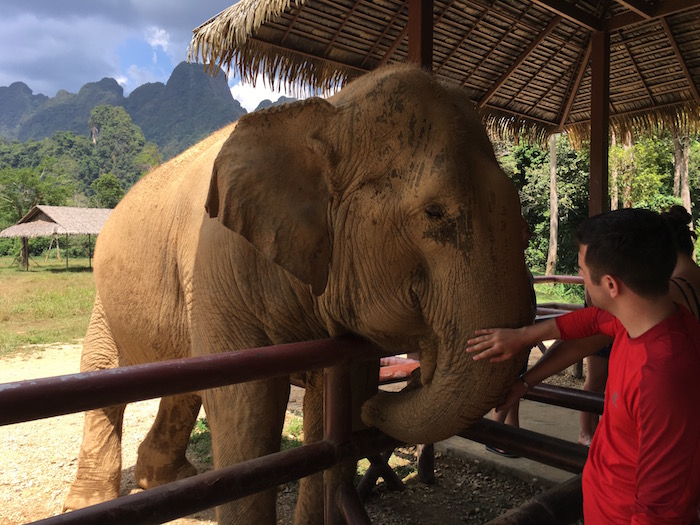 This gentle interaction between elephants and guests means there is no elephant riding and the elephants don’t perform tricks. Your time with them is limited to approximately  1.5 to 2 hours.

How do you interact?

You’ll be watching the elephants splash around in their mud pool (although I only saw one, as the others didn’t feel like it that morning). You’ll help scrub them down with coconut fibres to clean their leathery skin and prepare them a fresh meal. 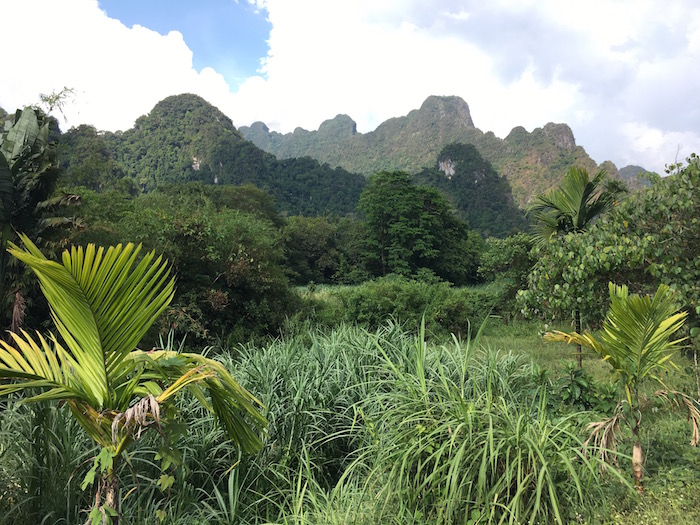 The elephant scrub down has some complications

Armed with buckets, I’m teamed up with a middle-aged British couple to scrub down an elephant named Tidtang. Tidtang accepts the attention as her due, and reminds me of a dowager Queen Victoria getting dressed by her attendants.

The problem is the male half of the British couple. I think he has a vendetta against me. Either that or he thinks I look dirtier than Tidtang because he kept tossing buckets of water over her muddy back and on to me, leaving streaks of mud down my shirt and soaking my hair.

I try not to take it personally. It’s a mud bath, I tell myself. People pay top dollar for spa treatments like this.

Then he does the same thing to his wife. “Thanks for that,” she says, and I realize he’s just taking his scrubbing job very very seriously. I’m sure Tidtang appreciates it. (Unlike me or his wife.)

After scrubbing we watch the elephants lumber around their grassy field. Within five minutes two of the elephants – I swear one is Tidtang – take a great trunkful of rust-coloured dirt from the ground and spray it over their backs. I don’t dare look at the American man’s face. I know I’ll roar with laughter because all his hard work has gone to waste and then everyone will know I’m not a team player.

(I sometimes struggle with being a team player.) 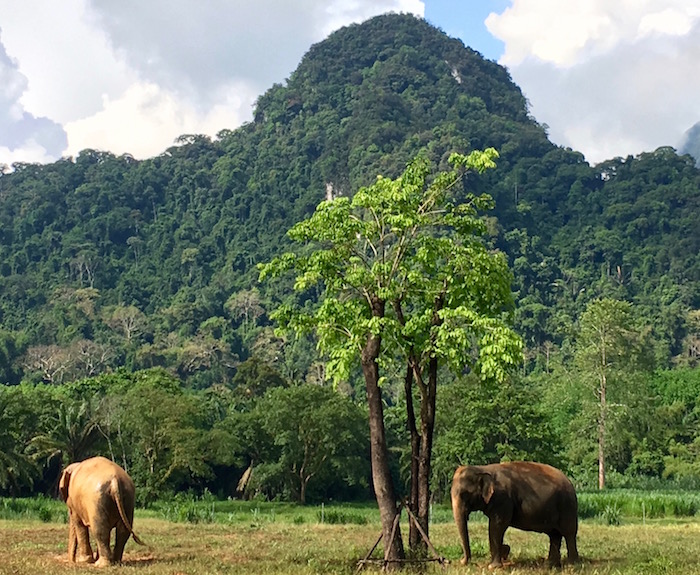 If you like wielding a machete preparing a meal for an elephant is great fun. At least it is until I split a pineapple and half of it goes flying across the room. In my defence I’d like to stress my pineapple projectile did not hit anyone, leastwise the British man, and that no animals were harmed in the process. I was just taking my food preparation job very very seriously.

Once we’ve prepared the food in our ‘human viewing area,’ which is sort of like a picnic shelter, we take our filled baskets to the wooden counter that surrounds us. The elephants trundle over expectantly. I’m holding out a bundle of tamarind, ready to feed an elephant named Moddang. Ignoring my hand, she reaches her trunk over the counter and gives me a great sloppy kiss on my breast.

The blotch, combined with the mud streaks, makes me look like the world’s biggest loser of a wet T-shirt contest, but Moddang doesn’t seem to mind, not when stalks of sugarcane are involved. I don’t mind either, because not only have I had a fantastic up-close experience with the elephants, I’m one of a few people on earth who can say an elephant groped her breast.

What is included in your package?

Packages at Elephant Hills are all inclusive. Meals, activities, transfers and accommodations are included – pretty much everything but tips and souvenirs.

Where is Elephant Hills?

How do you get there?

Transfers to the camp are included in the package price and are offered from many different locations including Phuket, Krabi and even Koh Samui.

The most popular tour is the Jungle Lake Safari, a 3-day 2-night soft adventure that gives you one night at the Elephant Hills Tented Camp and one at their floating Rainforest Tented Camp on Cheow Larn Lake. If you want to stay at the Rainforest Camp book early. The remote location is a big draw for honeymooners and there are only 20 tents at the floating camp, as opposed to 35 tents at Elephant Hills.

A Rainforest Nature Safari is tailored especially for seniors and the Family Jungle Safari for families. There is truly something for everyone. Visit the Elephant Hills website for more information on packages, their charitable projects and elephants in Thailand.

Looking for more exotic places to stay in Thailand? Check out my Sri panwa Phuket review, a Tubkaak Resort review and my review of Keemala Phuket.

Note: My stay was arranged by the the Tourism Authority of Thailand. All opinions and machete slicing are my own.

Boyne Canal boat tour and the Battle of the Boyne
Next Post:Hiking the Palm Springs Museum Trail