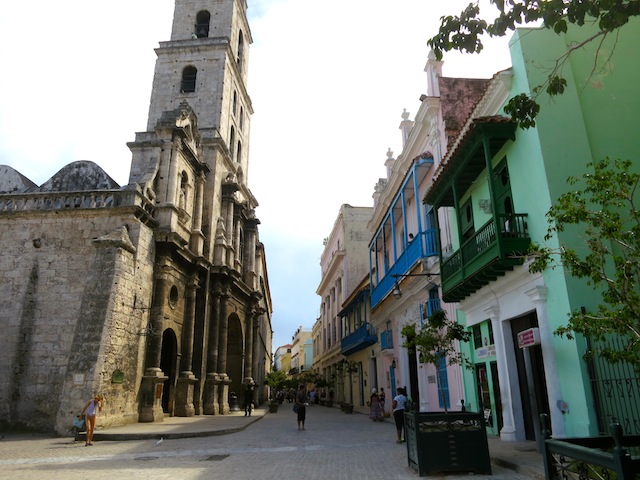 Don’t miss a visit to the historic El Floridita bar in Havana, the Cradle of the Daiquiri.

You’re not going to see all of Havana in one day. Even Che Guevara – who was actually from Argentina not Cuba – couldn’t have  seen all of Havana in a day. But no matter how action packed your visit, it’s worth making time to go to El Floridita, Cuba’s most famous bar.

“My mojito in La Bodeguita, my daiquiri in El Floridita,” goes the famous (but possibly not accurate) quote by writer Ernest Hemingway, who liked Cuba so much he stayed for 20 years.

What is accurate is that while living in Cuba Hemingway drank in both iconic Havana bars, La Bodeguita and El Floridita, and each is still going strong today.

Why Drink a Daiquiri in El Floridita, Havana?

Because El Floridita is known as the Cradle of the Daiquiri. This is another quote attributed to Ernest Hemingway, who helped put the humble daiquiri – as well as El Floridita – on the map.

The bartenders at the Floridita bar are legendary, well trained and skilled in the art of mixology, particularly when it comes to cocktails with fresh fruit and rum. They also excel in charm, making you feel as if you are indeed a valued guest, and not just one more eager tourist parading through the long narrow bar for a taste of Cuba’s colorful past.

While the cantineros (bartenders) can turn their hand to almost any drink, isn’t it a shame to be in the Cradle of the Daiquiri and not be cradling a daiquiri – even if it’s before lunch?

What’s in a daiquiri? Recipes vary but basically it’s rum, lime, sugar.
What’s in a frozen daiquiri? See above. Add ice. Blend.
What’s in an El Floridita daiquiri? Same as a regular daiquiri, along with crushed ice and five drops of Marasquin.
How did Ernest Hemingway like his daiquiri? No sugar. Double rum.

You’ll find people traipsing into la Floridita at all times of day, as it’s as much a tourist site as a watering hole, and you’re likely to find live music even in the morning.

Besides, Hemingway used to come to the Floridita about 10 a.m. armed with a newspaper, so if you’re here when the bar opens you’re not drinking too early, you’re researching literary history.

That said, La Floridita Havana is liveliest in the evening, especially as it has an upscale seafood restaurant in the back.

Why Hemingway Went to the Floridita Bar in Cuba

According to Hemingway, he wasn’t only here for the daiquiris or the food, but “to meet the tempestuous current of his countrymen who passed through the city.”

There is an alternate version of why Hemingway first stumbled into El Floridita: He had to go to the toilet.

Sadly, these days, while at trip to Floridita bar is a fun thing to do in Havana, you’re unlikely to find the tempestuousness of the past. On the plus side, it does have a toilet!

Ernest Hemingway is the best-known patron of El Floridita, but he isn’t the only A-list ghost sipping a mango daiquiri at the bar.

Many of Hemingway’s friends and acquaintances also visited this popular Havana cocktail bar: the Duke of Windsor, Jean-Paul Sartre, Gary Cooper and Tennessee Williams. (Not obviously, all together. But can you imagine the party if they did?)

Another literary powerhouse who patronized El Floridita is British writer Graham Greene, who wrote the classic novel Our Man in Havana in 1958.

Who else has been at El Floridita? Try Errol Flynn, Ava Gardner, Katharine Hepburn, Spencer Tracy and John Wayne. In fact, possibly we should be discussing who hasn’t been to El Floridita in Cuba.

El Floridita and Havana’s Wild Past

To understand the mystique of Floridita bar in Cuba, we need to look at Havana’s raucous past. During and after Prohibition, American gangsters moved into Cuba in droves. We’re talking notorious mafia leaders like Meyer Lansky and Lucky Luciano.

The jet setting party crowd soon followed, attracted by a tropical haven where drinks flowed freely and gambling and showgirls were all part of the day.

Havana in the 50s

The 50s were the real heydays of wild Havana. The dictator Batista got along swimmingly with the American mafia, who owned mobs (excuse the pun) of swanky hotels, casinos and nightclubs in Havana.

It wasn’t only La Floridita that was swinging. In those heady days you might have caught American stars such as Elizabeth Taylor or Frank Sinatra in the bar at the Hotel Nacional de Cuba or Liberace at the infamous Tropicana Nightclub.

Then Fidel Castro and the Revolution ended it all. Like that. Bam. The door was slammed. The jet setters jetted out. Except for Hemingway, of course, who stayed in Cuba until 1960.

El Floridita has seen it all come and go. In fact, the roots of El Floridita are older than America’s Prohibition itself. They go back to 1820 when the bar was a humble bodega called The Silver Pineapple (La Piña de Plata). Later it became La Florida, which evolved into El Floridita.

Quirky El Floridita Fact: In 1953 it was named by Esquire as one of the world’s 7 best bars.

The History of the Daiquiri

Was the daiquiri invented at El Floridita Havana? Probably not – though it’s a subject of hot debate – but it was perfected here.

The story leads back to fabled cantinero Constante Ribalaiguia, a master cocktail artist who bought the bar right around the time prohibition shuttered the doors on American nightlife and swung them open to free and easy Cuba.

Constante became known as the Father of Bartenders, training some of the best barmen the world has seen. He also worked for some 20 years perfecting the daiquiri, creating the blended version with shaved ice that keeps it slushy and cool.

Walk in past its bright pink exterior and you’ll find a jazz or salsa band playing at the front, patrons in holiday mode downing martini-shaped glasses full of rum, lime and ice, and posing for photos with the life-size bronze Hemingway in the corner.

Quirky Hemingway El Floridita fact: He didn’t sit at the bar, he stood. And occasionally fell down.

Back to my Cuba story

There is a lot to do in Havana. You can tour the Plaza de Armas and Havana Cathedral or go to El Templete where there is a sacred silk cotton tree that you should walk around three times.

Havana travel tips: Where else can you drink along with history?

1) The aforementioned La Bodeguita del Medio – Opened in 1942. Birthplace of the mojito (maybe). Located on Empedrado Street in Old Havana.

2) The Hotel Nacional de Cuba in the Vedado district – Opened in 1930. Winston Churchill was welcomed in 1946. So were the heads of the Cosa Nostra mafia. But not on the same day.

3) The Tropicana, legendary night club, cabaret and casino once patronized by celebrities and mobsters alike and in many ways, the heart of it all. Opened 1939.

4) Sloppy Joe’s Bar is yet another bar that used to attract late night jet setters, especially in the 40s and 50s. Conveniently, it’s right around the corner from the Iberstar Parque Central Hotel.

With a neo-colonial exterior, a central location in Old Havana and a chic modern interior, it’s hard not to love the 5-star Iberostar Parque Central, especially when you consider its sexy rooftop pool and glass-domed ceiling over the lobby bar.

If I did Cuba again, I wouldn’t whip through Havana. I’d combine a stay at somewhere like the Iberostar Parque Central with a Varadero beach vacation at one of Iberostar’s oceanside resorts such as the 5-star Iberostar Varadero or the 4-star Iberostar Tainos.

PS: I was hosted in Cuba by Iberostar. PPS: I would have loved it anyway. PPPS: They did not buy my daiquiri.

Cuba Luxury: Review of the adult only all inclusive Paradisus Princesa del Mar

Varadero and the Iberostar Varadero Resort

El Floridita: While the front of El Floridita is a cocktail bar, the back is an upscale restaurant known for its seafood.

The Cafe del Oriente Restaurant is one of the most elegant restaurants in town. Expect white tablecloths, chandeliers and waiters in black bow ties. Located just off Plaza de San Francisco de Asis.

Sloppy Joes is yet another bar that used to attract late night jet setters, especially in the 40s and 50s. Conveniently, it’s right around the corner from the Iberostar Parque Central Hotel.