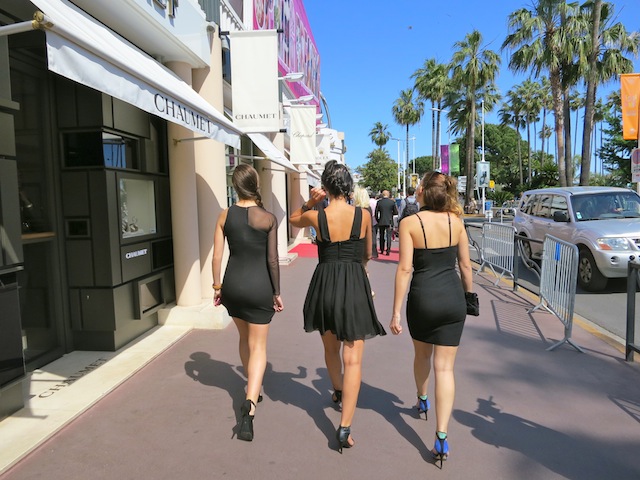 I’m sorry feet. I really am, but at the Cannes Film Festival, high heels change everything. They’re a painful fact of life.

UPDATE: This story was written before #HeelGate in Cannes, a controversy also known as #FlatGate, which erupted when a number of women were turned away from a film (ironically named Carol) premier for wearing flat shoes.

For someone who can barely stumble around in heel of anything over an inch and a half, this seems ridiculous. We should make men wear ’em. I’ll put on a tux.

High heels are especially important when you’re walking the red carpet, or, like me, have no film expertise, have not written a screenplay or produced anything other than a musical (which I also wrote) in Grade 6, and have nothing, really, to show for yourself except a blog and a willingness to kill yourself tottering around on spike heels.

Now come on, feet. At least I’m not making you walk around in the four inch Louboutins! You should be grateful.

Over a solitary meal, an endive salad with walnuts and blue cheese (yum) at an outdoor table at New York New York, just across from the Palais, which is the epi-centre of the Cannes Film Festival universe, I enjoyed my first celebrity sighting of the afternoon (spoiler alert: it was also my last), one of the cast members of Timbuktu, a movie here garnering good reviews and some surprising Palme d’Or buzz.

Eating a salad at Cannes – get your breaking news here first

Sitting in the sunshine, and glad to sit down since I was wearing heels (rust suede, and very soft so I won’t get blisters except I eventually did) I also experienced that unpleasant sensation that because you are a woman alone, people think you are not actually here to eat a salad, but to get picked up. Why is that? If a man was sitting here in high heels no one would think that. Or then again … well, you know what I mean.

Anyway, after my exciting salad and celebrity sighting, I was crossing the street over to the Palais to try and get into Party Girl (spoiler alert: I should have lined up earlier) when a German woman stopped me.

“Excuse me, we’re doing a documentary for a German magazine on fashionable women at Cannes, would you mind posing for it?”

Yes! The high heels and sore arches have paid off! This is what happens when you wear heels during the Cannes Film Festival! Finally I fit in!

“Of course,” I said graciously. Making the most of my moment in the glitzy-Cannes-sun, I started doing a few diva moves, hand at my head, hands on my hips, smizing, come hither-eye-ing, until I couldn’t think of anymore poses I’d seen on America’s Top Model, at least not without an elephant, a trapeze or a barrel of mud as an accessory.

The plot always thickens at the Cannes Film Festival

“Great,” said the woman. “Now can you answer a few short questions? How old are you?”

“It’s about OLD people?” Yes, my friend, it was an article about fashionable OLD people at Cannes. The champagne bubbles stopped bursting in my head, though I did start to laugh.

Oh, that makes me feel SO MUCH BETTER.

After I couldn’t get into Party Girl, I took a seat in my ‘office,’ a set of low steps outside the press room where I can get wifi, and started looking at my iPhone, even though I probably should have been sightseeing and enjoying some of the many things to do in Cannes.

I wasn’t too upset about not getting into the movie (not compared to being in an article about old people in Cannes) because I’ve already gotten into 3 movies (and if you don’t want to know what happens in them skip the next three paragraphs).

10 second review of That Lovely Girl by Israeli director Keren Yedaya. Painful. Vomit. Incest. Emotional abuse. Cutting. Blood. Sleeping with father. Upset when he two times. Sleep with random group of men on beach. Redemption. A movie you don’t forget. No matter how much you’d like to.

10 second review of Amour Fou, by German director Jessica Hausner. Beautifully composed. Each shot like a Hans Holbein painting. German Romantic poetry. Based on true story. Claustrophobic. Slow. Bizarre premise, that you would rather die with someone than live with them. No! Don’t go! Don’t do it. Explosion. Oh, oh!

10 second review of The Blue Room by French director Mathieu Amalric. Sophisticated. Grey (even though it’s called ‘blue’). Lots of nudity and twisting around on the sheets, ending up in graceful yet explicit poses. What’s going on? Suspense. Drama. Oh, bloody hell.

Back to my ‘Cannes Film Festival, high heels change everything’ day

As I was sitting on the steps, a Brazilian man I’d met on the same steps the day before, the one who’d told me I have a spiritual face, sat down and told me how he’d got an invitation to one of the premieres at the last minute, but it was the one day he hadn’t brought his bow tie and so he couldn’t get in, because if you’re a man you can’t walk up the red carpet without one. And how a producer told him that you could make a professional movie for $3,000. (Atom Egoyan, look out!)

“After I met you I told my friend that you had the lips of an angel,” he said, switching topics.

How old are angels, I wondered?

Whoa, didn’t see that one coming. “I don’t think my husband would appreciate it,” I told him.

This is when the Brazilian man told me I should live. Live! “There is a physical connection between us,” he said. (And this is really rude of me to tell you all this on my blog, because I’m sure he didn’t realize what he said would then be published, so be careful, people, about what you say to strangers, high heeled or not.)

And then he said what?

“In a few years you’ll be …” He stopped when he saw my eyes narrow.

If he says one word about me being old, one of these rust-coloured high heels is going to start flying, I was thinking.

“Um, in a few years you’ll regret not taking a chance,” he said. “How long have you been married?”