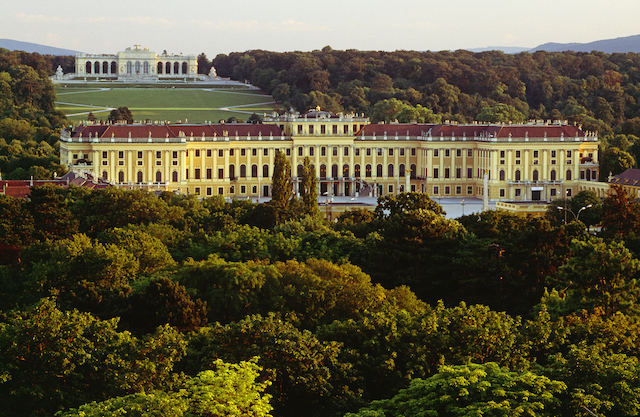 Some might say the Habsburg Empress Maria Theresa was a battle axe. Then again, she abolished serfdom, ruled Austria, Hungary and Bohemia for 40 years (1740 to 1780) and fought fiercely to keep her crown, so let’s cut her some slack.

Now let’s get back to Wandering Carol tours Vienna and the 9 titillating Schonbrunn Palace facts below.

In addition to ruling the Habsburg Empire with nerves of steel, Maria Theresa had a soft spot. That soft spot was Schonbrunn Palace, or Schloss Schönbrunn.

In 1743 she undertook the task of completing the unfinished Schonbrunn Palace in Vienna. And once it was finished, her next pet project was to renovate Schonbrunn Palace. Over and over again.

This took forever and cost piles of money but Maria Theresa obviously did a bang up job because today Schonbrunn Palace is a UNESCO World Cultural Heritage site and the most visited attraction in Austria.

And if everyone else who tours Vienna is going to the palace, so should you. Here are some titillating Schonbrunn Palace facts to show you why. (Well, maybe they’re not all that titillating but I did my best.)

The Room of Millions, dripping tip to toe in priceless Indian and Persian miniatures, is one of the finest examples of the Rococo style known to mankind.

Did you know? Schonbrunn Zoo is the oldest zoo in Europe.

The Blue Chinese Salon is where, with one sad flourish, Emperor Charles I signed his abdication in 1918, ending 640 years of Habsburg rule in Austria and sounding the death knell of the monarchy.

On a happier note, you can follow the footsteps, literally, of the Imperial family by strolling (or lost) in the Maze at Schonbrunn, a geometric maze that dates back to 1698 and was restored to its former hedge-y glory in 1908.

You can also watch others get lost in the Maze at Schonbrunn by standing on a special lookout platform created just for this reason.

In the Great Gallery, under the sumptuous Italian ceiling frescos, John F. Kennedy had a legendary meeting with the Russian head of state Nikita Khrushchev. (Admittedly it would be more titillating if Kennedy had met Marilyn Monroe here but I can’t just make things up. Still, this was the Cold War. This was EPIC.)

With 45,000 panes of glass, the Palm House in Schonbrunn’s Palace Park is the largest palm house on the European continent. (Don’t know what a palm house is? Don’t worry. I didn’t either. It’s a greenhouse.)

Did you know? Maria Theresa was the mother of Marie Antoinette

You can visit the Marie Antoinette Room, which is actually a dining room. It was named after Marie Antoinette because of a tapestry of her and her children that once hung here. It was a gift from Napoleon III.

And if anyone ever wants to know what to get me for my birthday, a 19th century tapestry of Marie Antoinette will do nicely.

You can trace the tracks of the Empress Sisi, the Lady Di of the 19th century, though her carriages.

If you have Sisimania and are fascinated by the life of this tragic beautiful empress (who did not rule with an iron fist and has never been called a battle axe), you can trace her life through the carriages in the Imperial Coach Collection, which, in my humble opinion, is a unique way to explore someone’s life. You will see:

Last of the Titillating Schonbrunn Palace Facts: #9 – The Hall of Mirrors

In the Hall of Mirrors, six-year old Mozart gave a concert for Empress Maria Theresa and her family. It was the beginning of his meteoric rise and I’m sure it was titillating, especially for him.

Where is Schonbrunn Palace? The palace and its extensive gardens are in the west of Vienna in the suburb of Hietzing.

How to get to Schonbrunn Palace:

How to tour Schonbrunn Palace: You have two choices of Schonbrunn tours, the Imperial Tour and the more comprehensive Grand Tour.

The Imperial Tour covers 22 rooms including the private apartments of Franz Joseph and Sisi. Tours are 30 to 40 minutes and cost €12,90 adult,  €9,50 children.

The Grand Tour shows you more of the 18th-century interiors of the era of Maria Theresa. The hour-long tour covers 40 rooms and costs €15,90 adult, €10,50 children.

Read more about Europe and top places to visit.