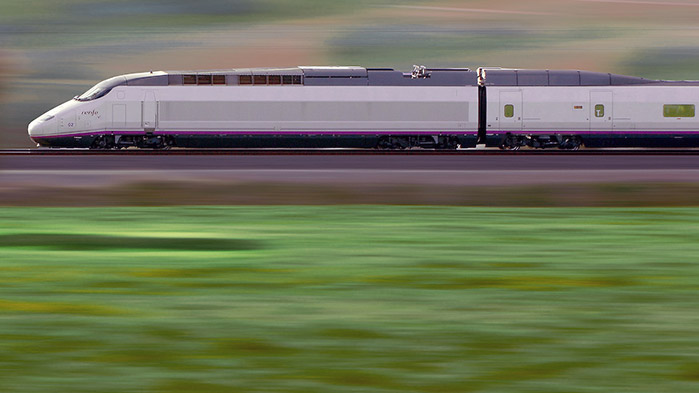 Here’s everything you need to know about catching the Paris to Barcelona train from Gare de Lyon. Read on for my near-disastrous experience or scroll down to the bottom for all the European train information you need.

Paris to Barcelona by Train

I travel. A lot. Which is why I didn’t think twice about catching a Paris to Barcelona train from Gare de Lyon. Here’s what I learned: Anything can be confusing if you’re me.

Catching a train at Gare de Lyon in Paris might be confusing for you, too. So. If you want to learn more, or just gloat because you’re more savvy than I am, read on.

Staying in Paris? Check out my Paris travel guide

My Paris to Barcelona adventure began at Le Train Bleu, a historic restaurant in the Gare de Lyon. In my opinion it’s the best train station restaurant in the world. The experience was doubly delicious because by coincidence, my friend from Toronto, the writer Patricia Sands and her husband were also in Paris.

Bizarrely, they had made reservations at Le Train Bleu on the same day at almost exactly the same time. I found out on Instagram.

I’m still shaking my head about that, and I swear it’s true. If you don’t believe me then go over to Part 1 of this 2-part Paris to Barcelona Gare Lyon blog post, about Le Train Bleu, the best train station restaurant in the world  – because if it’s in writing it’s clearly true.

Le Train Bleu is so sumptuous that I lingered until I was nudged out by Patricia’s lovely husband, who possibly has a better concept of time than I do.

I wasn’t worried, however, because I’d factored in time to 1) visit the Grand Voyageur 1st Class Lounge before departing, 2) buy a baguette with mozzarella and tomato for the journey, even though I’d just eaten and 3) had wisely validated my Four Country Select Rail Pass from Rail Europe before lunch.

Read on to find out all you need to know about taking the train from Paris to Barcelona and – most importantly – what NOT TO DO. Because I did it.

Finding Your Paris to Barcelona Train at Gare de Lyon

Being a diligent sort of traveller I decided to find my platform before going to the Grand Voyageur Lounge. Easy, peasy, I thought, looking at the neat row of train platforms in front of me. The problem was that THE PARIS TO BARCELONA TRAIN WASN’T THERE.

Flapping around in confusion, I asked a young Frenchman where to go. Here’s what I have to say about that: Never trust a stranger who tells you the train from Paris to Barcelona is downstairs, because he doesn’t have a clue. That’s the metro down there.

(Eating crow note: I have since learned there is a lower concourse called Hall 3, by which all tracks can be accessed, but I didn’t see it.)

Where Do You Catch the Paris to Barcelona Train?

A second stranger told me my Paris to Barcelona TGV train was on Track 7.

Now I was worried. After wasting so much time following the wayward directions of others, I realized I would not only have to give up the Grand Voyageur Lounge, I might not even get a baguette.

Calm down, I told myself. Take a breath. Walk to the lit up board calmly and read it carefully like you should have done to begin with.

I joined the crowd clustered in front of the information board and saw that the 9715 high speed Paris to Barcelona train left Gare de Lyon from Track 29. Don’t worry, I told myself. You still have 7 whole minutes.

If only there was a Track 29.  It was a total Harry Potter moment because Platform 29 simply did not exist. It was like looking for the Hogwarts Express.

“There’s another hall,” a woman finally told me as I stopped her with a panicked stream-of-consciousness rant. “You need to go up along the left side of the tracks and you’ll find it.”

I speed walked up there as best I could, but my suitcases were acting like two fat pigs who thought they were truffle hunting and wanted to sniff everything in sight.

Come on, you stupid bags, I muttered, hoping I didn’t trip over them (which happened in Toronto when I was trying to catch an airport bus – and thank you, kind bus driver, for putting a bandaid on my knee).

Then, as I scurried along the side of the tracks to the end of the station and looked left, a whole new world of train platforms opened up to me. The wonderful Hallway 2. Home to the mystical Platform 29. Where a train was waiting. Now all I had to do was find Car 11.

I asked the conductor for Car 11 on the Paris to Barcelona train. “This isn’t the right train,” he said. “Yours is the next one further down the platform.” He looked at his watch.

Two Trains on the Same Track

“Arggggh!” Two trains on the same track? Who makes this stuff up?

When I saw the man in front of me start to run, I broke into a lumbering trot, puffing heavily and thinking, why are my bags so heavy? Why did I buy that sweater at Morgans? And the other sweater? And those tops? And that Balenciaga purse? Why do they weigh a million tons?

At the far end (the very far end) of the second train on Track 29 was Car 11. With three minutes to spare, fuelled by an adrenalin-filled burst of superhuman strength, I hoisted my bags onto the train, up the stairs of the double decker car and found my seat on the train.

My glorious seat with a view.

It was so wonderful to be on the high speed Paris to Barcelona train, and not be frantically wandering the halls of Gare de Lyon, that I blissfully looked out the window while my heartbeat slowed down.

The train whipped past two-toned green hills and yellow canola fields and I thought France must be the most beautiful country in the world, almost as beautiful as the 41 painted scenes of it on the walls of Le Train Bleu.

Speed of a TGV

The only downside was that a TGV is fast. Normally, on an international rail trip, that’s a good thing, but at speeds of 300 km per hour (186 mph) let me just say it is not easy to take photos.

After managing to capture a few not-too-blurry shots I asked the American man behind me to take my picture so I could document the proud happy moment of actually catching the train.

Another Paris to Barcelona Train Coincidence

“Are you going to Barcelona?” I asked the man as the TGV rocketed through the French countryside towards Spain.

“Me, too, with a stopover in Girona. Where were you before Paris?”

Then I thought it was no coincidence that travellers of all types are drawn to the romance of train travel with its monumental stations and comfy seats with a view, and that once you’ve found your platform, traveling through Europe by train is the best way to travel of all.

Travel Guide for a Europe Rail Trip from Paris

Where to Get Train Tickets in Europe

At the Train Station

You can buy tickets at the train station, but it’s more expensive if you do it at the last minute. And give yourself time. There can be long lineups.

I use Deutsche Bahn a lot. It’s a German train website but they have timetable information for other places as well as well as booking options.

Rail Europe offers tickets and various passes. If you’re travelling around a lot it can be a good deal. On their website you can learn about different rail passes (eurorail/eurail), single train tickets, find fares, routes, schedules and make a booking.

Don’t forget to validate your pass before you board your train.

If you’re travelling with a rail pass, you NEED to validate your pass before you use it for the first time. At Gare de Lyon you do this at the ticket office, also known as the Billets SNCF Grandes Lignes in a hallway called the Galerie des Fresques. It’s on the left side of the station (if you’re facing the platforms in Hallway 1) parallel to Rue Chalon.

At the ticket office you have to take a number at the machine. And then you panic because the line is so long. And then, if you’re lucky, you talk to the man who is standing at the ticket machine helping people and he will miraculously validate your European rail pass for you.

You can validate your rail pass up to 6 months before you travel.

Address: Gare Lyon Station is at 20 boulevard Diderot in the southeast of Paris.

Traveling 1st class? If you have a first class train ticket you are entitled to free lounge access at the Gare de Lyon’s Grand Voyageur Lounge on Level 1 of the station.

If you’re traveling by TGV or high speed train on any kind of Europe Rail Pass – here’s what you need to know:

Do you need a reservation for the TGV if you have a rail pass?
Yes, yes and yes. I cannot stress this enough: Buy your ticket reservation early. There are only a certain amount of TGV tickets allotted to rail pass holders, and you need to reserve your seat months (yes, months!) in advance. I tried to reserve online more than a month prior to traveling from Paris to Barcelona on the Rail Europe website and none was available.

What to do if you can’t get a reservation for the TGV or other train online before your trip?

Be flexible: You may have to take another route. For example, another high speed Paris to Barcelona train route from Gare de Lyon involves a train change in Nimes.

What you need to know about taking a TGV train from Paris to Barcelona:

Technically it’s not a TGV train that travels the Paris to Barcelona route: It’s a High Speed France-Spain Train, I refer to it as a TGV because it’s shorter (and because everyone else does). And Rail Europe calls it the Renfe-SNCF high-speed train. So pretty much you can call it whatever you want.

Where do you catch the high speed Paris to Barcelona train? Gare de Lyon.

How much does a reservation on the TGV from Paris to Barcelona cost?
Train reservations for high speed trains aren’t cheap but they are necessary. My 1st class train reservation for the France-Spain High Speed train Paris to Barcelona cost me $49 on top of my Eurail Select Pass, plus I needed to pay a Rail Europe booking fee of $18 plus a UPS shipping fee of $18 for a total of $85. (This is Canadian currency so it would be more like $70USD.)

How long is the train from Paris to Barcelona? About 6.5 hours on the direct France-Spain High Speed Train.

Planning a trip? Here are more destinations in Europe to visit.

Disclaimer: My pass was subsidized by Rail Europe (thanks, lovely train people.)