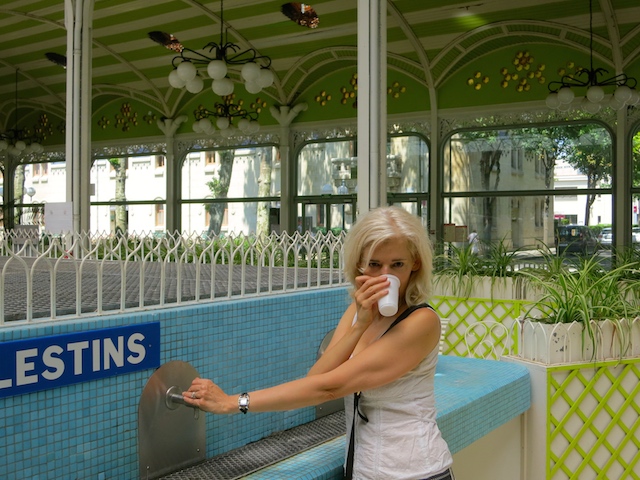 “Bonjour Monsieur et Madame,” said the elderly Frenchwoman in a singsong voice as she sat on a bench outside the drinking hall in the Parc des Sources. The park is the green heart of Vichy, France, a historic French spa town three hours south of Paris.

“Bonjour,” my husband, Mark, and I replied, bobbing our heads like idiots.

This daily greeting was an important ritual for me and Mark during our weeklong spa stay in Vichy, because the stout old woman who planted herself on the bench everyday was only person who ever spoke to us. You couldn’t exactly call Mark and me social successes in Vichy, an aristocratic French spa town once favoured by Napoleon III (and the Nazis), though we tried our best to fit in.

Note: It’s not my intention to minimize the dark spot on Vichy’s history. My Vichy travel guide post talks more about Vichy’s history as well as its top sights.

But who needs friends, right? If you do want to travel to Vichy, France, and are interested in the wonderful culture of the old-fashioned French spa, what you need are tips about the Vichy springs, the raison d’être for this gracious, slightly-faded town in the Auvergne region of France. This is why, in addition to the sorry tale of my social humiliation, this Vichy travel blog post will provide you with plenty of spa water info.

Vichy spa fact: Yes, the Vichy water you buy at the 7-11 does come from Vichy, France.

All spa roads lead to the Hall des Sources

Let me say right off that when it comes to my social disgrace all fingers of blame point directly to the Hall des Sources, an airy building of glass and wrought iron built in 1902. There is no denying that the Hall des Sources, or the Hall of Springs, is a looker, and when you’re inside its rather like being under a lime-green-and-white-striped umbrella of enormous proportions, but I’m not sure I’ll ever forgive it for being the ‘source’ of my downfall.

Coolest piece of French spa trivia ever: Coco Channel used to hand out medicinal water at the Halls des Sources in Vichy.

The Parc des Sources in Vichy

The Hall des Sources is located in the Parc des Sources, a spa park laid out by Napoleon III in 1812 (not that he was out there planting trees, he had people for that). If you travel to Vichy you’ll soon learn the park is the centre of the spa social world. There are historic cafes, covered iron walkways, chestnut and plane trees and even an Art Nouveau bandstand.

French spa culture: the medicinal water in the Halls des Source of Vichy

Out of 12 Vichy springs altogether, 6 are available at the Halls des Source for drinking (the other 6 have been closed or lost), and it’s here where the social status lines of Vichy spa-goers are firmly drawn. On one hand you have the Serious Spa Goer who comes to Vichy to cure. On the other hand is the dreaded category of fly-by-night water drinkers, the Spa Tourist.

How to recognize a Serious Spa Goer in Vichy

How to recognize a Spa Tourist in Vichy

I am not a Spa Tourist. I’m not! I’m not! I’ve spa-ed in almost every European country except Belgium. Okay, and Spain. And maybe Romania. And erm, Bulgaria. The point is I’m a Serious Spa Goer, at least in my head, and I was determined to fit in with the cool crowd of spa curists who drink from the most mineral-laden Vichy springs, depending on what health concerns they have.

All the Vichy springs contain bicarbonate of sodium. What’s difference is the temperature of the water and the salt quantity. There is alkaline salts, calcium and magnesium carbonates. Some would say it stinks with the smell of sulfur – but everyone’s entitled to their opinion.

The Hall des Sources is divided into two parts by a low barricade, so if you’re a lowly Spa Tourist you can only look longingly at the VIP side of the drinking hall, sipping your boring old Celestins or Lucas spring water that isn’t even naturally hot and is lower in minerals, while the Serious Spa Goers mill around their side sipping their doctor-ordered important spa water in exact amounts at specified times of the day.

I know, right? What could they be thinking? Seriously, though, hear me out. Unless you’re doing some kind of government funded spa visit as a French citizen (and yes, the French government does fund spa going, which is one of the reasons I wish I were French – the other being baguettes), or have a spa doctor’s prescription, you can’t partake in all the curative spa therapies you might want to. And you certainly can’t drink from any old Vichy hot spring you choose.

French spa reality: the haves and have nots of Vichy Spa

Mark and I had no idea of this snobbish division of spa visitors to Vichy and so, on our first afternoon here we innocently followed two Serious Spa Goers into their half of the drinking hall as they went through the door.

Immediately I was in Vichy springs heaven, sampling all the springs with their different mineral compositions and curing all kinds of ailments I didn’t know I had, such as abnormal biliary secretions. This is because I am a badass when it comes to spas and will drink any type of non-poisonous spa water you can throw at me. (But if you’re going to throw it please aim for my mouth.)

The next day we skipped happily (okay, Mark wasn’t skipping) over to the Hall des Sources only to learn that without a special key card you can’t enter the serious side of the Vichy springs drinking hall, the side for professional drinkers.

Luckily, French spa rules are no match for two people with very long arms, so Mark and I learned to enter the public side where the tourists go and simply reach around the barrier to fill our cups with the heavy duty thermal springs such as Hôpital, Chomel or Grande Grille. I told you I was a badass!

PS: Mark would have been totally fine with Celestins water (or beer) but then again, he’s not a spa social climber like I am. He’s more of an enabler, his predominant role was to block me from sight while I snuck medicinal spa water, or to fill up my cup while I distracted the crowd by say, whistling loudly.

One afternoon we heard music coming from the Hall des Sources. There was a tea dance (though technically, it should be called a mineral-water dance) going on. Obviously this was an exciting part of French spa culture I wasn’t aware of.

Chairs were set up on the public side of the drinking hall, a musician was singing and the Serious Spa Goers were dancing. It seemed that any spa curist who was anyone was there.  This is our chance, I thought. Our chance to fit in and shine!

“Let’s dance,” I said to Mark. We knew how to dance. Before we got married we’d taken an entire 45-minute free demonstration lesson at the Arthur Murray School of Dance in Toronto so we could make it through the first dance at our wedding reception.

By some amazing stroke of joy Mark agreed (obviously he’d been drinking too much spa water and his inhibitions were loose). We stood up and I gracefully began my one, two, three, four routine, but for some unidentified reason Mark launched into a kind of interpretive two-step dance that only went forwards and backwards.

I had no idea what he was doing so I gamely continued with my one, two, three, fours while he rollicked on with his stacatto one two one twos. We were like two bumper cars adrift in a sea of stormy spa water, endlessly crashing, rebounding and crashing again.

It was social suicide. The spa-goers of Vichy are a fox-trotting waltz-loving crowd. There was only one thing to do. Laugh. And then I laughed harder. I almost collapsed I was laughing so hard, and tears (of mineral-laden spa water, no doubt) were flowing from my eyes.

“Shh! You’re embarrassing me,” Mark said, trying to hoist me up while I was busy collapsing into spasms.

Because it wasn’t funny It was disaster. My lofty spa ambitions were crushed. We’d had so much going against us to start with: We weren’t French, could barely bumble through the language and didn’t have personal spa doctors or electronic key cards for the Halls de Sources or even our own collapsable cups. And now we’d never be able to redeem ourselves.

And then it got worse. Vichy spa demise part #2

Deciding to drink my troubles away, I sidled around Mark, reached around the barrier and filled my plastic cup with some comforting Grande Grille spring water. And I got caught.

A Frenchman hustled up to me and started shouting non! non! non! non! and rubbing his stomach, miming that without a doctor’s prescription I was about to a) either have a baby immediately or b) become dramatically and violently ill.

In the end I was neither. Years of overindulging in mineral water has built up my tolerance. IMPORTANT NOTE: Please don’t do what I did, because it could harm you. I’m an addict and there’s no hope for me, but stick to Celestins spring water and save yourself.

Mineral water addict or not, I’m still not over the embarrassment of bombing so spectacularly at the Vichy spa tea dance and neither, I’d say, is the elderly Frenchwoman who used to greet us outside the Halls des Source, because she never said “Bonjour Monsieur et Madame” with quite the same warmth again.

Travel tips for France spas and treatments in Vichy, France

Don’t let fear of making a fool of yourself stop you from spa-ing in Vichy. It’s a wonderful place. If you want to do spa treatments in Vichy without seeing a doctor you can do non-medicinal treatments at the deluxe Vichy Thermal Spa les Célestins.

Medical spa treatments in Vichy: If you want to do medicinal treatments and drink Vichy spring water in a healthy controlled environment, try the tourist office, officially known as the Office de Tourisme et de Thermalisme, at 19 Rue du Parc. Ask for a list of spa doctors. Alternatively, book a doctor’s appointment at the Vichy Thermal Spa les Celestins. But take note, you usually need a good chunk of time to do a proper cure at French spas.