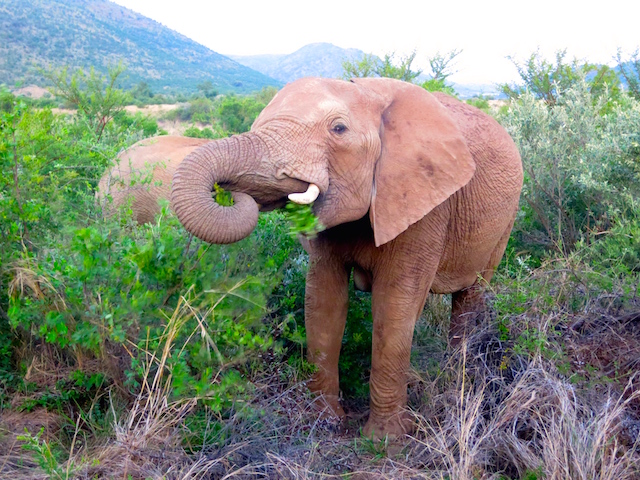 “What’s really cool on a safari is when you see a lion or leopard killing a zebra,” a man from Johannesburg told me as I waited outside my hotel, the Palace of the Lost City, in Sun City, South Africa, for my sunset excursion to find the Big 5 safari animals: the lion, African elephant, Cape buffalo, rhinoceros and leopard. 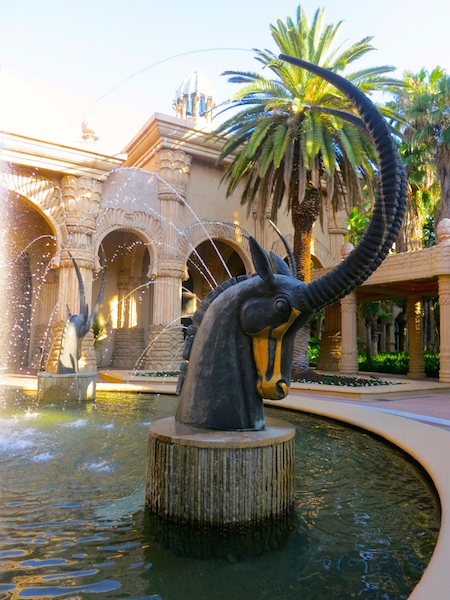 “No it’s not.” I looked at the man in annoyance.

Watching Big 5 safari animals tear each other’s throats out might be okay on a National Geographic documentary, when a bowl of popcorn and a TV screen sit between you and the gore, but out in the wild I wanted to see happy animals, Big 5 or not: zebras grazing peacefully, giraffe heads bobbing above treetops, baby elephants clinging to their mother’s tails – a happy game reserve where all the animals get along and meet at the watering hole at dusk to talk about their day.

“Well,” the man agreed. “When the lion leaps at the zebra and rips into its neck and you see the blood and watch it die, that’s not the good part. It’s the chase that’s exciting.”

But isn’t any animal safari exciting, I wondered, as an open air Range Rover with a Mankwe Gametrackers logo on the side swung up to the hotel? Is the chase part essential? Not for me, I didn’t think. Not unless I was more bloodthirsty than I realized.

Our guide introduced himself as Gift, and I hopped into the Range Rover along with Winsor, an Australian journalist I was travelling with. Within minutes we were at the Pilanesberg National Park gates. Happily, for those who hate long excursions, Sun City backs right onto Pilanesberg, where all the Big Five safari animals can be found.

History of the Big 5 safari animals

The term Big 5, or Big Five, was originally used by big game hunters to represent the most dangerous and difficult animals in Africa to hunt down on foot. Today it’s more of a safari marketing tool. And even though baby zebras might be cuter, it’s still fun to try to cross them off your list.

Bring on the Big 4

“Actually,” I told Gift. “We  only need a Big 4.” We’d already seen lions on our aborted-by-too-much-wind hot air balloon safari to Pilanesberg the morning before. “What I really want to see is a leopard,” I said.

Gift shook his head. “Leopards can be hard to find.”

That was disappointing. I am a leopard-loving kind of girl. Dazzling, sexy (the leopard, not me), both edgy and elegant, leopards are the supermodels of the natural world, their white golden fur and distinctive black marks launching a thousand fashion campaigns. (And thankfully, these days it’s all FAKE!)

Leopards might be out of our reach, but within five minutes of being in Pilanesberg, a 55,ooo hectare game reserve that sits in the crater of an ancient volcano, we saw something remarkable.

“A black rhinoceros,” Gift said, swinging the Range Rover to the side of the road.

I looked out into the distance and saw a splotch. I put on my glasses. Now it was a splotch with a horn. But what a splotch. Volatile, grouchy and elusive, the black rhino is one of South Africa’s most endangered animals, so even a glimpse is a total animal safari score.

“There are African elephants moving up there.” Gift pointed towards a ridge.

I squinted. I supposed those greyish-looking bunches of twigs and brush on the horizon could be elephants, though it was awfully hard to tell. Still, it counts as a sighting, I decided. Scratch African-elephants-that-I-didn’t-really-see off the list.

Now if we’re going to play animal favourites, and I see no reason not to, I didn’t really care about seeing the Cape buffalo. No offence to the buffalo, but I keep mixing them up with gnus, which are wildebeests, which are everywhere in the park. So really, I decided, if we eliminate the Cape buffalo, only one more Big 5 safari animal to go!

And that would be the leopard.

“Leopards are really rare here,” Gift reminded me when I mentioned my animal safari shopping list.

“Oh, well.” The truth is, it was just fun to be cruising around Pilanesberg, the fourth largest park in South Africa, so gloriously wild yet so surreally located next to Sun City, a fun-sun destination complete with luxury hotels and casinos.

“Hippos,” Gift gestured towards the edge of the Mankwe Dam. At least these animals I could see, though not in much detail. I was beginning to think my entire safari was going to be a series of small black dots.

“The only thing that kills more humans than hippos in Africa are mosquitos,” Gift said, making me grateful Pilanesberg is malaria free.

As the sun started to sink lower, the colours of the soil and the acacia trees seemed to grow richer, as if the sun was pouring all its dying energy into one last show.

As if on cue, animals started coming out of nowhere: zebras, impalas, springboks, then a family of elephants by the side of the road, a baby peeking out from under its mother’s stomach.

The elephants were so close I could see that their ears really are shaped like Africa.

“Look,” Gift said. “That baby elephant can’t make it through the bush. Her little sister is helping her.”

I could have stayed there for hours but eventually we had to move on. At a restaurant/rest stop called the Zebra Crossing I saw a giraffe at the salt lick, Winsor and I had a spot of wine from our picnic basket then Gift got a call.

“A leopard has been spotted! Let’s go.”

A bushfire of adrenalin ran through me. This was the prize of the Big 5. Master stalkers and nocturnal, leopards are solitary, elusive and have an unbeatable mystique. “Follow that leopard!” I shouted.

Raising up dusty red soil, we careened over bumps, the arid South African air whipping my hair and pushing the scent of wild grasses up my nostrils.

I started to see what the man in Johannesburg had been talking about – the thrill of the chase. Only instead watching a kill, we were the predators, our trophy a once-in-a-lifetime sighting and maybe a photograph or two.

The prize of the Big 5 safari animals

One turn, another and another. We saw a safari truck coming our way. The driver motioned for us to turn around. We U-turned, stopped and there it was. A leopard padding around in the bush, just wandering and slinking and poking its nose into bushes – doing general leopard-y things they do when not ripping out zebras’ necks.

A couple of other safari jeeps were already there. Everyone was silent as the leopard ignored us.

We watched and waited as the sun slunk down behind the hills of Pilanesberg, turning the ancient volcanic ridges a deep burgundy black, until our chase was truly over and the leopard had disappeared into the bush.

The thrill of the chase is one thing, I realized, the absolute stillness when you stop is a thousand times better – a pure perfect moment when you find yourself exactly where you want to be.

Pilanesberg is one of the most accessible of South Africa’s National Parks, about 2 hours from Johannesburg.

Animal Safaris: Mankwe Gametrackers has a number of safari excursions that can be booked from Sun City.

The gorgeous Palace of the Lost City is Sun City’s flagship hotel, a Leading Hotel of the World.