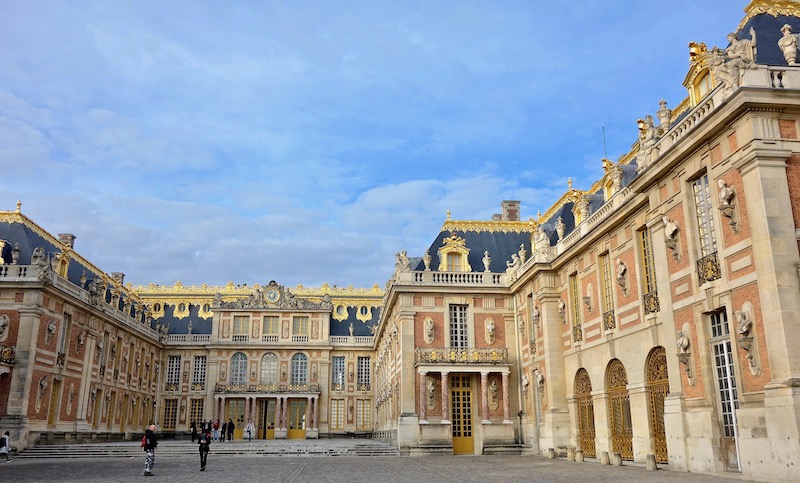 The Palace of Versailles is one of the most opulent attractions in France, and is an unforgettable day trip from Paris. A French Baroque palace with arched windows, gleaming mirrors and gold, it was a royal residence unparalleled in Europe.

Also known as the Château de Versailles, or Versailles Castle, because a place this bejewelled and glorious can’t have too many names, Versailles has 700 rooms and more than 2,000 windows. So how do you tackle something this legendary? What’s the best way to tour Versailles?

The Versailles tips below will make a Paris to Versailles day trip easy (hopefully). I’ll also tell you what not to do, because I did it and it nearly ruined my tour.

The Best Way to Tour Versailles

You can do a Versailles day tour from Paris, with a hotel pickup. This is the probably the easiest way.

But. If you organize your day trip yourself, you’ll have more freedom and flexibility. The best way to do Versailles on your own is to combine it with a 90-minute palace tour that you book in advance.

(An even better way is to stay overnight, but these tips for visiting Versailles focus on a doing day trip.)

The key things to know when organizing a Paris to Versailles day trip on your own:

Getting from Paris to Versailles

First you need to get there. Versailles is about an hour away by public transportation from Paris even though it’s only 17 km in distance. There are several ways of getting there. I prefer the train.

Taking the Train from Paris to Versailles

Visiting Versailles Tip: Buy a return ticket to start with, otherwise you’ll have to wait in another long lineup to get a ticket back. The Versailles Rive Gauche Station is the closest station to the palace. Follow the crowds heading towards the palace.

The other stations, Versailles Chantiers and Versailles Rive Droite, are farther away.

Paris to Versailles by Bus

There are several options to go to Versailles by bus. Here’s a couple:

There are several different types of tickets for Versailles, and it’s a good idea to buy it in advance.

Taking a guided tour of the Kings Apartments:

None of the entrance tickets above includes the guided tour of the Kings Apartments. The tour is about 90 minutes and costs an additional €10.

It includes sights such as Louis XVI’s lock cabinet (he was obsessed with locks), his library, Louis XV’s dining room and possibly the most famous piece of furniture in the world, Louis XV’s roll top desk.

English language tours are offered every day except Mondays. You can book online and check tour times on the Chateau Versailles website.

Where to buy tickets for Versailles
You can buy your Versailles entrance ticket online on the official Chateau Versailles website. You can also buy it at the palace but be forewarned, this means an extra lineup.

To buy a ticket onsite go to any Palace ticket desk located around the Main Courtyard of Versailles.

What Not to Do at Versailles

But don’t worry. If you’re doing a Versailles day trip by train, it’s unlikely you’d go in this way anyway, as the Queen’s Gate is on the right (east) edge of the grounds, and you will most likely arrive from the south. Nonetheless, it’s what I did and I nearly missed my guided tour of the King’s Apartments because of it.

If you’re staying at the Waldorf Astoria Versailles Trianon Hotel like I was (and it’s a lovely hotel), its an easy mistake to make as it’s the nearest entrance to the grounds.

It was a lovely walk and I had no idea anything was wrong. I passed Neptune’s Fountain in the gardens, with just enough time to make my 9:30 a.m. guided tour. The gardens were deserted – a rare peaceful moment at the Château de Versailles. As I walked I imagined Marie Antoinette on the same path, escaping the stifling confines of the court, or Madame du Pompadour, the elegant mistress of Louis XV.

Then I went over the various King Louis in my mind. The best way to tour Versailles is to know some bite-sized snapshots of history, and there are three French kings you need to know. 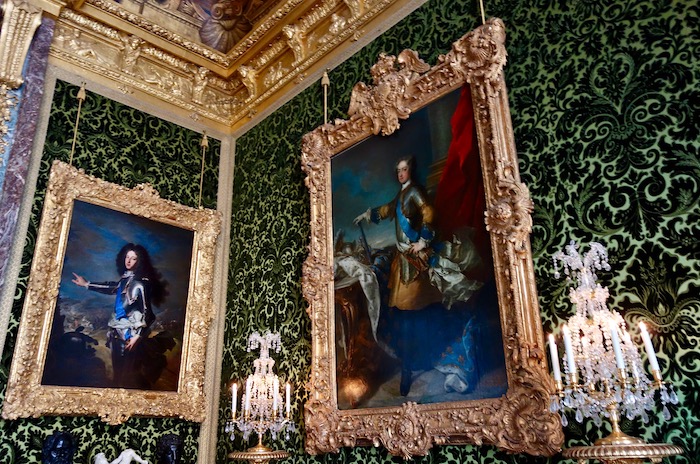 The kings of Versailles

About the Château de Versailles

Finally I reached the back of the 18th-century palace. Pale and harmonious, with straight lines, 700 rooms, 2153 windows and 67,000 metres of space, the massive Baroque building spread out before me like a sun-warmed cliff. Only something was wrong. I could see people inside but the door was locked.

I rattled the handle and squished my face up to the window but was totally ignored. Now what was I supposed to do? I doubted things like this ever happened to Madame du Pompadour.

I paced up and down along the back of the palace – no easy feat when it’s the size of 12 football fields – and looked for a way around to the front. When I saw a woman unlocking a wrought-iron gate about 100 metres down from the palace I whipped over.

I was tempted to tell her to eat cake. Briefly I thought of storming the gate just as a small group of rioters did during the Women’s March of 1789. Spearheaded by a group of women in the markets of Paris, angered over the shortage of bread, the march was a key moment in the French Revolution. Armed with kitchen knives, pikes and other rudimentary weapons, they marched to Versailles in six hours, their numbers swelling into the thousands as they went.

At dawn some of the protesters found an unlocked gate and entered the palace. Chaos ensued. Two guards were violently killed. Marie Antoinette barely escaped with her life. The royal family was forced to leave their hallowed isolation of Versailles for Paris.

I gave the woman a plaintive look. She relented and let me through.

Phew, I thought, running around the front of the building and reaching the guided tour reception area in the North Ministers Wing just as the tour was departing. Adding a guided visit is one of the best ways to tour Versailles. It’s only €10 extra on top of the regular admission price and comes with some valuable perks.

Reasons to do a guided tour of Versailles

As a bonus we were going to see the Royal Chapel. We all shuffled in over inlaid marble floors of black, white and red, then cricked our necks up to see the soaring pillars and ornate vaulted ceiling complete with cherubs and gold. Unveiled in 1710 towards the end of the reign of Louis XIV, the two-level Royal Chapel is where Louis-Auguste and Marie Antoinette were married, and it’s here the court would gather for the King’s Mass each morning at 10 a.m.

I looked at my watch, it was just 10:00 now. Pretending my companions were courtiers rather than camera-toting tourists, I enjoyed a few moments feeling imperious and aristocratic because people who had bought a regular admission ticket to Versailles without the guided tour could only look in past a rope and wonder at our splendour. It doesn’t take much to give me illusions of grandeur.

Fortunately I’d dressed for the part. I’d worn a sequined net jacket over a knit lace top. And if you think this is too many sequins for 10 a.m. I have one word for you: VERSAILLES. Don’t you think Madame du Pompadour ever dressed up?

The Hall of Mirrors – the most famous room in Versailles

The best place for sequins in the Château de Versailles is the glittering Hall of Mirrors, so once our tour of the private apartments was finished I made my way there. Chandeliers dripped from the ceiling like crystal clouds, the sun slanted in across warm wooden floors and the 357 mirrors gleamed in the light.

A long gallery connecting the Queen’s Apartments to the King’s Apartments, the Hall of Mirrors is an homage to French superiority in matters of politics, military might, art and riches (and anything else you can think of). The 30 ceiling paintings depict the successful reign of Louis XIV while the mirrors, an extravagant luxury for the time, stood as gleaming proof that France could rival Venice in mirror production (even if they had to bribe Venetian artisans to move to France to make them).

Basing in the reflected glory of the Hall of Mirrors, I hardly even blinked when a guard scolded me for setting my jacket on the floor (so I could show off my sequins). I was still feeling quite regal as I  glided out of the gallery and found my way to Ore restaurant in the Pavillon Dufour.

Lunch at Ore is one of the best ways to round off your tour of Versailles. Helmed by celebrity chef Alain Ducasse, the restaurant is the most delicious addition to the palace in centuries. The decor is a modern answer to palace opulence, which means it still has bling but in a minimalist sort of way. Light fixtures look like golden postmodern suns, chairs are slim and sleek and tabletops are a dull gold. The patrons around me were mostly men in suits and chic French women toting YSL bags and Chanel.

Honestly, this was as good as being in the king’s inner circle. Feeling sophisticated I ordered a glass of St Emilion Grand Cru to accompany my bavette of beef. Crash. I knocked over my glass. Red wine pooled on the gold tabletop and dripped into my lap. The other diners looked over, not a trace of sympathy on their faces. Just like that, my champagne bubble burst. My face turned as red as a wine stain. I may love luxury travel but it wasn’t going to make me an aristocrat. I was just a loser in sequins.

C’est la vie, I thought as the waiter rushed over. At least at Versailles you can pretend for a day.

Travel tips for the best way to tour Versailles

The ultimate luxury? Try a private backstage tour of Versailles. It will cost you.

Obsessed with French historical fashion? Do a dress up photo op at Costumes and Chateaux. 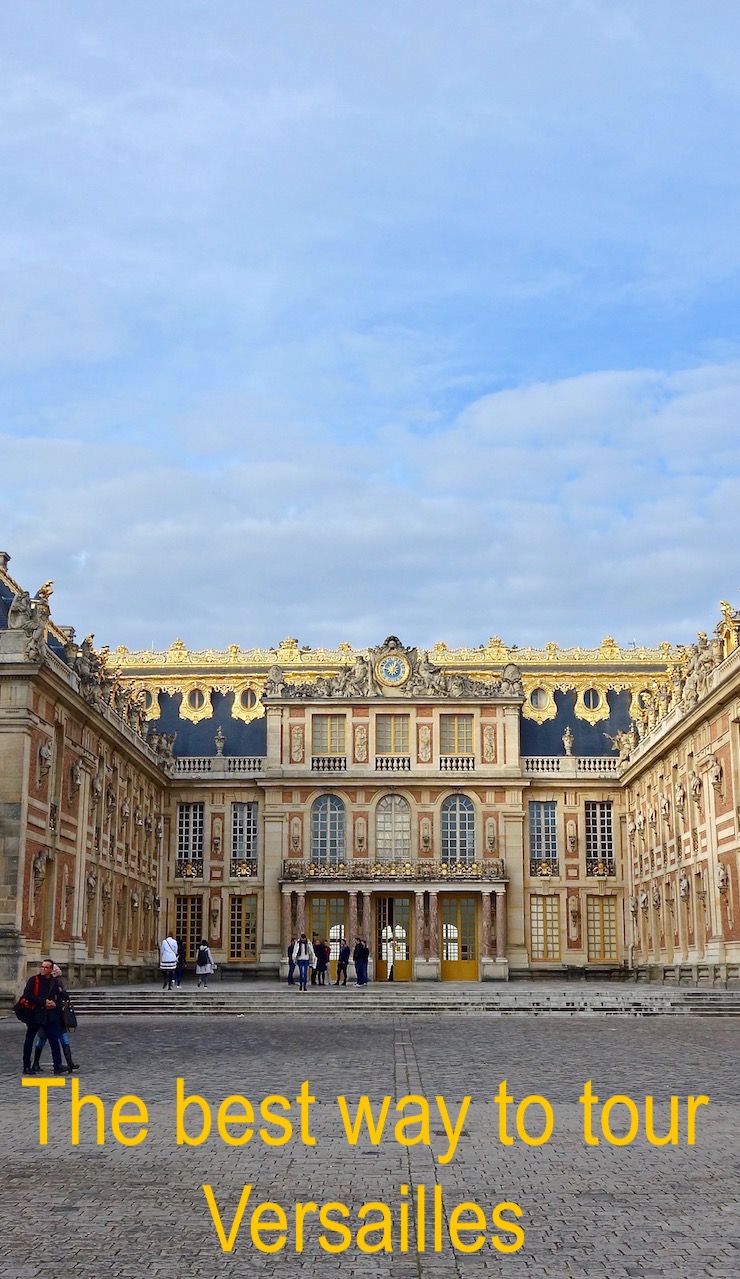 For more information on the best way to tour Versailles and other top French destinations visit the official French Tourism website.

Where to Stay in Palm Springs: 8 Hotel Reviews
Next Post:Renting a luxury yacht in the Balearic Islands