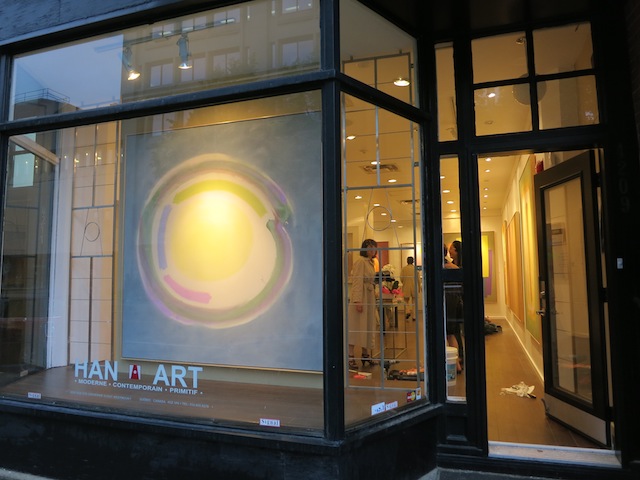 William Perehudoff paintings of the 80s

This essay is about William Perehudoff’s paintings from the 80s

My father, artist William Perehudoff, now in long term care, unable to walk and not doing well health-wise, still rocks when it comes to his art.  A painter with a career spanning decades, he devoted more time and thought to the art of composition and colour than anyone will ever know. I can still see him, sitting in his chair in his studio, studying a book on Matisse as if it held the key to the Holy Grail – and for him, in a way, it did.

When a  museum recently wanted to know more about his work from the 80s – and a few specific paintings in particular – it made me re-look at this pivotal time in his career. So here’s the essay I wrote. Read it and tell me I’ll never be an art writer …. but I’ll continue to combine art and travel if I can.

William Perehudoff is one of Canada’s foremost modernist painters. His career has spanned decades and his work is found in numerous public collections including the National Gallery of Canada, the Art Gallery of Ontario, the Canada Council Art Bank, the Montreal Museum of Fine Art and the Museum of Civilization.

Known primarily as a colourist, Perehudoff was born in 1918 to Doukhobor parents. He grew up near Langham, Saskatchewan, and his representation of space has always been influenced by the wide expanse of the prairies. There have been other influences. His interest in Mexican muralists like Diego Rivera took him to the Colorado Springs Fine Art Center to study with the eminent French muralist, Jean Charlot. Charlot encouraged Perehudoff to go to New York where he studied with Amédée Ozenfant, one of the co-founders, along with Le Corbusier, of Purism, an offshoot of Cubism with the decorative elements stripped away.

In the late fifties, Perehudoff began attending the Emma Lake Artists’ Workshops in northern Saskatchewan. This brought him into contact with international artists and critics like Color Field painters Kenneth Noland and Jules Olitski, and perhaps most importantly, the New York art critic Clement Greenberg, who was supportive of Perehudoff’s direction toward pure abstraction.

After the 60s, in which Perehudoff was mainly known for his large-scale works using circles and rectangular blocks of colour on raw canvas, and the 70s, when he became known for thin stripes on stained backgrounds, my father branched out. At this time, feeling that the 70s work was fully realized, Greenberg encouraged him to explore new avenues.

Just at this time, Perehudoff was becoming interested in texture, using thick acrylic gel to create organic shapes that rise off the flat surface of the canvas. The coloured shapes, similar in size and topology to the hard-edged rectangles of the 60s, are nonetheless very different because they are completely gestural. These gel works have an immediacy about them because there is no rethinking the placement – the gel is thick, the colour pure and once on, it cannot be removed or rethought. With only one chance to get it right this gel series, which  Perehudoff worked on throughout the early 80s, challenged him to incorporate a new confidence into his brushwork. The end result is a calligraphy-like quickness and liveliness previously unseen.

The paperworks at the top of this post are  excellent examples of this series. Thick gel on raw paper backgrounds, they allow a play of colour and texture together which, in some cases, becomes quite sculptural. It was an important time in Perehudoff’s artistic career, a wide exploration between the flat more rigid geometric forms of the 60s and stripes of the 70s, and his later 90’s work which incorporates both stripes and rectangles.

The canvas below shows the next stage in Perehudoff’s career, yet another new mode of working with colour. Toward the mid to late 80s, Perehudoff pares out the thick gel, but retains the more organic or biological shapes of colour that show this immediate, rather than static, brushwork. Now the background comes more into play. The thin stains of diaphanous colour loosely echo the square of the canvas to contain the central colour forms. This is where Perehudoff’s mastery of composition comes into play. The central forms neither simply recede through this window-like opening, nor extend out, but hover, creating a vibration between back and forwards, bringing a soft vitality to the painting.

In the example above, the background stain becomes a diamond and the watercolour-like thinness of the layered aqua stain just inside the diamond adds to this vibrating effect, acting as an intermediary linking the central forms with the luminous purple stain of the perimeter background colour.

This ‘window’ series was far more prevalent that many people realize, preoccupying Perehudoff for a number of years as he explored soft colours, spatial perception and the dialogue between depth and composition, an important step in an evolution of styles that reveals a lasting preoccupation with colour harmonies and form.

A recipient of the Order of Canada, the Saskatchewan Order of Merit and a member of the Royal Canadian Academy of Art, William Perehudoff has exhibited widely in Canada, the US and Europe, including a widely-publicized exhibition at Canada House in London, UK, and in The Shape of Colour exhibition at the Art Gallery of Ontario.