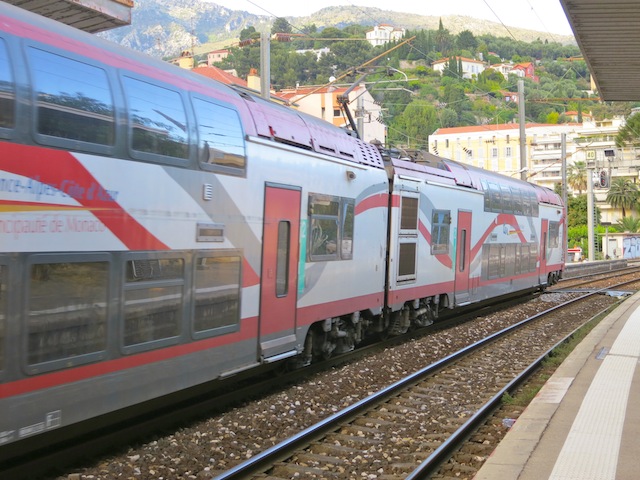 South of France Train, in Which a Man Pulls a Gun on Me

Luxury travel blog » Travel » Travel disasters » South of France Train, in Which a Man Pulls a Gun on Me
June 2, 2014 by Carol Perehudoff

The first thing that came to my mind when a young man pulled a gun on me on a South of France train was that no one would believe me if I wrote about it, especially if I also wrote about the bull-sized Russian punk rocker with a chihuahua who got mad at me on the train a week ago.

Then I worried that if I blogged about the man who pulled a gun on me and/or the bull-sized punk rocker with a chihuahua people would think the regional trains in the South of France are dangerous, and that is just not true.

I love South of France trains. (And Quentin and Uma are an item.)

I’ve been taking the train pretty much every day since I’ve been in Nice: to Cannes, Biot, Grasse, Menton and Monaco, and it’s the best way to travel.

I’ve met so many wonderful people onboard: the French school teacher, the two backpacker dudes from California, the Chinese girls I travelled with to Grasse and the young woman from Quebec who emailed me a rocking picture of Uma Thurman and Quentin Tarantino on the red carpet in Cannes.

(As an aside, Uma Thurman and Quentin Tarantino are totally into each other, trust me, you heard it here first.) So now that that’s out of the way, and you are assured that TAKING A REGIONAL TRAIN IN THE SOUTH OF FRANCE IS A SAFE AND PLEASURABLE EXPERIENCE, I’ll tell you about the man who pulled a gun on me.

The story of a South of France Train, in Which a Man Pulls a Gun on Me

I was travelling back to my apartment in Nice from the town of Biot. The double decker train arrived and I went upstairs.

I stopped at a section where four seats faced each other. Directly across from me sat a Frenchman and beside him, by the window, was his 20-ish aged son.

“Can I sit down?” I asked. This was really only a formality because I was already basically in the seat.

The young man in the window seat aimed a gun at my chest and giggled.”Heh, heh, heh.”

How do you react when a man pulls a gun on you?

I squeaked in shock. Yes. I really did squeak. Then I looked at his father in an affronted manner, as if to say, how can you let your son pull a gun on me? What kind of a father are you?

The young man, who had a sort of military hair cut, short on the sides a bit longer on top, like a bouquet of lilies of the valley, put the gun away in his bag on his lap.

I must have been in shock. Because instead of thinking a man just pulled a gun on me! Danger! Danger!I started wondering how I was going to blog about it, and I actually considered – which shows just how deep in denial I was – asking the young man to take the gun out again so I could photograph him with it.

Maybe I felt safer because the boy’s father was with him. Except then the so-called ‘father’ got up and scurried off to another seat at the back of the train car. The man wasn’t the boy’s father after all! And he was frightened enough to run away. That’s when I realized I was now sitting by myself on a train facing a man with a gun. Whose eyes were quite puffy. I think he’d been smoking something and it wasn’t Gauloises.

And then what happened?

And then I kept sitting there. I don’t know why. It was one of those deer-in-headlights moments. When he was looking out the window I surreptitiously snapped a photograph of him so in case he killed me, there would at least be a record of it.

At the next stop a woman with two children got on and they all tried to squeeze in the two empty places at our foursome. And that’s when I stood up so that the little boy could get in and sit by the window DIRECTLY ACROSS THE YOUNG MAN WITH A GUN.

What was I thinking? And then, just like a cartoon, I shook my head and reality cracked into my skull. It was the children that did it. I couldn’t let them sit there with a man with a gun. What if something happened to them?

Launching into James Bond mode I stood up so that I was now in the aisle beside the woman, who had her daughter on her lap and was beside the man with a gun. I tried to warn her by talking out of the side of my mouth.

Can you imagine what she thought? Why is this American woman who clearly can’t speak French muttering about bad garcon and shaking her head and making gun motions with her fingers? Sadly, it was more Inspector Clouseau than James Bond but I was doing my best.

I kept at it. If anything happened to the little kids I would never forgive myself. By now the mother was staring at me quite open-mouthed, and then the young man with a gun looked up at me and seemed to clue in. I froze. I almost started whistling in an innocent manner but thought that was too obvious so I looked away towards the front of the train.

Finally the mother understood that something was very very wrong (and also that I wasn’t going to go away). She said something about ‘descendons?’ and I nodded furiously, and she brightly told the children it was time to go down to the lower level of the train!

“Yes, it’s time to go down!” said the mother (or something along those lines in French) and we all trooped downstairs.

Once we were safely downstairs I tried to explain the situation. And it was really very sweet because she asked me if I was all right. And then we all started discussing the young man with a gun, and when he got off at the next stop, Nice-St. Augustin Station, we all stared out the window at him, even the other passengers because by now we were all talking about it.

We watched avidly as he sat down on a bench, took off his shoes and started rolling his white sweat socks halfway down his feet. I’m not sure what he was trying to accomplish because he couldn’t easily get his shoes back on with his socks all bunched up.

“Yes, he’s crazy,” said the woman. “I can see that.” She grasped my arm. “Merci.” And I was so glad the little children were safe that I almost started to cry.

And then she had her six-year old son recite his numbers and addition tables for me, which was really amazingly accomplished (on the son’s part, not on either hers or mine). And it cheered me up to no end, that we were all thinking about what 9 + 5 equals instead of about young men with guns on a regional train in the South of France.

And so I ratted him out. I went to the police office at the train station. (One thing I’ve got to say about the regional trains in the South of France – they have excellent security.) And the policewoman in the office rounded up all the other policemen and I tried to explain in my terrible French what had happened, and said that the man with a gun might be still sitting on the bench at Nice-St Augustin or on the next train here.

“And was it a real gun?” one of the officers asked.

Yes, it was a 9 x 19 mm Glock 17 semi-automatic pistol. HOW WOULD I KNOW? I didn’t ask to hold it! All I know is that it was a scary black thing with a pointy end.

The police assured me I was justified in being frightened, and then they started taking pictures of the photograph on my camera of the man with the gun, and I really wanted to photograph them photographing my photograph because it looked quite funny, but of course they had my camera so I couldn’t.

And we all lived happily ever after

In the end, the police went off to find the young man with a gun. And we all stayed safe in the South of France. At least I hope we did. I never found out if they found him.

About that punk rocker with a chihuahua

Don’t let’s forget her! The Russian punk rocker woman was angry because I wanted the seat in which she had her feet up. And I sat down anyway. And she started to yell at me, but her tattooed boyfriend told her to stop.

And it was in solidarity of being stunned by her aggressiveness that I bonded with a young Quebec woman who had sat down beside me, and who later emailed me the rocking picture she’d taken of Quentin Tarantino and Uma Thurman on the red carpet in Cannes – so it all worked out in the end. Just look at all the nice people you meet through adversity. (And Uma and Quentin are totally in love.)

A luxury evening in Cannes
Next Post:Yes! A flying Business Class on Etihad blog review