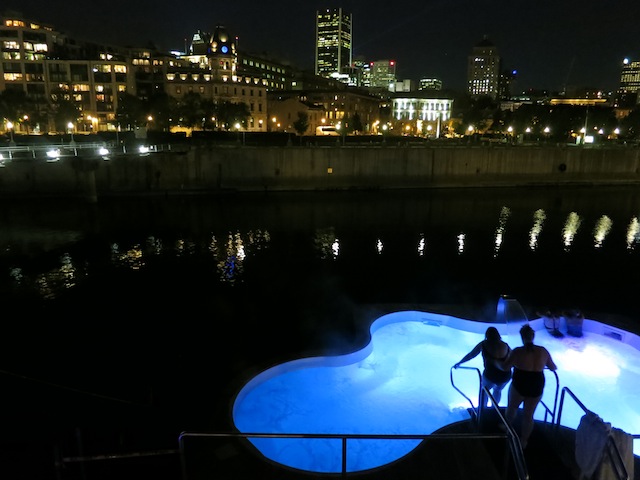 What is with Quebec’s obsession with Nordic spas? A Nordic spa, in case you don’t know (because you don’t live in Quebec) is a circuit of hot and cold water therapies. Based on Scandinavian bathing traditions, Quebec Nordic spas provide the opportunity to have fun bounding around from hot water therapies, such as saunas or steam baths, into something cold, such as a freezing plunge pool that makes you shriek in horror and think you are going to have a heart attack.

And then you have to sit down in a deck chair by a wood-burning stove to recover your equilibrium. And then you do it all over again. That, my leisure-loving friends, is the essential nature of Quebec Nordic spas.

After you are rested, you realize that you feel so good you need to do the circuit again. And at some point you go into an outdoor hot pool, because that’s the most fun of all.

Why does Quebec have so many Nordic spas?

It’s a mystery – a mystery I will solve, which is why you need to read this luxury travel blog. The bathing tradition comes from Scandinavia, so why is Quebec so in love with them? These Scandinavian-style baths are dotted all over Quebec.

Sure, there are other Nordic spas in Canada: Manitoba is getting one, Whistler has one and so does Blue Mountain in Ontario, but for sheer concentration and devotion I wonder if even Iceland could compete with Quebec.

Just how fanatical are people about Nordic spas in Quebec?

Quebec loves their Nordic spas so much that you’ll find two in Old Montreal alone, where space is a premium: Scandinave Spa Montreal and Bota Bota. Bota Bota is unique. It’s on a docked boat on the harbour. No, I’m not kidding, it’s a boat spa. That’s why is Bota Bota, get it? Boat Boat. Go there in the evening for a great city skyline view.

Getting to the heart of the mystery

Fascinated by this passionate merging of Quebec and Scandinavian cultures, I asked a top Quebec Tourism official why Quebec is so crazy for Nordic spas.

This is the same answer I got from some of the spa owners – so I was forced to find the solution myself.

Let’s look back in history

Here is the answer. Quebec loves Nordic spas because the Vikings settled in Quebec long long ago, far before Columbus set sail on the ocean blue. And the Vikings were Nordic and that’s why Quebec inherited the Nordic spa gene!

Now while I concede that the existence of Vikings in Quebec might not have been indisputably proven, here are some clues:

2) Norse-ish artifacts have been found in other places of Canada such as Labrador and Baffin Island, which just goes to show you that those Vikings got around.

3) Norse-ish artifacts have been found in the USA, too. A Nordic penny from the 1200s was discovered in Maine. A massive stone carved with ancient runes called the Kensington Runestone resides in Solem, Minnesota – so if the Vikings went there, it only goes to show that they probably went to Quebec, too. Because it’s the same continent!

So there you have it. All based on science, my friends. And now that we’ve solved the strange mystery of the Quebec Viking love affair and the province’s obsession with Quebec Nordic spas, you should visit that hotbed of Quebec Nordic spas for yourself, the region of Lanaudiere and la Mauricie – also known as Authentic Quebec – also known as ‘that place between Quebec City and Montreal.’

And once you’ve soaked in some sybaritic Quebec Nordic spas, you just might find you have some Viking blood in you, too.

For more info: on Quebec Nordic spas and Lanaudière and Mauricie visit the Authentic Quebec website.