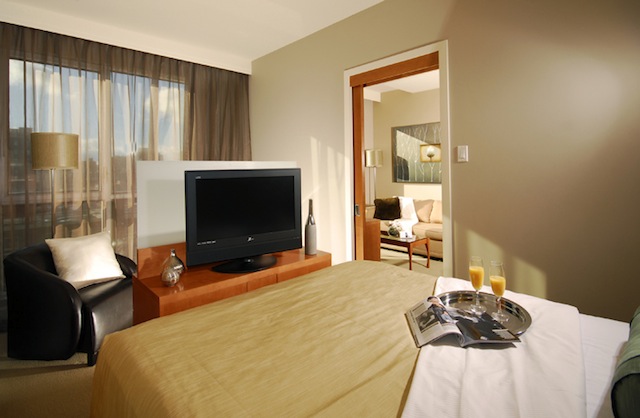 Here’s my review of the glittery Hotel Le Crystal Montreal, one of the city’s top luxury hotels

The curious thing about crystal

Here’s a curious thing about crystals (and this is scientific speak not New Age speak). Crystals produce an electrical charge when compressed. It’s called the piezoelectric effect.

It’s not called Hotel Le Crystal for nothing. There are chandeliers in the lobby, the restaurant and the spa and probably a few other corners I didn’t get to. 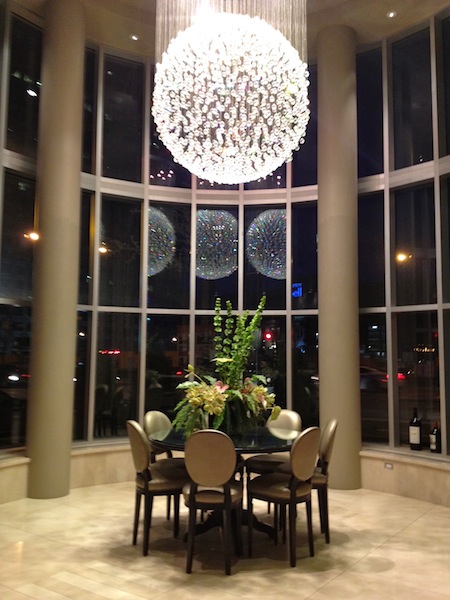 For people who believe in the healing power of crystals, this means the Hotel Le Crystal is a place where you could conceivably realign your chakras, centre your energy, and protect yourself from negative energy.

For a girl who just loves bling, it’s sparkling, pretty and conveniently close to Ogilvy, my favourite department store in Montreal.

From crystal to diamonds

But crystals aren’t haute enough apparently. The Hotel Le Crystal in Montreal has upped the ante and introduced their Diamond Collection Experience – a new category of suites, executive suites and penthouses that feature oversize flatscreen TVs (plus a second flatscreen TV at the foot of the bed that my 6’3″ husband accidentally kicked twice while sleeping. But don’t worry! No harm done!).

Other Diamond features include deluxe bedding, ultra comfy robes, toiletries by fancy-pants British company Molton Brown and desk stationery that includes a notebook and diamond-tipped pen. Wait – there was a diamond tipped pen? If I’d realized I would have stolen, er, I mean used it sparingly while I was there.

Suites at the Crystal

Our 10th floor suite was huge, with neutral tones and big banks of windows. And a balcony. There were two bathrooms, a kitchenette with a Nespresso coffee machine and a monstrously huge bathtub with a city view.

Oh, and you get treats every night on your pillow. Unfortunately I’m trying not to eat sugar, but when I saw the maple fudge candies one night I had to eat them. And then I saw the jellies so I had to eat those too, and then I saw the … well, I didn’t eat the lip balm – at least not all of it – so at least that shows some restraint. But I did eat arctic char at the hotel’s Parisian-inspired La Coupole Restaurant.

My favourite part of Hotel Le Crystal is the outdoor hot tub on the 12th floor. I love it! I love it so much I want to eat it. (Just as soon as I finish the lip balm.) What a view of Mount Royal.

Mark, the aforementioned husband, prefers the sauna and saltwater swimming pool to the outdoor hot tub. But I say men know nothing. They probably don’t even know the benefits of a Valmont Signature Facial, which is why I had one at Le Crystal’s 9,000 square foot Amerispa and he didn’t.

1) The Hotel Le Crystal has a great business centre with free WIFI, a printer that works and it’s open 24 hours a day. As I had a deadline I was there a lot – even though I really only wanted to be in the hot tub.

2) Breakfast in La Couple Restaurant is served until 3 p.m. 3! Finally, a hotel that understands me.

3) The hotel employs an award-winning mixologist so you can get a custom tailored cocktail.

5) Did I mention the crystal chandeliers?