Art and fashion surround Montreal’s most translucent art form, but what travellers might not realize it that glass has stories to tell. Read on to learn about a great way to explore the city: Montreal stained glass mysteries.

I don’t dare sit down in this glass-encrusted dress I’m wearing. If I break one of the attached silvery rectangles, not only will I damage a piece of art, the splinters would be a serious pain in the you-know-what.

“You’re the first person to try it on,” says designer Jessica MacDonald as I twirl around Espace Verre, a glass arts school, studio and exhibition centre housed in a former firehouse in southwest Montreal.

I’m not sure how I managed to convince Jessica to let me try on the dress or how it fit over my hips after the almond croissants this morning at Patisserie Kouign Amann, but it’s a great introduction to Montreal, a city that has plenty of glass and mystery. I am, in fact, on the trail of a mystery, The Mystery of the Disappearing Windows. (Although that’s not why I tried on the dress, I just really liked it.)

The Mystery of the Disappearing Windows

It was this intriguing headline on the website of Notre-Dame-de-Bon-Secours Chapel that appealed to my inner Nancy Drew. It’s hard to sleuth in a glass couture outfit, however, so reluctantly – and carefully – I shed the dress and accompany my guide, Marie José, to Old Montreal where Notre-Dame-de-Bon-Secours Chapel was founded in 1655 by Canada’s first female saint, Marguerite Bourgeoys.

The church doors are locked. “How am I going to solve the Mystery of the Disappearing Windows now?” I ask.

“Do you mean the disappearing glass at Notre-Dame Basilica?” Marie José replies. “There’s a mystery there.”

Either there’s an awful lot of vanishing glass in Montreal or I’m mixing up the two Notre Dames. To find out, we head down to Notre-Dame Basilica at Place d’Armes Square. Completed in 1829, this towering Neogothic basilica is a stained-glass showcase containing windows from three different historical eras. Like celestial skylights, three rose windows are set in the ceiling and unusually, the side windows depict historical rather than biblical themes.

“But what about the mystery?” I ask, gazing up at a scene of Jacques Cartier discovering the Iroquois village of Hochelaga (today’s Montreal).

“It started with arson.” Marie José leads me to the back of the church. “In 1978 someone set fire in a confessional causing millions in damages. During renovations five stained glass windows were found behind a brick wall. They’d been walled up and forgotten for more than 80 years.”

“What a great find!”

Two of the windows, St. Peter and St. Louis, now hang in the Basilica’s Sacred Heart Chapel, Marie José tells me, so we head that way. Masculine and medieval-looking, the stained glass windows glimmer with deep tones of blue, burgundy and gold.

“Why would anyone cover them up?” I ask.

Marie José offers a solution. “The windows were right behind the altar so parishioners couldn’t see the priest during services because of the sun shining through.”

One stained glass mystery down, one more to go

Well, that’s one mystery solved. I don’t think it’s my mystery, however, so the next morning I return to Notre-Dame-de-Bon-Secours Chapel. The current domed building dates back to 1771 – the foundations of the original chapel now mere stone traces deep in the church cellar.

In one of the offices I hunt up Karine St Louis, head of educational programming, who gives me a rare peek into the cellar’s depths. An eerie-looking room with ancient timber supports, it lay abandoned for decades, filled with dirt and debris. Then during an archeological dig here in 1996 two stained-glass angel fragments were found.

“They were part of a much-larger window made around 1855,” Karine says. “It was either the Assumption of Mary or the Immaculate Conception.”

A heavenly mystery in Montreal

And there it is. One of the angels is now permanently display in the chapel museum. Backlit, the angel glows with a luminous calm, his green wings and golden hair framing an unreadable expression. It’s hard to imagine that before Canada was even officially a country he stood watch in the chapel, then waited more than a century to reemerge.

“Who saved it, I wonder? And what happened to the rest of the window?”

“Why would anyone remove it in the first place?” I didn’t get it. This angel fragment was stunning, a rare piece of art.

“Like anything,” Karine says, “glass goes in and out of fashion.”

From stained glass angels to couture cocktail dresses, it certainly does. Evidently it can disappear and reappear, too, like the stained glass windows at Notre-Dame Basilica, carrying with them fragments of history. Montreal may be a City of Glass, but it’s a City of Secrets, too, making me wonder what other mysteries lie hidden behind its historical walls.

What to do in Montreal if you love glass

For info on Montréal visit www.tourisme-montreal.org. 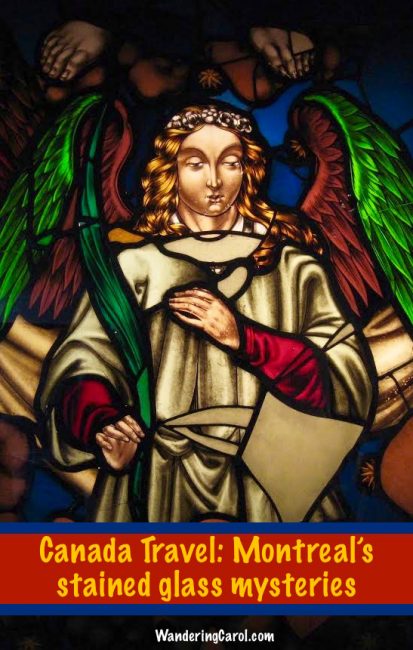 And what’s with Canada and stained glass mysteries? I put my sleuthing skills to work again in Watrous Stained Glass Secrets.

For more intriguing history, read The King’s Daughters in Montreal.