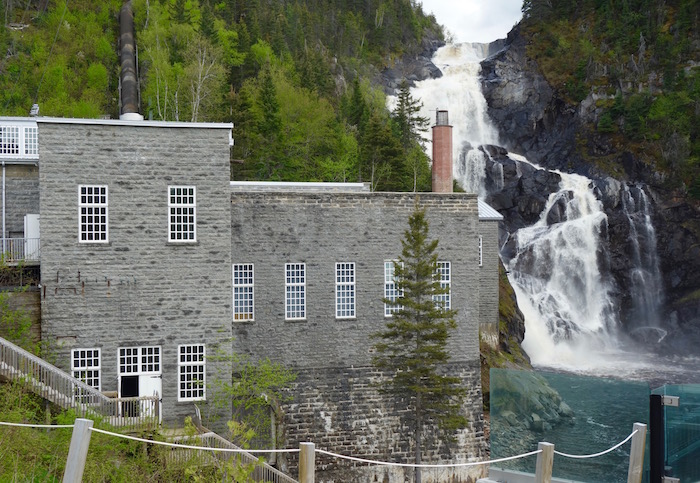 A visit to the historic village, Val Jalbert, in the Saguenay region of Quebec, is a step back into the fascinating world of an abandoned mill town. Paradise to its residents, it died an untimely death in 1929. 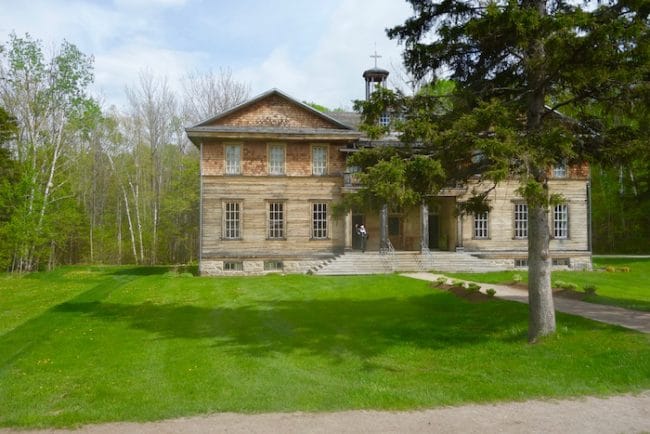 Do I need to explain why I was dancing barefoot in the middle of a deserted street at 3 a.m. wearing a leopard-print nightie and a black leather jacket? It’s not something I usually do, but the historic village of Val Jalbert in the Saguenay-Lac-Saint-Jean region of Quebec, Canada, is no average tourist destination.

What is the village Val Jalbert?

Val Jalbert is a ghost town. I mean that in the best way possible, as if its once-thriving streets were filled with the most warm-hearted phantoms you could ever hope to find, ones who loved their little mill town nestled at the bottom of the roaring Ouiatchouan Falls and saw no reason to leave.

Founded in 1901 during Saguenay–Lac-Saint-Jean’s vibrant industrial age, Val Jalbert was a model community, a company town of Quebec millworker dreams. The pulp and paper industry was booming, workers were paid up to double what other millworkers earned, and – unheard of for the time – houses had electricity and indoor plumbing. It was the goal of the mill owner, Dabase Jalbert, to make Val Jalbert the most modern village in Quebec.

It was a tight knit community of 950 people at its peak. The priest was strict, the nuns taught school and dances were held on Saturday nights.

“It was paradise,” a former resident said on video as I watched a short film in one of the restored village houses.

“Like a good film that you’ve seen and you can’t forget,” a grey-haired woman reminisced.

“I thought the priest was the devil,” an elderly man added with a glint in his eye (also confessing he used to sneak into the kitchen to steal cookies).

I wandered around the wooden house, the walls lined with photos of former residents. A picture of a dark-eyed woman caught my eye, something about her wistful expression and tumble of brown hair made me unable to look away. I wanted to know more about her.

“Did you see this?” my travel companion Liz whispered, pointing to a photo of a 16-year old boy. Scalded to death by steam from an exploded boiler, said the caption. We looked at each other and shuddered. No matter what kind of model village it was, tragedies happened. I stared at the other photos, wondering about the stories and lives behind each.

Why did Val Jalbert decline?

The village’s decline started when the industry turned away from non-transformed pulp to paper. This required chemical technology the mill didn’t have. In 1927 the mill was shut down, and by 1929 Val Jalbert was abandoned.

I learned more – no, that’s not right. I experienced more – at the old mill itself. In the cavernous Grinder’s Room, the history of Val Jalbert loomed all around us through a multi-media ‘spectacle’ of mist, music and film. Hologram-ish residents took us from the town’s optimistic beginnings to its ultimate end (not to mention a hippy takeover in the 60s, which I thought looked quite fun).

After the show a group of us took the cable car past the top of Ouiatchouan Falls. At 72 meters (236 ft), the falls are even higher than Niagara Falls, and provided power for the mill.

The falls up close – the glass-viewing platform

Afterwards we made our way to the new glass viewing platform overlooking the falls. As the water cascaded down, mist spritzing my face, I thought of the passage of time. Just as the waterfall churns over thousands of litres of water a minute, time churns over the years, and while the old Val Jalbert has been swept away, it has a new life in this historic restoration.

Today Val Jalbert is still a work in progress. It’s tremendously expensive to bring the buildings back to life using the same materials and building methods that were originally used to keep its authentic feel. A mini power plant, which is completely underground, has been established there to provide revenue.

While many buildings have been painstakingly rebuilt, others are weathered husks and craters, a reminder of how far Val Jalbert fell, and of how far it has come back.

A number of the old houses have been turned into tourist accommodation, and I was lucky enough to stay in a room overlooking the street. After a gourmet fillet de cerf at du Moulin Restaurant in the mill, I caught the old-fashion trolley back to Main Street. My accommodation was a period piece on the outside but boutique chic on the inside. My window looked out over the General Store, a shop that now sells plaid shirts and souvenirs rather than staples like flour and sugar.

I’d planned on an early night but apparently the ghosts had other plans, and I woke abruptly at 3 a.m. Tossing and turning I thought of the residents I felt I’d come to know, the boy who died of steam, the strict priest and the woman with the wistful face. I thought of the elderly man in the video talking about his idyllic childhood and the Saturday night dances.

I leapt out of bed, grabbed my jacket and and ran outside. The ground was damp under my feet. The air felt clean and velvety.

I whipped over to the General Store and peered in the window, leaping back when I saw a glowing blue apparition. On second glance, it proved to be the power button on a coffeemaker. Getting my breath back, I sat on the porch, feeling nothing ominous or any sense I was an unwanted intruder. If anything I felt a spirit of warmth – the love the residents had for their mill town paradise. Overcome with a sense of night-time freedom, I ran out to the road and did a few pirouettes, certain that the ghosts of Val Jalbert were dancing with me.

The historic village of Val Jalbert is open from the end of May to about the first week in October. Hours run from 10:00 a.m. to 5 p.m. except from mid June to the third week in August when they are open 9:00 a.m. to 6 p.m. Check the website for exact times and dates, or to make reservations. There are also some winter activities such as snow shoeing and cross country skiing. 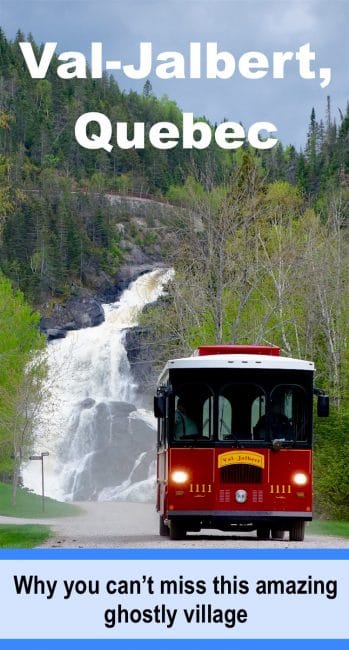 Where is Val Jalbert? Val-Jalbert is in the Saguenay-Lac-Saint-Jean region of Quebec, 8 km northwest of the town of Chambord. Address: 95, rue St-George, Chambord, Quebec, G0W 1G0.

Things to do in Val Jalbert

You’d be surprised at how many things there are to do in the village. Here are some highlights:

The historic village offers a range of places to stay, from the restored period houses and the inn above the General Store to mini cottages and camping. Double rates for the hotel-style accommodation start at CAN $289.50 and family rates from $379.50. Camping starts at $28.50.

Where to eat onsite

From the end of June to mid August the General Store offers a snack bar, the Cafe-Terrasse. In the old mill you’ll find fine dining at du Moulin Restaurant, an upscale restaurant that specializes in Saguenay-Lac-Saint-Jean regional cuisine. Or bring a picnic and enjoy the grounds.

If you’re planning on touring around Quebec check out my Things to do in Quebec City article or Road trip itinerary from Montreal to Quebec City. For more information on the Saguenay region of Quebec, visit the official website.

Conwy Castle, North Wales: why you should visit
Next Post:Luxury destinations in Switzerland