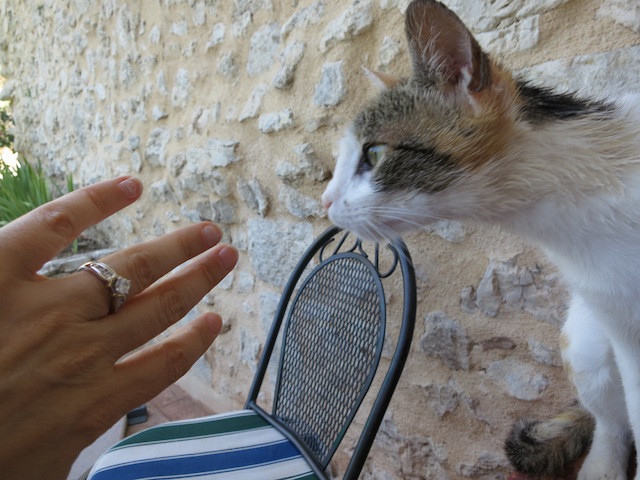 The big news – getting engaged in Umbria

The day started out normally enough. In the blistering heat of an Umbrian afternoon my boyfriend Mark and I left our farmhouse/villa at Guesthouse Runcini to cool off at Lake Piediluco. I had no warning whatsoever that ‘getting engaged in Umbria’ would be part of my day.

At Lake Piediluco I roped Mark into going on a pedal boat, which he really didn’t want to do.

And I learned that if you lean back in photos you lose the stomach rolls and if that flash goes off you lose the dimpled thighs. (Actually, the thighs stay, the dimples disappear.)

Then we had an amazing meal at Piermarini in the town of Ferentillo – this restaurant is a total find and so unexpected in tiny Ferentillo, the village near our villa. The carpaccio with truffles put me in a very good mood.

“We should sit on the terrace,” Mark said, driving up the steep hill to our rental.

“We should sit on the terrace,” Mark said.

So I sit on the terrace and he disappears into the villa. I’m looking up at the stars.

And looking and looking, and he comes rushing out of the villa and says, “I have something to ask you. I love you and would you marry me?” And then he thrusts a box in my hand.

He looks a bit taken aback.

“YOU”RE JOKING! YOU CAN’T BE SERIOUS. ARE YOU JOKING?” And my heart is racing and blood is pounding in my head. “GET OUT!” I say. And then I realize I’m supposed to open the box, but I’m so floored, and then a wee part of me is thinking there is no way he could pick out a nice ring by himself (sorry, honey, just a thought) and then I open the box and I’m like, whoaaa, that’s a ring. An excellent ring. I love this ring.

“Yes,” I say. (I would have said the same thing even if I’d hated the ring. Really, I would have.) And then I started to cry and then, because I have commitment issues, I said, “Can we just be engaged forever?”

The Getting Engaged in Umbria Party

“We have to have an engagement party!” I said. After all, it’s not every day you go around getting engaged in Umbria. So I went inside and got a package of salami to lure the 11 resident cats over. Actually only one cat came, we call him Scrufillino (though I suspect that’s an alias). So he got a lot of salami and loved us very much after that.

And the next morning the Getting Engaged in Umbria Party continued when I celebrated with Calico (also probably an alias).

And I got the full story from Mark, how he bought the ring a month ago and looked at 8 different stores and tried to pick something not too simple as I am a complicated girl. And I know I made the right decision by saying yes …

Because where else could I find a man who sweats in the shape of a heart? XOXO

Read more about Italy: about the Top Cities to Visit in Italy

Where to stay in Umbria: Our momentous getting engaged in Umbria happened at the Guest House Runcini