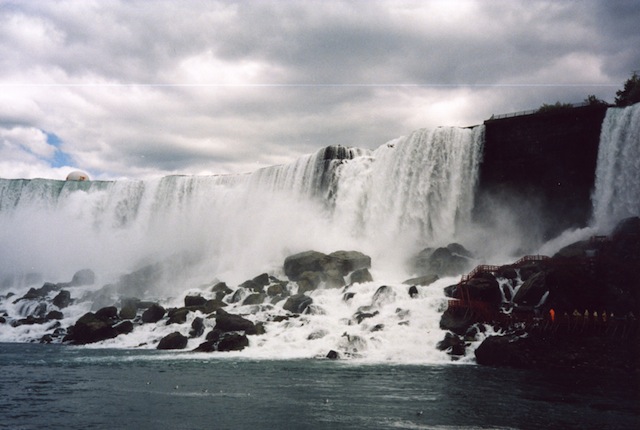 Here are five fun fact about Niagara Falls you never would have guessed. This iconic Canadian waterfall has a history you won’t believe.

Water thunders, tourists gasp and geysers of mist rise up like steam from a witch’s cauldron. A very big cauldron. Yes, it’s the ever-popular Niagara Falls I’m talking about. Overdone tourist destination? Of course, but when a destination hasn’t lost its lustre in more than a century, you now there is something worth seeing – and worth prying into its quirks and secrets.

I’ve stayed in a lot of hotels in Niagara Falls, but one of our favourites is the Fallsview Casino Resort. My husband and I were there for the Ice Wine Gala last winter, and the hotel is so handy because it’s connected to practically everything except the falls itself (and I’m sure they’re trying to figure out a way to do that, too).

You can wander into the casino, browse the shops of the Galleria Mall, or grab a bite to eat without going outside – something that is all-important if you’ve ever visited Niagara Falls in winter.

The hotel was also connected to the Ice Wine Festival, which was a bonus for anyone wearing high heels. In fact, coming back after the gala, I saw a handful of women holding their shoes and limping back along the corridor in bare feet. (I know. Ick.)

Our favourite restaurant in Niagara Falls – the Grand Buffet

Restaurants in Niagara Falls are overpriced, there is no way around it. Weirdly enough, our regular ended up being the Grand Buffet restaurant in the Fallsview Casino. Lots of stations, carving stations and desserts and … crab legs!

Aside from those two travel tips, here are five fun facts about Niagara Falls I bet you didn’t know:

1)   One of the first honeymooners to come to the Falls was Napoleon Bonaparte’s younger brother, Jerome, who brought his Baltimore-born bride here in 1804.

2)   Marilyn Monroe stayed at the historic General Brock Hotel (now the Crown Plaza Niagara Falls) while filming the movie Niagara. When it comes to hotels in Niagara Falls, there are a gazillion options but the old Brock is still a glamour girl and I love the 10th floor dining room view.

3)   Lundy Lane, now a popular outlet mall where yours truly has been known to shop, was the site of a raging battle in the War of 1812.

4)   Rather than marry a village elder who reeked of eau de bear, the Seneca Princess Lelawala paddled over the Falls in a canoe only to be rescued by Hinum, the Thunder God who lives in a cave behind the Falls. Okay, it’s a legend, but prove me wrong.

5)   Think men are always the daredevils? Not at the Falls. The first person to plunge over Niagara Falls in a barrel – and live to tell the tale – was 63 year-old Annie Taylor. That same year, Martha Wagenfuhrer shot the rapids in a barrel and Maude Willard died trying.

So there you have it, five fun facts about Niagara Falls. My conclusion? From the so-named Bridal Veil Falls (one of three waterfalls that make up the Niagara Falls trio) to death-defying women adventurers, Niagara Falls has a feminine heart and  soul.

Spa Vacation at The Balmoral, Edinburgh
Next Post:Thai Spas to salivate over