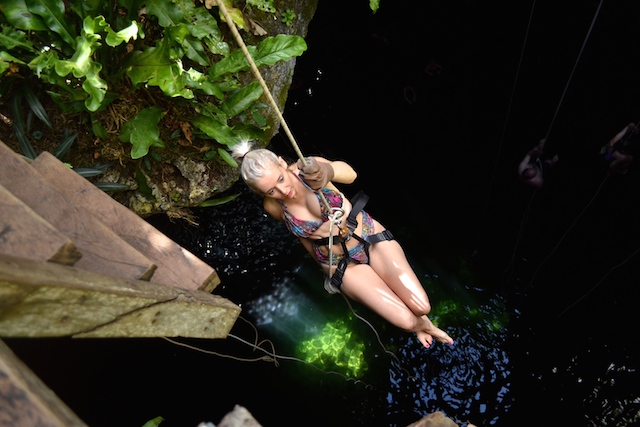 In other words, a cenote Mexico adventure.

What to do on a Riviera Maya Vacation

It was my original intention to find my sunny happy place in a deck chair and not move for a week. But. It’s hard to be in the Riviera Maya and not have the urge to explore, so my Adventure Self and my Sloth Self fought a mighty battle by the Grand Velas Riviera Maya pool.

Planning a trip? Check out these top all inclusive adult only resorts in Mexico

Adventure Self won, though in sympathy for Sloth Self, a compromise was reached. One day trip.  A trip to Ek Balam, a recently restored Mayan ruin older than Chichen Itza.

The trip was run by a sustainable tourism company Alltournative, a company that works with local Mayan communities to preserve the culture, aid in economic development and provide eco-archaeological expeditions for visitors.

Truth be told, I hadn’t paid any attention to the details. I’d listened to the rep at the hotel long enough to know what time our hotel pickup was and that I should bring a bathing suit, then put my shades on and went back to my important beach work involving lying prone and having a waiter bring a bucket of bottled water on ice to our cabana.

“First of all, we are going to visit the Cenote Maya,” our Italian-born guide, Annalisa, said, as my husband and I squeezed into the back of the tour van for the two-hour drive. “We’re going to rappel into the cave, have time in the Cenote Maya then have a traditional Maya buffet.”

Wait – what? Rappel? Who said anything about rappelling? While my Adventure Self was sniggering, Sloth Self was scrambling around in a panic saying, hey wait a minute, you didn’t warn me about this.

Read the brochure next time, stupid, Adventure Self said, gazing serenely out at a palm tree.

“Cenotes are considered sacred places by the Maya, so we will visit a Shaman first, for a protective blessing,” said Annalisa.

At this point both Adventure Self and Sloth Self sat up and said, “Wow!”

Not only was I excited about meeting a Mayan shaman, a combination of witch doctor, healer and priest, I was also intrigued by cenotes.

Common to the Yucatan Peninsula, cenotes are sinkholes formed when the ceiling of a limestone cave collapses, exposing the ground water underneath – the water being sourced from an underground network of rivers in the region. To make it more scientific, let’s call them big fat pools at the bottom of a cave.

These mysterious pools played an important role in ancient Mayan society. As there are no lakes or above ground rivers in the Yucatan, cenotes were a prime source of water for the Mayans and they considered them sacred.

At 80 metres wide, the Cenote Maya is one of the largest, if not the largest, in the Yucatan Peninsula. And I was supposed to rappel into it. Adventure Self was dancing with excitement while Sloth Self was saying, hm.

The scariest part was when I was strapped into a harness, leaning off the back of a platform staring into a black abyss.

It probably wasn’t the ideal moment to recall the ancient Mayans believed cenotes were an entrance to the underworld, the Xibalba, a place inhabited by gods and bad spirits.

Adventure in the Riviera Maya

I can still back out, I thought. Others in our group had opted to walk into the cenote via a tunnel instead, and the burly guy who was supposed to go before me had just backed out.

But, I thought, I’ve just been blessed by a shaman, and that is some powerful protection.

Shamanic Ritual on the Riviera Maya

It had been a short outdoor ritual near a stone shrine, a ceremony involving our group holding hands while the local village shaman chanted and the smoke of copal – a resin used in sacred ceremonies – had spiralled around us. With the lush jungle around us and smoke swirling through the air, I had found it quite moving – a short moment to stop and try to ground myself in the locale.

My toes still gripping the wooden platform at the Cenote Maya rim, I concentrated on the blessing rather than the fact I was wearing nothing but gloves, a bikini and ropes, about to go straight down into an 80 metre-wide gateway to the underworld.

A Leap of Faith

There was a brief time-stopped instant while my stomach crunched in fright, then my feet swung off the edge and I was hanging over a pit black as a Mexican night sky. As I descended further into the cenote an astonishing world opened up.

Strange rock formations, stalactites and mottled walls surrounded me. Far below were the dots of people floating on inner tubes. My fright vanished like a plume of copal smoke. And my first coherent thought was that I was going to descend as slowly as possible to make every moment of this cenote Mexico adventure last.

Swimming in a Cenote

You can’t dangle in space forever and eventually I hit the water – although ‘hit’ is the wrong word – more like I was captured gently by one of the local Mayan boys whose job it is to catch hapless tourists and deliver them to safety.

How to Experience a Cenote

Some of the others in our group were keeping the cenote Mexico adrenalin going by swinging off a Tarzan vine and leaping off a platform into the water, but I grabbed an inner tube and floated as far away as I could. I didn’t want manufactured fun. I wanted to experience the Cenote Maya in the most natural way I could

High above, a circle of blue sky was visible, like a painted medallion, while the cenote interior blinked with flickers of sunlight. The water beneath me was black as crude oil, but clean and pure. Occasionally I felt tiny things bump up against my body.

As I am more scared of water than heights (I know, I know, it’s weird), I tried not to think of that creepy cave lake in Harry Potter and the Half-Blood Prince where dead bodies are floating under the surface, waiting to drag mortals under.

I also tried not to think about how some sacred cenotes had been used for human sacrifices, how skulls and bones had been found deep in their lairs. Instead I focused on Chaka, the God of Water, who also dwells in cenotes.

Eventually I stopped thinking and just floated and gazed and reached a fingertip up to the cenote wall, feeling that connection with nature when it reveals something mammoth and surprising.

Alone in the Cenote

My husband swam over, and we drifted until Annalisa called us from the far side of the cenote. I looked around and realized we were the only ones still here.

“That was amazing,” I told her, swimming over and climbing out onto a wooden deck. “Really special. But erm, are there any live things in there?”

“Just blind catfish,” she said cheerfully, heading off ahead through the tunnel into the light.

Ewwww. But better than bodies. As my husband and I stood at the water’s edge taking a last look, I thought of that first moment of descent, the heady feeling of dropping deep into the unknown.

Our week with Transat Holidays in Mexico had been filled with incredible highs such as butlers, swim-up bars and 5-star cuisine, but one of the best moments had to be one of the lows.

Careful on the sunscreen – you’ll want it for Ek Balam, but no sunscreen or repellent for the Cenote Maya – it’s important to keep the water pure. You’ll want a bathing suit, shades and sunhat (unless you’re me and hate wearing hats, even on pain of sunstroke). Towels are provided.

Photos: If you have a GoPro, you can strap it on, otherwise you’ll need to buy photos from the young Mayan staff shooting your descent. Consider it a worthy expense, it provides employment and educational opportunities for the local youth and, as you can see from the some of the photos above, they do an excellent job.

Day Trips in the Riviera Maya

Other things to do in the Riviera Maya include visiting Xcaret, the Sian Ka’an Biosphere, Tulum Akumal, and going sailing.

As Transat Holidays Luxury Travel Expert, my trip was hosted. Read more about my stay at the Grand Velas in the Riviera Maya.

Antarctica luxury expedition cruises
Next Post:Things to do in North Wales