Why abstract art is not valid 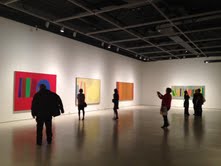 Some arguments never die. The question “Is abstract art valid” raised its head again some time ago while I was doing a bit of art travel, heading down to Windsor, Ontario, for the opening of my late father’s exhibition The Optimism of Colour: William Perehudoff, a retrospective.

Two other shows opened at the Art Gallery of Windsor on Friday night, John Kissick’s A Nervous Decade and an exhibition by Luanne Martineau. On Saturday there was a panel discussion with critics Roald Nasgaard and Karen Wilkin.

I’ve been caught in the middle of this conversation for years, as both the daughter of an abstract artist and as a former grad student studying visual art when conceptual artist Jenny Holzer ruled the art roost and my fellow masters students and I wanted truisms like ‘Nothing to Lose’ and ‘Good and Evil’ flashing over our studios in a lit up sign created from metal and light emitting diode units.

What I have learned, through the discussion after my father’s show, through my own stays at the Banff Centre of the Arts as a visual artist, and in my days at art school, is that abstract art is not valid.

1) Abstract art is too safe … just something to hang over the couch in a middle-class home.

Granted, it is safer to have an abstract painting hanging over the couch than having, say, a pickled calf with gold horns and hooves like The Golden Calf by superstar conceptual artist Damien Hirst over your sofa, but considering the calf sold for £10.3 million at auction, I wouldn’t say going the pickled calf route is any cheaper.

Of course by ‘safe’ – what is really meant is that abstract art doesn’t stretch the imagination, it doesn’t cause offence. It’s not going to shake up your perception of life, philosophy or creativity.

That’s the argument from one side. Let’s call them The Progressives, those who are more than ready to leave abstract art behind and move on to new art movements.

On the other side are the people who don’t think abstract art is valid at all, not because the world has moved on, but because it shouldn’t have left realism to start with.

Think of art as a linear series of movements, links in a chain if you will. (Of course, art is more like a tree, with roots, branches, nests and clambering squirrels, but for now we need to simplify.) Like every art movement, it seems, there is a struggle for dominance between what has been left behind and what comes after it.

Personally, as someone stuck in the middle of the pro/con abstract art argument since forever, I’ve never understood why there isn’t room for all art movements. I agree, however, that there are valid reasons to look at art with a critical eye.

2) Abstract art is too large and therefore unaccessible.

This is one of the stranger criticisms I’ve heard about Abstract Expressionist paintings. That abstract paintings are so monumental they cannot fit into an average home and so are out of reach to the average middle-class person.

Some are, some aren’t.

My father’s best work, in my opinion, is when he allowed himself – and had the space – to paint huge works on canvas.

Personally, I feel enriched by monumentality in many things: mountains; soaring Gothic cathedral – their ceilings so high they seem to defy gravity; and, yes, large works of art.

I’m happy to see monumental paintings in art galleries even though I can’t hang one in my home. I like the feeling of power they create, the sense they have swelled and taken on a life of their own.

In my father’s case, I think his urge to paint large has something to do with his prairie roots: big sky, big plains … and a big attitude towards creating.

I don’t believe William Perehudoff ever thought of himself as a regional painter. This is possibly because, coming off a farm from a Russian Doukhobor heritage, where poverty was ever present and formal eduction was scant, he didn’t know enough about elitist art attitudes to lock himself into that cage.

Then, when he dove into learning as much as he could about art – something that would become a lifelong passion – he simply gave that cage a glance and walked by it.

3) Abstract art is not valid because it’s commercial.

You can buy  and sell abstract art, unlike say, a thought, a conception, and the taint of money is ugly.

This might have been true at one time, but now the idea of what is commercial and what is above commercialism has been tossed on its head. When NFTs – non fungible tokens – which only exist in the digital space sell for more than $69 million at Christies, you know that commercialism and art are seriously entwined.

This is an argument that needs to be examined.

I found the following quote, interestingly enough, on the Maritime Union of Australia website, on a page dedicated to a Roy Dalgarno – a painter and socialist realist:

“During the Cold War social realism became associated with communism, while abstract expressionism (such as the works of Jackson Pollock and Mark Rothko) served as adjunct to American capitalism and its ideology.

“Abstract expressionism was a movement aligned with the rise of American cultural imperialism. It became allied with the right; social realism with the left. (Modern Art: A critical introduction by Pam Meecham and Julie Sheldon )”

I find this a fascinating topic, as well as a disturbing and complex one, so I’ll post the opposing point of view, which is that art was political long before abstract art came into view, and blatantly so. Kings, popes, emperors … they were the biggest patrons of art, and art was to a large extent designed with their public relations and branding in mind.

Abstract art, which stripped away identifiable objects from the canvas, sought, to some extent, to do away with politics in art. Or at least represent it on a more individual personal level.

After the war in the latter half of the 40s the hub of the Western art world shifted from Paris to New York, and Abstract Expressionism was the movement that planted the American flag on the great land known as Art.

It was the first time a major Western art movement was centered around North America rather than Europe.

So what about abstract artists not from New York? Is their work a pale imitation of the real thing? Are they not valid creators? Are artists from the periphery riding on the coattails of an art movement not their own?

To answer it I’m going to talk about spas. Stay with me here.

It’s a big trend in the spa world, and a valid one, to have treatments related to the locale. We’re talking about things like massages that incorporate local healing traditions, and essential oils made with local ingredients like Quebec sage and Niagara lavender.

Done right, the ‘go local’ movement is a fantastic addition to the spa culture. However (of course I have a however) if spas were only allowed to ‘go local’ we would have no Swedish massage (unless you were in Sweden).

We would have no Thai massage (you would have to go to Bangkok for that and I recommend Wat Po Temple if you do).

We wouldn’t even any yoga as that comes from India and going to the spa wouldn’t be any fun at all.

This tradition of borrowing is, in my mind, an essential fact of life marching on. Culture bleeds across borders.

And attitudes have changed. Today artists on the periphery are looked at with new interest. Sometimes with great interest.

Note: Someone asked me to mention the fact that the ‘culturally imperious’ American artists including Kenneth Noland and Jules Olitski and art critic Greenberg took Saskatchewan artists like the Regina 5 and my father, William Perehudoff very seriously back in the 60s, while central Canada seemed happy to ignore them completely.

It has been. I wouldn’t deny it. Other than superstar artist Helen Frankenthaler, who travelled right alongside all the other (male) artists I’ve mentioned so far, no one else got a lot of play. Maybe Agnes Martin. (Who, was born in Saskatchewan!)

But I can say with great relief that female artists are being reexamined. New York galleries like Berry Campbell have been bringing to the fore female abstract artists who, because of their gender, were never given the same kind of press.

Seriously though, in the end, the argument will go on (after all we’re still arguing over the validity of Impressionism, aren’t we? Oh, what? We’re not?) and so will the reactionary nature of art.

One movement is a springboard, or maybe acts as a pendulum, for another.

Early Canadian abstraction can be seen as a reaction against the Group of Seven landscapes. And Colour Field artists like my father, engaged in simplifying art down to essential elements, with their staining and flat planes of colour, can be seen as reacting to the more gestural work of earlier abstract expressionists like Willem de Kooning and Jackson Pollock.

And so Colour Field/abstract art is reacted against in turn.

As New York critic Karen Wilkin said at the panel discussion, “the son always kills the father.” Which brings me to my final conclusion, that my dad is just lucky he had daughters.

William Perehudoff at the Glenbow Art Gallery in Calgary

10 Ways to Tell When You Travel Too Much
Next Post:Ouch! Slammed in the media