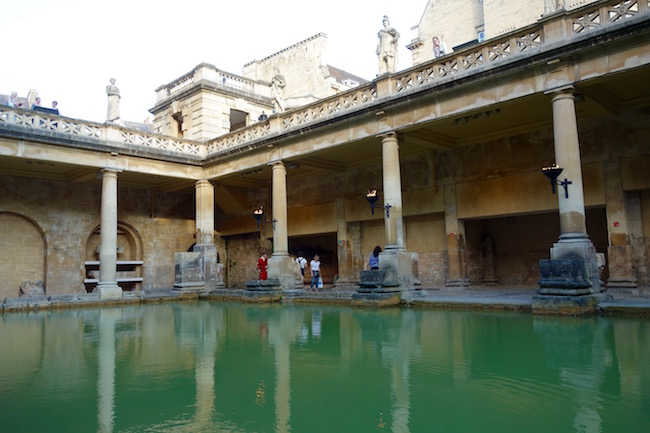 Visiting the Roman Baths in Bath, England, is the highlight of visiting this beautiful town in Somerset. It’s an easy day trip from London and here’s everything you need to know. 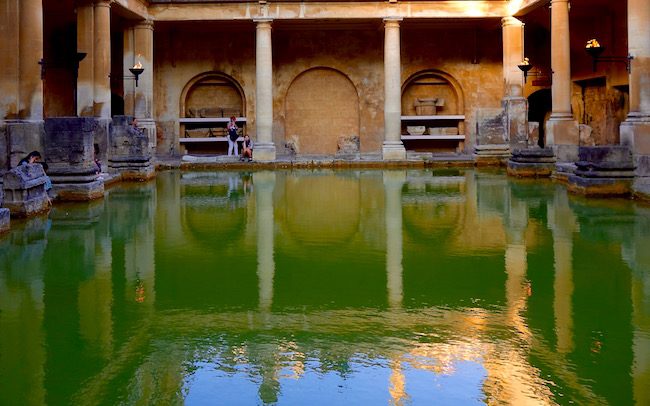 It’s all I can do to stop myself from hurling myself into the brilliant green water. The Great Bath, the centrepiece of the Roman Baths in Bath, is one of the most astonishing pieces of history I’ve ever blinked at. It’s the emerald of Europe’s spa towns indeed, and no matter how many times I visit, it’s always the same. I want to glide into the water like the goddess Sulis Minerva herself. It would be like swimming in a jewel.

Sitting on an aged worn step just above the Great Bath, my fingers hovering dangerously close to the water, I remind myself the water is only translucent emerald because of algae, that the Great Bath was closed for swimming in 1978 after a teenage girl contracted meningitis from an amoeba in the water and that most importantly, if I went in I’d be barred from visiting the Romans Baths in Bath, England, forever. And that would never do.

I lean back against a pillar and try to imagine the baths as they were in Roman times, when the town of Bath was called Aquae Sullis and the Great Bath part of a cavernous hall 40 metres (130 feet) tall.

Today the Great Bath is open to the skies and possibly even more eye-catching than it was in 200 AD. Weathered pillars surround the rectangular pool, the water is still steaming hot, freshly sourced from England’s only hot springs, and the open-air terrace above is ringed with statues of Roman emperors and statesmen, Victorian additions carved in 1894. Two layers of history, so many centuries apart.

What to see at the Roman Baths

The Roman Baths are more than a pretty pool. They’re a museum, temple and heritage site all wrapped up into one.

The site is divided into four main sections:

Travel tips for visiting the Roman Baths: It takes at least two hours to explore. Pick up a free audioguide in the Victorian-era entrance hall just off the Abbey Courtyard.

History of the Roman Baths

The Roman Baths are a vast bathing complex built over the source of Bath’s hot springs. Constructed in the 1st century AD, and extended over the next couple of centuries, this makes them 2,000 years old. It bends my brain just to think about it.

Even before the Romans built on the site the steaming springs were revered by the Celts who worshiped the goddess Sulis here. The savvy Romans, who knew how to get along with people once they’d brutally conquered them, merged the Celtic goddess Sulis with their own Roman goddess of healing, Minerva, and built a temple to the newly-created Sulis Minerva next to the springs.

A brilliant bit of diplomacy, don’t you think?

What to see at the Roman Baths – the highlights

The Gorgon is a surviving and very scary relic from the frieze (that’s the top front bit) of the Temple of Sulis Minerva. Though there is much debate, it’s generally believed to be the head of a Gorgon, a fearsome-looking symbol with snakes for hair.

The Gorgon is associated with Minerva (though how the Goddess of Healing ended up with a moustache and a face that looks like the cowardly lion from the Wizard of Oz is beyond me). Nonetheless it’s very striking and rare and there is a good spot here to sit down and watch a little film.

The golden head of Sulis Minerva

Deep in the underground section of the Baths you’ll come to the gilt bronze head of the Goddess Sulis Minerva. This is one of the major finds in all of Roman Britain. It was once part of a statue in the temple, and if you’re listening to your audioguide, you can listen to Bill Bryson saying she’s not the type of head he’d want to have a beer with.

Well. Of course not. If you were going to drink with Sulis Minerva you’d have champagne, or at the very least a healing glass of mineral water.

In Minerva’s defence I’d like to say that Bill Bryson doesn’t have the type of face I’d like to have a beer with, but this would be a lie because of course it is. He’s one of the funniest writers I know.

Check out the Curse Tablets

It’s easy to glorify the ancient Romans and think they all went around carving statues, crafting delicate mosaics and conquering kingdoms, but it’s nice to learn they could be just as petty as we are. Reading the curse tablets displayed in the museum section of the Roman Baths is one of the best insights into the Roman psyche you can possibly find, mainly because it shows them on such a human level. And what I mean by ‘human’ is grumpy, thieving and vengeful. 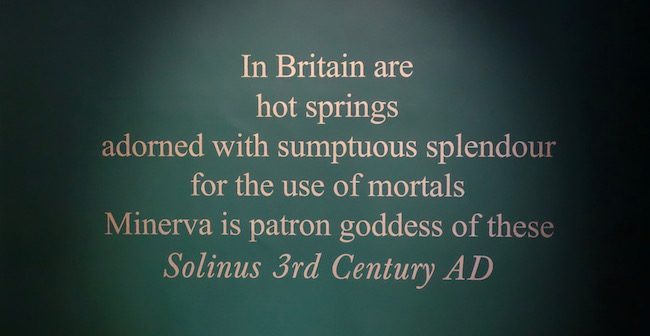 What are curse tablets?

The curses were messages inscribed on thin sheets of lead or pewter, rolled up and thrown into the Sacred Spring, where the spirit of Sulis Minerva was believed (and is still believed in my heart) to live.

What do the curse tablets say?

One of the Roman Bath curses asks that a stolen brass vessel “be filled with the blood of the thief.”

Another says, “To Minerva the goddess of Sulis I have given the thief who has stolen my hooded cloak, whether slave or free, whether man or woman. He is not to buy back this gift unless with his own blood.”

Particularly heartwarming is the curse offered by Dicomidis, whose gloves were stolen at the baths. “He asks that the person who has stolen them should lose his mind and his eyes in the temple where She appoints.”

Bathers in Bath take note: Many of these stolen objects were taken while the Romans were bathing so let this act as a reminder: If you want to soak in the baths over at the Thermae Bath Spa across the street, where you really can go into the water unlike in the Great Bath, be sure to store your valuables in a locker.

Next to the Great Bath is a smaller room housing the Sacred Spring. Take a minute to stop and breathe it all in. This was the spiritual heart of the Roman Baths, a place of reverence back in a time when there were no explanations for the existence of hot springs other than that they were created by gods. The Great Bath might be the looker, but the Sacred Spring is the spot that packs the spiritual punch.

How are Bath’s hot springs created?

Today there are very logical explanations about the rain falling onto the Mendip Hills and travelling deep through limestone on an 8,000 year-old journey during which the water is heated geothermally, but in my soul of souls I still believe that hot springs are created by gods.

Go ahead, prove me wrong. You can’t right? I rest my case.

End your visit at the Pump Room

The final stop on your visit to the Roman Baths should be the elegant Pump Room, which dates back to 1706. This is where the Georgians, who were Bath fanatics, came to drink the healing mineral water.

Today you can do the same. Wait at the counter by the fountain. Someone will eventually come along and pour you a glass.

A drink with the gods

You may not relish the taste of the hot spring water (it’s an acquired taste, and tastes a bit like soup where someone forgot to put in meat, vegetables and anything else), but look at it this way: You’re not just drinking from the springs, you’re raising a glass to the Goddess Sulis Minerva herself.

Travel guide for Visiting the Roman Baths in Bath, England 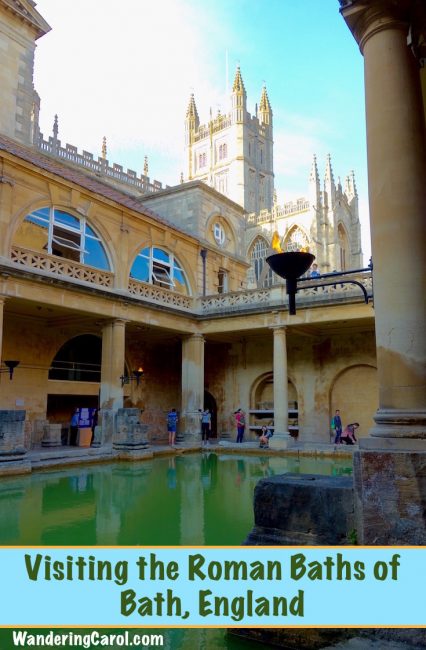 How to visit the Baths

Where are the Baths located? If you’re visiting the Roman Baths of Bath you’ll be pleased to know they’re central and less than a 10-minute walk from the train station. The entrance is in Abbey Church Yard. Make sure you pick up the audio guide that comes free with your entrance ticket. You can also join a free tour that leaves hourly.

When are they open? The Roman Baths are open every day of the year except Christmas and Boxing Day. They’re usually open until 6 p.m. except in July and August when they’re open until 10 p.m. – and seeing the Great Bath by torchlight is highly recommended. Opening hours are either 9 a.m. to 9:30 a.m. depending on the season.

Travel tip: The Baths can get very crowded so visit as early or as late in the day as possible.

Torchlit Visit and Dinner Packages are available at certain times of the year for £39.

Make a day of it

It would be hard to go wrong with the Spas Ancient & Modern Package that includes Roman Baths Entrance, entrance to the Thermae Bath Spa so you can soak like a Roman, and either a 3-course lunch or champagne afternoon tea at the Pump Room. Since these are, in my humble opinion, the 3 top activities in Bath, it’s a worthwhile way of spending a day in Bath. Prices are £79 weekdays and £82 on weekends.

Getting to Bath from London

Where to stay – check out my Bath hotel article.

What to do – Follow in the footsteps of Jane Austen in Bath.

Travelling on? For more travel ideas visit Where to go in England.