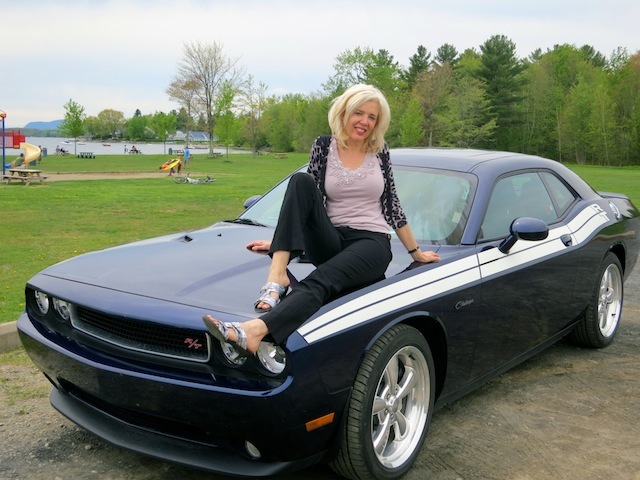 The two men at Avis Rental Car in Montreal whispered to each other then turned to my fiance, Mark. “We’re going to upgrade you,” they said as if this was the prize of the century. I’m not sure why we rated the special treatment. Maybe they thought Mark looked like someone who drove a Camaro in high school, listened to Bruce Springsteen and cruised up the main street of Hamilton with his elbow out the open window.

Or maybe we were upgraded because our short trip to the Eastern Townships in Quebec, about an hour east of Montreal, was sponsored by Tourism Quebec (much appreciated, by the way) and Avis wanted to give us a treat.

Whatever the reason, the two men were beaming as they led us out to our car. They were beaming at Mark, mind you, not me. I should have known something was up. “You’re going to like it,” they said to him.

I went outside. I saw the shiny automobile waiting. I blinked. I blinked again. The car was still there. Spanking new. White racing stripes. A 2013 Dodge Challenger. Ahem.

Now I know nothing about cars. I only know about men who I’ve dated who have driven cars. In the last decade I’ve dated two Saabs and an Audi – all slightly worn – so I’ve always considered myself a weatherbeaten European car kind of girl. But racing stripes? Seriously? This was a game changer.

“Iconic,” is what Dodge itself calls the 2013 Challenger. “The most affordable V8 Muscle Car in America.”

Yeah, that’s me all right. Oh, well. “Beats hitchhiking, I thought, and got in.

I’ve wanted to go to Spa Eastman for years. It’s a serious kind of spa, a tranquil place, where healing therapies, nature and back-to-land-ish healthy food are all part of the package. Somehow I thought I’d be driving there in something more sedate. Like a Mercedes. That would suit me. Or a Jaguar. Even an electric hybrid. But racing stripes?

And the transformation begins

“Yup, this is a muscle car,” Mark said, as he did up his seat belt, immediately unrolled the window and set off for parts unknown. I swear, I could see him changing before my eyes. Machismo started oozing from his pores. He turned on the radio.

Oh, good, I thought. Top 40 hits. The minute Triumph starts playing I’m doing a shoulder roll out the door. My main concern was what other people thought of me as we cruised by in our he-man car. I’m not this person, I wanted to say. I’m quiet. I hang out at the library. I have a pink oleander tree that I love very much.

Once on the highway Mark floored it, passing a line of cars. The engine roared. I braced myself against the dash and glared.

“I just had to get around those cars,” he said, slowing down. “And what’s the point of having a powerful engine if you can’t use it?” he added as we passed a sign for Magog.

I’d heard of Magog. It’s a tourist town at the northern end of Lake Memphremagog, a lake that is both lengthy in size (about 50 km long), and name, which loosely translates as the poetic sounding “big expanse of water.”

What is super cool about the lake is that for centuries there have been tales of a sea serpent swimming around in the depths named Memphre. It’s Quebec’s own version of the Loch Ness Monster, or British Columbia’s Ogopogo. Memphre is said to be about 18 metres long and hasn’t eaten any tourists that I know of. Which is a good thing, because sea monster or not, the town of Magog and the area around Lake Memphremagog is a popular cottage region. (And I’m talking about celebrity vacationers here, like Ontario’s Muskoka.)

I’ve known about Magog and Lake Memphremagog for years, because my sisters Rebecca and Catherine Perehudoff, and my mother, Dorothy Knowles, all artists, painted there one fall, so I’ve seen the region through a gazillion colourful paintings. Because I’ve seen it through an artist’s eyes, but not in the flesh, to me it’s a bit like the Mona Lisa or the Last Supper, something you know but don’t know, as mythical in a way as the Memphre sea monster itself.

Mark picked up speed. The wind blew my hair up to the ceiling. “Slow down!” I said, swivelling my head around at him, wondering how long before we got to Spa Eastman and I could get out of the car, put on a spa robe and get my old un-macho boyfriend back.

“What? People are passing us?” I said. “That’s not right. We have racing stripes!” I couldn’t help it. It was as if a monster had taken over me. A sea monster! The spirit of Memphre or at least of a Dodge Challenger. I turned up the radio and started head banging to a Deep Purple tune.

Yay, we made it! Spa Eastman here we come. Then I hesitated. “We can’t stop yet,” I said. After all, isn’t the whole point of a road trip to be on the move? Memphre was calling, or at least Magog and Lake Memphremagog was. Soon we’d be at Spa Eastman and serenity would prevail, but for just a moment I had to embrace the wild sea serpent within. “Surely we can get to Magog and back before check in time,” I said. “At least if you pick up the pace.”

Travel tips for the Eastern Townships

Read more: Yes! Carol and Mark do finally make it to Spa Eastman and what a revelation it was.

What to do in Magog

Cruise up the main street and check out cafes, galleries and boutiques – muscle car optional

Search for Memphre, the sea monster, along the beaches of Lake Memphremagog

Take a boat cruise of Lake Memphremagog and search for celebrity cottages (I’m not saying Donald Sutherland, nope, not saying that.)

Check out the open air labyrinth near Magog. Why not? If you can’t find the sea serpent, at least you can find yourself.