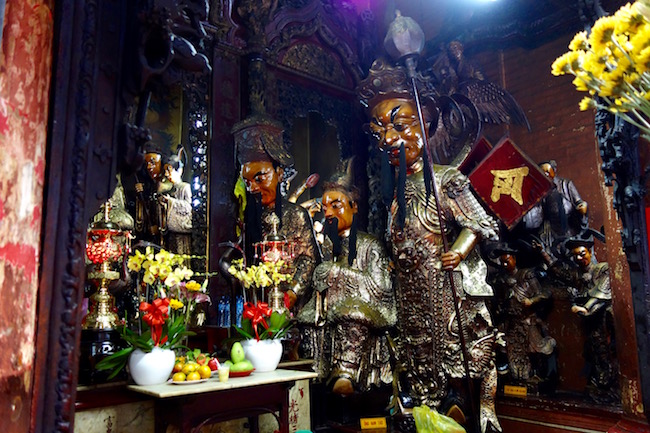 One of the most interesting attractions in Ho Chi Minh City is the Jade Emperor Pagoda. This otherworldly temple is well worth visiting if you’re in Saigon, Vietnam, but if you want to ‘live it’ rather than just see it, read on.

I don’t want to visit the Jade Emperor Pagoda like a tourist – I want to ‘feel’ it, and by ‘feeling it’ I mean I want to get under its skin. It’s my first day in Ho Chi Minh City (Saigon), and I feel like an outsider – which, clearly, I am.

One of the hardest things about being a tourist is always looking in from the outside.

The Jade Emperor Pagoda in HCMC

So what better way to try to experience a deeper part of Saigon than at the Jade Emperor Pagoda, a temple dedicated to the Supreme Taoist God who is the Gatekeeper of Heaven?

At least that’s my reasoning as I enter a leafy courtyard where lanterns shaped like blood oranges hang down from wires, and shrines filled with incense sticks fill the yard with fragrant smoke.

Because of the tortoises, this famous Saigon attraction is also known as the Tortoise Pagoda – but I can’t say I’d want to be a tortoise living here.

The one pagoda you shouldn’t miss in Saigon

Now that I’m here, watching people clasping their hands together and bowing, my desire to pay homage to the gods is overwhelming, though that’s not why I came. I came because I read it’s the one pagoda in Ho Chi Minh you can’t miss.

(Although there are apparently 25 other temples you shouldn’t miss in Vietnam, so good luck trying to fit them all in.)

The Jade Emperor Pagoda is one former President Obama chose to visit in 2016. I wonder if he was as clueless about what to do as I am?

Why visit the Jade Emperor Pagoda?

Inside, it’s a dark warren of rooms. There are hallways with peeling red paint, intricate carvings, elaborate woodwork and fearsome statues of gods holding swords.

It’s impossibly cluttered and mesmerizing. Through the smoke I make out altars, tourists, bowing locals, flowers, deities and shrines.

A mass of confusion

Questions are driving me crazy. What’s with the foaming drinks in mugs a woman behind an altar is pouring on fire that somehow never goes out? Are they drinks for the gods? (Don’t laugh, it’s quite common in Asia.)

Who are all these gods? Why are there two red horse statues with bells around their necks? I feel like I’m lost in an overstuffed antique store. 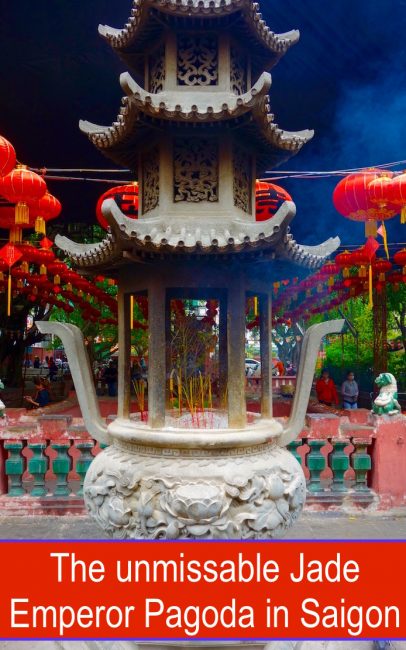 When in doubt, ask a local

A Vietnamese woman brushes past me and smiles. I jump at the chance. “What do I do?” I ask helplessly.

She grabs my arm. “Come on” She motions to a teenage girl in a baggy black T-shirt and black baseball cap. “My daughter,” she says.

They take me back to the entrance where a woman is doling out incense and candles behind a counter. A price list hangs on the wall.

My impromptu guide, whose name is Mai, asks for three sticks of incense and hands them to me. I pull out my wallet. “No need,” she says.

“Oh.” This is confusing. People keep telling me to watch out for locals who are all out to rip me off, but the taxi driver to the temple undercharged me and now I’m being given incense to offer to the gods. How am I supposed to be suspicious of people if everyone keeps being so nice?

Mai and her daughter, whose name is Emily, lead me back to the main room. Mai lights my incense from a candle and positions me in front of a large brass pot.

“Now you have to pray for something, then bow three times,” Emily says. “Now put a stick of incense in the pot. Just one.”

Deeper in the temple I add my second stick of incense to a different pot. The Jade Emperor with a long hanging moustache looks out through the smoke. Surrounded by his henchmen, the Four Big Diamonds – so named because of their gem-like toughness – the Jade Emperor doesn’t exactly appear benevolent, but not angry either.

Is it wrong to pay homage to a god that’s not mine, I wonder? To take part in a ritual I don’t understand? Or is it simply an attempt to honour another culture’s beliefs?

Deciding on the latter, I follow Mai and Emily to the next room, where she instructs me to add my final stick.

The God of Hell

Wait, I’m thinking. Didn’t my guidebook say this statue is the Chief of Hell? Yikes. Who am I praying to? At least he’s surrounded by a group of fellow gods, who not only dole out punishments for the wicked, but bestow rewards for good deeds as well.

If anything will inspire you to go out and do a good deed, it’s this room. I light my stick of incense and add it to the pot.

Here I learn about the horses. The one on the right is for women, the left for men. “It’s a special horse,” a different Vietnamese woman shyly tells me. “It helps take the prayers to the gods.”

It’s an irresistible lure. I clang the bell loudly.

“Now the blessing.” Mai points to a bowl full of red folded papers. She goes to pick one out for me but Emily stops her. “She should pick her own.”

I pluck out a postage-stamp-sized red paper. “Keep it somewhere, like in your wallet, ” Emily says.

“No.” With that, my impromptu tour is over. I go to pull out money, either to put it in the donation box or to give to Mai and Emily.

“Wait!” I call out as they turn to leave. I don’t want to lose them. They’re my link to the temple and even to Saigon. When you first arrive in a foreign city, you cling to what you can. “Er, thank you,” I add ineffectually, not knowing what else to say.

I want to tell them that their few minutes of time have made all the difference to my introduction to Vietnam and to the Temple of the Jade Emperor – that it pulled me through the portal between looking at the temple, and being – however superficial – a part of it, even for such a short time.

“Careful of your bag,” Emily says. Mai nods in agreement. They wave goodbye and are gone.

What to see at the Jade Emperor Pagoda in Saigon

The Hall of the Ten Hells

Look closely. These dark panels of carvings are an amazing depiction of the tortures that await the wicked.

Go upstairs to the rooftop terrace

One of the most serene parts of my visit was on the rooftop terrace. Follow the steps up and you’ll see it. From here it’s a phantasma of ceramic tiles, dragon carvings and colourful figures. Best of all, it offers a moment of peace.

I found the Kim Hua shrine the most poignant room of all. It’s a small room to the left of the entrance. In it is a modest-sized statue of Kim Hua, Fertility Goddess, surrounded by 12 statues of women doing various activities that represent human traits. Many women come here to ask for children.

Effigy of the City God

To the left wall of the Chief of Hell, is the City God. This is where I got the red packet, but apparently it’s more involved than my simple experience. Written on the City God’s hat are Chinese characters saying, ‘At one glance, money is given’.

It’s a popular spot. I saw many people slip money into the donation box and rub the piece of red paper against his hand (some say you should also circle it around a candle flame, though I didn’t see it myself).

How to get there.

A pagoda with many names

I had a tricky time trying to ask directions for the Jade Emperor Pagoda, probably because it has so many names. Try Jade Pagoda, Pagoda Ngoc Hoang, Chua Ngoc Hoang, Tu Hai Phuoc Pagoda, Phuoc Hai Tu, Phuoc Hai Temple or Da Kao Pagoda Seriously, it can drive you mad. Anyway, I ended up there easily enough – ask at your hotel desk to mark it on the map.

Where is the Jade Emperor Pagoda Saigon?

Is there a Jade Emperor Pagoda Entrance fee?

Nope. It’s free. There are a number of donation boxes.

There are many tour groups to this shrine and I saw every kind of outfit. I wouldn’t worry too much, but try to be respectful. I wore a T-shirt and cropped pants – it wasn’t exactly high fashion but on the plus side, no one looked at me in disgust.