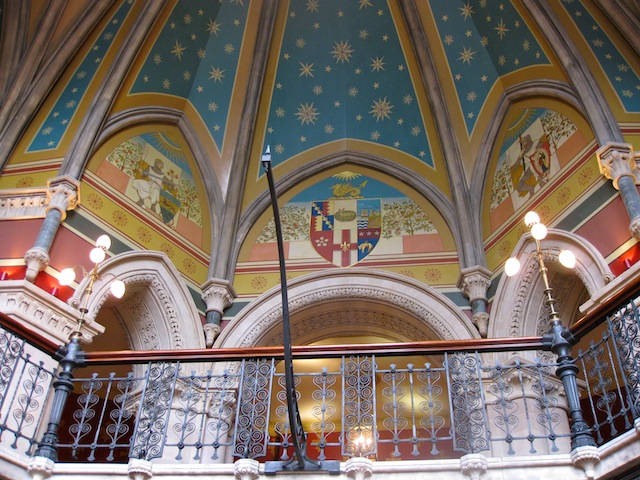 The newest London hotels: Check out my London video!

London is experiencing a HOTEL BOOM. For a look at some of the newest London hotels, check out my London video and get an inside look into some of the most exclusive new and updated hotels in Britain’s biggest city.

Oh, to hang out with Frank Sinatra, the Beatles and Catherine Zeta-Jones, all of whom have graced the elegant Savoy at one time or another. And after its astronomically priced three-year renovation, it’s certainly ranks as one of the most glamorous and fashionable London hotels.

The Savoy is gorgeous, mod and upbeat all at once, with black and white marble tiles, a leopard print carpet in the art deco River Restaurant and fresh flowers everywhere. To die for.

Sightseeing from the Savoy

Sightseeing is easy from the Savoy with Covent Garden being nearby and just a hop away is the National Gallery and the National Portrait Gallery on Trafalgar Square.

PS: Even if you’re not staying at the Savoy, stop in and people watch at the Beaufort Bar.

The new W London is smack in the centre of the London action and will up your hip quotient immeasurably should you stay here. Where else can you find beautiful people, W Rock Tea with ‘dark side of the moon’ finger sandwiches and ‘london’s burning’ chocolate pudding?

Out of all the newest London hotels, the W London is the most whimsical and fun, and painfully on trend, from the risque decorative plates on show in the lobby to the shimmery reception kiosks and disco balls.

Location of the W London Hotel. Just steps away from Piccadilly, Soho and the theatre district you’ll save on cab fare and have more time to dream up crazy requests for W’s Whatever/Whenever 24-hour concierge.

Drinking at the W Hotel London

While you’re at the W Hotel London, stop in for a ginger margarita at the connected Spice Market, the Asian-themed restaurant headed by celebrity chef Jean-Georges Vongerichten.

Conveniently located near the Houses of Parliament, St Ermin’s Hotel has been a hot bed of intrigue over the years. During WWII, Winston Churchill used to drink at the hotel’s Caxton Bar and it became a key meeting place for secret intelligence agencies.

During the Cold War, one of the infamous Cambridge Five, Guy Burgess, met his Russian handlers in the Caxton Bar.

Even more deliciously intriguing, a secret passage that was blocked off after 9/11 leads from the hotel to the House of Commons. If there is any intrigue going on at St Ermin’s these days, however, I didn’t happen to see it, and sadly, not a single spy approached me in the bar. Still, after a brand new facelift, St Ermin Hotel’s rococo lobby couldn’t be whiter and grander, and at the very least, you should spot a few MPs (a re-installed Division Bell signals them when it’s time to head back to Parliament).

The high Gothic architecture of the St Pancras Renaissance Hotel offers plenty of old world glamour. And rest assured, the hallways are wide enough for ball gowns and the centrepiece grand staircase curving under a vaulted ceiling will let you make a grand entrance. For something beyond grand, reserve a room in the exclusive Chambers.

Sightseeing from St Pancras in London

Location of the St Pancras Hotel. Personally, I don’t find the St Pancras as central as some of the others, but you can’t beat it if you’re either a bibliophile – The British Library is very nearby – or if you’re catching a train – the Eurostar leaves just outside the door.

If you’re interested in the St Pancras Renaissance Hotel’s fascinating history, sign up for a historical tour and have a Dickens-era punch at the hopping Booking Office Bar.

Previous Post:Harvard Summer School – not your average summer vacation
Next Post:Get the most for your reward miles with Aeroplan