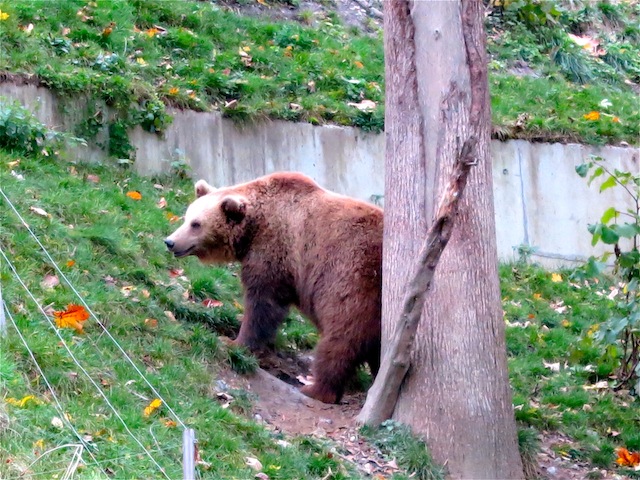 “There’s the Parliament Building,” Mark says as we enter the Old Town of Bern from the train station.

Considering walkable well-preserved Bern is the capital of Switzerland, and the Parliament Building the seat of Swiss Parliament, it’s not surprising that the large domed building is imposing and stately, but I want to see the bears. “Where’s the Bern Bear Park?” I ask, looking at the map.

“Look at those fountains!” Mark says.

Admittedly, the fountains of Bern are fun as well as historical, adding a colourful decorative element to Bern’s grey medieval Old Town, and part of the reason, no doubt, that the Old Town has been deemed a UNESCO World Heritage Site.

Of the 100 plus fountains in Bern, eleven have kept their original 16th century good looks, bright pillars topped with dashing figures fighting lions, waving banners and/or dispensing justice. But that’s not why I’ve come to Bern.

“Oh, that fountain has a bear,” I say, pointing to the Vennerbrunnen, a fountain with a bearded man in a suit of armour hoisting a bear banner on a background of red and gold.

Mark stops, a baffled not-quite-yet-irritated expression on his face. “What is so special about the bears?”

“And?” Mark asks. We may have only been married two weeks but I know him. He’d prefer to sit around the atmospheric Old Town, drinking coffee and taking in the laid back rhythm of Bern, rather than run around looking at tourist attractions – especially when it includes bears. He just isn’t a fan – of being a tourist or of bears.

The Bears of Bern are more than a tourist attraction

“I just really want to see the bears,” I say.

There is more to it, of course. The Bern bear park isn’t just a tourist attraction. The history of Bern is intimately tied up with bears. Legend says that back in 1191, the founder of Bern, Duke Berthold V of Zähringen named the city after the first animal he killed in a hunt on the Aare Penisula. And yes, you’re right, it was a bear. Bären means bear in German, so Bern it became.

Bears have been kept in Bern since 1513, ever since one was captured  during the Battle of Novara and taken back to Bern as a spoil of war. The only barren bear period in Bern occurred when the French invaded in 1798 and spirited them back to Paris.

Mark shrugs, resigned to visiting the Bern Bear Park. He still doesn’t share my enthusiasm, however, considering bears dangerous unpredictable animals capable of shredding a man’s tent (or a man, for that matter) with a few swipes of a clawed furry paw. (He saw that happen in Banff once, a tent being shredded.)

I take a more Winnie-the-Poo attitude towards Canada’s most ferocious mammal, although that time a bear was running straight for me up in the boreal forest of Saskatchewan wasn’t exactly a teddy bear’s picnic …  but at least a dog chased the bear away (in the nick of time) so I’m alive to tell the tale.

Nonetheless, even considering my perilous bear history, I’m captivated by the famous bears of Bern, and as Mark and I are now crossing the Nydeck Bridge at the edge of the Old Town, with a view of the riverside Bern Bear Park, I can just make out a large furry bottom hoisting itself up onto a low wall. “There! The bears of Bern!”

Mark puts his hands on the rail of the bridge and looks out, obviously relieved to note the large glass barrier between man and bear. The Bern Bear Park is a long tiered expanse of green that runs along the river bank, and as bear pits go, it’s deluxe.

Of course there has been a lot of controversy about keeping the bears captive as a city symbol and a tourist attraction – it’s hard to ignore the dilemma. In response the Swiss authorities built a vastly improved bear park  in 2009, a huge step up from the old concrete bear pit the bears used to live in.

The new park measures 6,000 square meters and gives the bears access to trees, paths, water as well as the old bear pit on the banks of the River Aare, in case the bears want to revisit their humble beginnings.

The Bear Park – a free attraction in Bern

As the Bern Bear Park is one of Switzerland’s top free attractions, there is no entrance point. You can walk around the top of the park and look down at the bears, or walk down along the river and look up at them. I run around both, up and down, which is quite exhausting really, in an attempt to get as close as I can to these fascinating creatures, trying to catch a glimpse into their secret bear life – and feeling guilty all the while for intruding – it’s a bit how I feel when I read celebrity tabloids. (Wait – what, me? Of course I don’t read those things!)

“Look!” I shriek. “They’re fighting. Suddenly the darker bear has started galloping after the lighter-coloured one. As bears can run up to 50 km an hour, he’s moving at a quick clip.

The lighter bear rears up. The dark one roars back. I see a mouth full of huge bear teeth and shrink back.

It doesn’t take long to distinguish the two bears of the Bern Bear Park. Finn, a European brown bear, is more playful, energetic and aggressive. He enjoys pushing logs, lunging at crows like a dog and crossing large amounts of territory. He lopes around, waits until I’ve run all the way down the steps around the side of the park to get a better glimpse then trots back up again.

I swear, he’s doing that on purpose. Finally I sit down midway on the steps, winded, and hope he’ll pass this way.

Bjork is more ladylike. Born in 2000 in Denmark, she enjoys sitting around, crossing her paws and contemplating life at a leisurely pace. I feel as if she and I have much in common.

She also seems to have an inordinate love for trees.

I still love this tree!

I’m sure Mark and I can learn a lot from the Bern bears and the Bern Bear Park. After all, our new marriage is a bear park sort of thing, our lives now sharing the same corral and all that.

What can you learn from a Bern bear?

Watching the bears of Bern chase each other one minute and give each other their space the next, and seeing how they seem close yet content to let the other be themselves is a good thing to see. And thinking about how maybe fearsome approaches and Winnie-the-Pooh approaches can sometimes intermingle and enhance … and so can different attitudes about sightseeing … yup, I’m sure there are some newly-married-couple lessons in there somewhere, but right now, Mark and I are just going to sit back and watch the bears of the Bern Bear Park play.

And PS – yes, Finn and Bjork are a couple. An em-bear-essingly cute – I mean fearsome – one.

Where is the Bern Old Town: The Old Town of Bern is right outside the train station. Get a map from the Tourist Information Centre at the station.

Where is the Bern Bear Park: The Bern Bear Park is about a 20-minute walk, a stunning stroll that goes directly through the Old Town.For more info on the Bärenpark Bern visit baerenpark-bern.ch.

Leukerbad and hiking the Gemmi Pass

Leukerbad and the Gemmi Pass
Next Post: What to do in Venice