Rafting on the Nith River near Paris, Ontario, can only be done in spring and what a ride it is. Whether you choose to raft the Nith River in spring or the Grand River in summer, Paris-based Grand Experiences near Brantford offers an exhilarating way to try rafting in Ontario and makes a great getaway from Toronto. 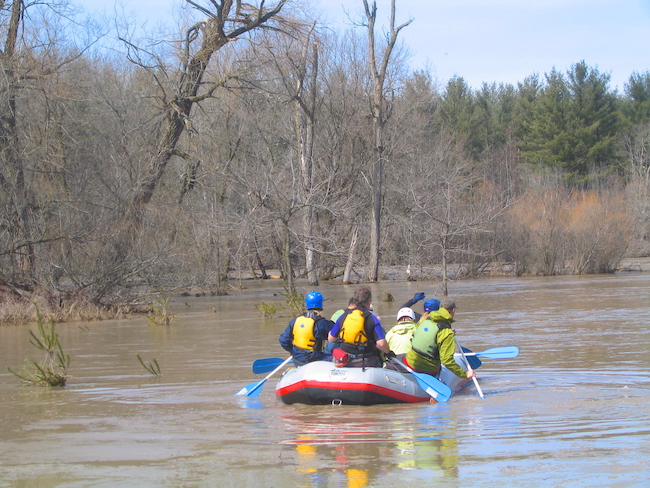 It may seem contrary to get a pedicure before going whitewater rafting on the Nith River, but Ahh…The Spahh in Paris, Ontario, is just around the corner from Grand Experiences, the outdoor adventure company, and I like to put my best foot forward when facing capsizing – literally. According to Jamie Kent, owner of Grand Experiences, if we do flip I’m supposed to point my feet downstream, stay in the middle of the river and wait to be rescued. Best to do that with a French-manicure pink.

The Nith River joins up with the Grand

When people think of rafting in Ontaro, the Ottawa River usually comes to mind. Few have heard of this seasonal alternative, the secluded Nith River in Southern Ontario that joins up with the Grand River in Paris. During the summer the Nith is docile, but in the spring and fall it releases its inner demon. Only an hour west of Toronto, Ontario rafting enthusiasts can tackle a 15-km route with beginner-friendly Class I to III rapids between Canning and Paris.

If the Nith is anything like the Grand, which I’ve been watching obsessively from the window of my B&B, the Asa Wolverton House, I know what to expect. Something cold, fast and melt-water brown, with branches and ice chunks sailing by. 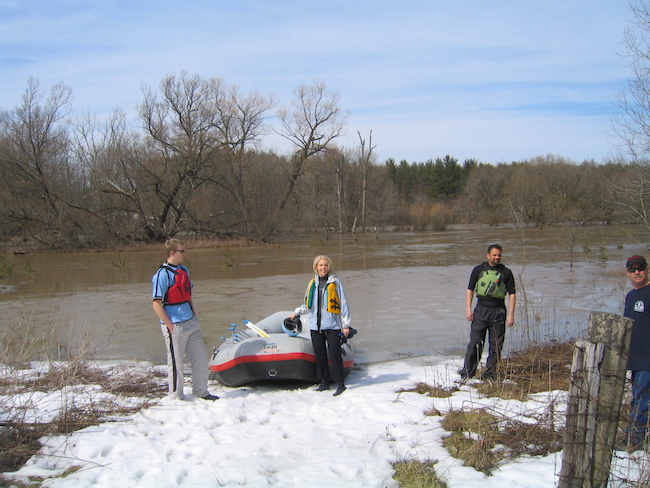 But it’s hard to say no to adventure and the sun is shining, so I’m ready for my first attempt at rafting in Ontario. Geared up in a powder blue helmet, beacon-yellow life jacket and wet suit, I hop in the van to go to the launch site.

The water proves too high to launch in Canning, so we settle for a drive by instead. Formerly Mudge Hollow, Canning is a mere hamlet now, but in the late 1800’s it was a bustling town that harboured a dark secret. Maybe. Local legend has it that Jesse James came here to hide from the law. When the Pinkerton men showed up, ready to blow up his hideout, he’d already fled.

Jessie James isn’t the only legend linked to the Nith, and I like that Grand Experiences brings history into our outdoor adventure. Canning is also the site of the Gretzky family homestead. “Gretzky would have skated on the Nith while visiting his grandfather,” Jamie says.

Our two rafts launch at nearby Puttown Bridge, which, in the pre-green spring, is pretty much a muddy bank with snow at the edge and skinny gray trees behind. I’m in a self-bailing six-seater with four other paddlers and a guide named Will. It feels as if we’re floating over the roof of the world as we paddle past half-submerged trees, a water-logged outhouse and a school bus with water lapping at its wheels.

“This is a field in the summer,” says Will.

Moving steadily, we scan the sky for bald eagles, recently returned to the area, and check out the unique Carolinian forest – dominated by beech and maple but also home to sycamores and rare plants like pawpaw, tulip tree and trout lily. We also pass the point where one of the Grand guides found a fifty-year old skull, which was turned over to the police. A mystery that has never been solved. 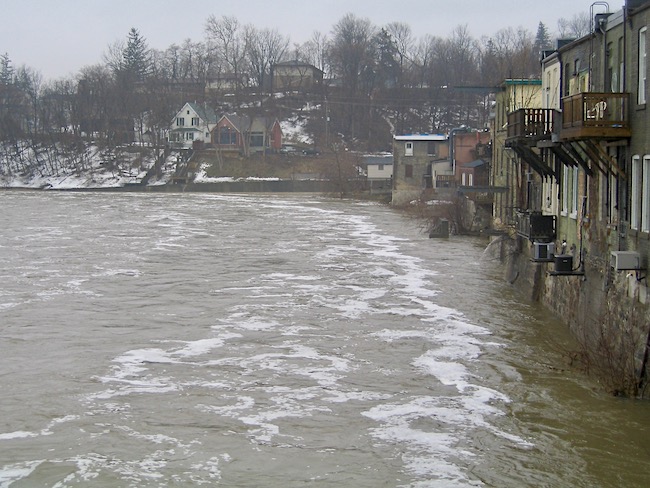 Perched on the edge of the raft, I’m getting into the groove as we pass the whirlpool of Devil’s Cave, but as we round a bend Will suggests I kneel – a two km stretch of white water is approaching.

I have a brief glimpse of roiling foam then we’re in, out and bounding up and down. “We’re heading for a chunk of ice. Watch out!” I yell.

“This is a raft,” says Bass, a guide-in-training beside me. “Not the Titanic.”

Good thing, as I’m not sure the Titanic would survive. At one point we’re vertical. “Paddle hard!” Will says.

We’re heading up another roller coaster wave when a wall of water hits me like an angry bear. Toffee-coloured water torpedoes up my nose. I’m completely submerged. I think I’m airborne, but it’s happening so fast, it’s a blur.

Wild ride on the river

The sunshine reemerges. I wipe the water from my eyes, happy to see I’m still in the raft. “What happened?”

“A wave crested over us,” Bass says.

“Keep paddling!” says Will, from the back.

Oh right. We’re still in whitewater. After that whammy, however, nothing can faze me. I went rafting in Ontario and survived. If I wasn’t soaked and freezing it would be exhilarating. What am I saying? It’s still exhilarating – a grand experience for sure. I just hope my pedicure survived.

Paris, Ontario, in the SpringIf you’re interested in rafting in Ontario then the town of Paris, is known for its shops, scenic main street, cobblestone architecture is a great place to base yourself.Things to do in Paris, Ontario:

Paddle: Grand Experiences offers rafting, kayaking and canoeing. Once spring whitewater rafting is over, the adventures move to the Grand River. For more information visit their website Tel: 1 888 258 0441.

Looking for other great Ontario getaways? Read things to do in Blue Mountain or Viamede Resort, a Kawartha Lakes getaway.