Travelling to London? Want to explore the posh area of Mayfair but don’t know where to start? Believe or not, hip Mayfair in London had a seedy start. Read on to find out where to go and how to explore its galleries, shops, restaurants and its scandalous past.

What? No chauffeur? My life has gone downhill since my first trip to London when I was 15. My father, the late artist William Perehudoff, was having an exhibition at Waddington Galleries on Cork Street in Mayfair and the gallery owner lent us his car and driver for the day. 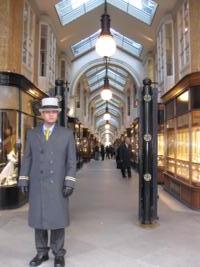 No humming or whistling!

Having a chauffeur was an eye opener for a green prairie girl and I felt like Eliza Doolittle in My Fair Lady – the title, by the way, is said to be a take on the cockney pronunciation of Mayfair lady, Mayfair being one of the most fashionable addresses in town.

But now I’m a sophisticated urbanite and the neighbourhood of Mayfair is no longer intimidating. Since I’m staying at a hotel in the area, the Athenaeum, it’s time to revisit Mayfair to see how far I’ve come.

Roughly bordered by Hyde Park, Oxford Street, Regent Street and Piccadilly, the backstreets of Mayfair are lined with elegant terraced townhouses, and the shopping is legendary: Prince William buys suits on Savile Row, the Prince of Liechtenstein buys art from a dealer on Jermyn Street, and the lingerie shop Rigby & Peller on Conduit Street is the official ‘corsetiere’ to the Queen.

To get my bearings, I take an Old Mayfair tour with London Walks and that’s when I learn that hip Mayfair had a seedy start. It was named for the May Fair, a lewd and raucous festival held each spring at the site of Shepherd’s Market until 1764.

“Sounds wonderful, doesn’t it?” says my silver-haired guide, Graham, as he leads us past the now-gentrified shops.

In contrast, nearby Berkeley Square has been staunchly blueblood since it was laid out by architect William Kent in the mid 1700’s. The surrounding buildings include the childhood home of Winston Churchill and Annabel’s, a private nightclub that was a favourite of Lady Di’s – and one I have no hopes of ever getting into.

It’s late afternoon when I head to the blue chip galleries on Cork Street in the heart of hip Mayfair to drool over the Picassos and Rauschenbergs for sale, then cut through the Burlington Arcade, a historic covered shopping lane where liveried ‘Beadles’ still patrol to make sure there is no humming, whistling or opening of umbrellas.

My goal is to find White Cube Gallery where younger art stars like Damien Hirst and Tracey Emin show. Unfortunately, White Cube proves tricky to get to. Following my map, I squeeze through a narrow passageway and end up in a courtyard with dumpsters. This can’t be right. A woman with a black suit and thin red hair is striding toward me.

“Excuse me,” I ask. “Do you know where White Cube Gallery is?”

I ask her again, but she acts as if I’m a ghost. It takes effort to avoid a person so effectively. She’s putting her heart into it. Maybe she thinks I’m going to hit her up for money. Maybe I should start spouting ‘the rain in Spain’ in a cockney accent.

It turns out I was standing beside White Cube all along, only I’d mistaken it for a parking garage. What’s posh and what’s not around Mayfair can be misleading. My next stop, for example, looks like a typical neighbourhood pub, yet Punchbowl, a pleasant Georgian building with outdoor hanging plants at 41 Farm Street is owned by Madonna’s ex, Guy Ritchie, and sightings of Jude Law have been reported.

Searching for celebrities in Mayfair

Inside Punchbowl, no suave British actors are waiting to greet me and no one else shows the slightest interest in having a chat, so I nurse a half pint of Spitfire under a portrait of Winston Churchill and gear up for my next foray, a sleek-looking nightclub in a Neoclassical building at 7 Burlington Gardens. I’d passed it earlier, caught a glimpse of buff bare-chested men, heard thumping music and pegged it as a celebrity hot spot. If I can get past the doormen, I’ll consider myself arrived.

“Welcome,” says a greeter as I climb the steps.

“Come in!” says a young man with chiselled abs.

“Thanks.” I preen. This is more like it. Obviously, these people recognize me as someone who once rode in a chauffeured car for a day.

Inside the dimly-lit room, another buff male is gyrating on the balcony. Instead of martinis and socialites, however, I see a mother and daughter rifling through a pile of shirts. This isn’t a nightclub, it’s an Abercrombie & Fitch store.

Oh, well, I think, holding a shirt up to a mirror. At least they seem happy to see me.

What to do: Orient yourself on an Old Mayfair walking tour with London Walks www.londonwalks.com

Where to eat in Mayfair: Award-winning Corrigan’s Mayfair at 28 Upper Grosvenor Street offers set lunch menus with wine for about $45. www.corrigansmayfair.com