If you’re looking for an eco-friendly luxury spa resort in Ko Samui, a lush island in southern Thailand, look no further. Here’s a review of the Six Senses Hideaway Samui Spa Resort – a 5-star hideaway in all senses

It’s time for pre-dinner drinks at the Six Senses Hideaway Samui Spa Resort on the popular Thai island of Ko Samui and the stylish 30 to 50ish crowd is congregating. English and Australian accents are floating around, as are women in chic sundresses, and there’s a fair bit of white linen Nehru shirts for the men.

I don’t see any other travellers on their own, but it’s not going to stop me from having a luxe spa vacation in Thailand. I’ve come a long way for this.

I’ve heard good things about the resort’s Six Senses Thai spa, but there is something else going on at the resort that the hotel doesn’t advertise. Most people are here for the hotel’s laid-back tranquility (and with 8 hectares of lush vegetation, a seductive hillside infinity pool, the Six Senses Spa and personal butlers, who can blame them), but it’s the Thai spa resort’s eco-conscious side I’ve come to explore.

“Every piece of wood at the Hideaway Samui is either reclaimed or comes out of a renewable forest,” the hotel manager tells me, sporting a pressed linen Nehru shirt of his own. “Waste water is recycled through a series of natural cleansers like charcoal and sand. We produce our own bio-diesel fuel. Even fruit and vegetable waste is used for a variety of things.”

“Like what?” I ask, aside from feeding pigs I can’t think of many uses for discarded peels.

“Some fruits are used to deter insects.”

Eco action rather than talk

I’m guessing most visitors have no idea how sustainable this 5-star Thai spa resort actually is, as the staff seem to be more interested in implementing green policies than advertising them, but the Six Senses brand, which also owns the award-winning Soneva Fushi in the Maldives, has a lengthy history of environmental action.

Looking at other destinations in Thailand? Check out the best Thai resorts.

Even the Six Senses Spa has a strong eco bent, with an emphasis on touch rather than tech. The resort’s garden grows treatment ingredients like aloe and lemon. And while traditional facials and massage are the most popular treatments, hotel guests can also sample holistic therapies such as numerology, palmistry and life coaching.

The manager advises me to try Sound Healing.

I raise my eyebrows.

“Some people think their bodies are made up of vibrations and that the molecules can be realigned through sound,” he says.

Sound healing seems a bit out there to me, but I’ll consider it. Right now it’s time for my Royal Thai massage. Heading up a path flanked by cashew nut trees, mango trees and orange birds of paradise, I follow the scent of lemongrass to the Six Senses Spa.

In my teak-floored ocean view spa suite, Nes, my Thai therapist, bathes my feet in a petal-strewn basin then begins to twist me into a variety of sailor’s knots.

“Thai Royal Massage would have been done in the palace,” she says, pummelling me happily. “It relaxes the tendons and improves the flexibility of joints and muscles.”

I’m definitely feeling flexible after, not to mention stretched out, kink free and relaxed enough to delve into the spa’s holistic side with Sound Healing, a treatment, according to the menu, that should realign my body’s vibrations with the harmony of the universe.

Tamara, my petite Canadian therapist has light brown hair and a big didgeridoo in her hand (a hollow wooden instrument native to Aboriginal Australia). Before we begin she tells me to decide what I’m seeking. First I opt for grounding. Then I switch and ask for clarity. Then I think of all the other lovely things I’d like to ask for, get confused and go back to grounding. 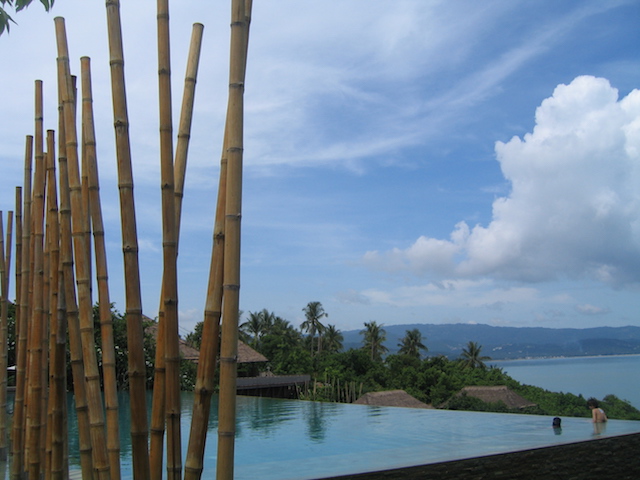 I lie on a mat and close my eyes. Tamara opens my energy lines with a sort of acupressure then begins to play the didgeridoo. The vibrations go right through me, as if I’m hugging a bell.

It’s all going very well until tears start leaking out of my eyes. What gives, I wonder? It’s not as if I’m sad. What’s up with my molecules?

The session ends with the higher frequency sound of Tibetan bowls, leaving me tingling. I do feel calm, and, yes, grounded, and ask Tamara what the tears were about.

“The mind stores emotional energy,” she says, “so even if you can’t remember the memory, it’s still there.

Not anymore. Cleansed to the core I backtrack to the open-air bar where people are sipping drinks as the sun sets over the gulf. It’s all very glamorous and friendly, but on a molecular level, I prefer the resort’s alternative double life.

Getting to Ko Samui – Flights to Ko Samui are easy to take from Bangkok on Bangkok Airways. As an aside, the Ko Samui Airport may be the prettiest airport you’ll ever see.