While the Czech spa towns of Karlovy Vary and Marianske Lazne are larger and more well known, the charming spa town of Frantiscovy Lazne will win you over with its gentle charm, Belle Epoque architecture, healing spa treatments and abundant mineral springs.

Why do I let myself be talked into these things? Of all the spa treatments I’ve tried this is perhaps the most bizarre. But life as a travel blogger and spa reviewer means going beyond pampering facials and Swedish massages. Way beyond. And if I wanted to experience the Czech spa town of Frantiskovy Lazne to the fullest, I needed an open mind.

Gritting my teeth, I stripped off my shirt and stared at the wall as a woman in a lab coat swabbed my back and injected me with gas.

I sat, stunned, until a spa therapist ushered me down the hall for my mud pack. My wellness vacation in the Czech spa town of Frantiskovy Lazne, also knowns as Franzensbad, in the historic spa region of Bohemia, was not quite what I expected. Where was the soft lighting? The whale music? And what was with the gas? 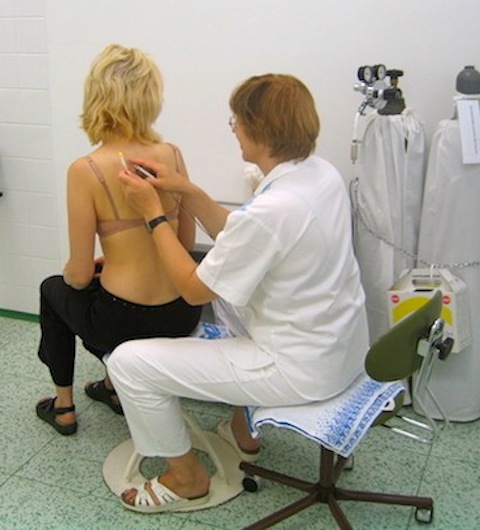 All natural treatments at Frantiskovy Lazne

“It’s over already?” I asked, as she showed me down the hall. I’m not sure what kind of calamitous pain I’d expected, but the fear had been worse than the bite.

The bra-clad Czech and German women waiting behind me burst into laughter. “See? It’s not so bad,” said one. “And it’s worth it.”

Gas injections are supposed to boost circulation. Dr. Nykodýmová, the hotel doctor who gave me my pre-spa checkup in the small but elegant spa town of Frantiskovy Lazne, 200 km west of Prague, said the epidermal shots should ease my tense shoulder muscles as well.

An unusual treatment to be sure, and not one I’m likely to repeat, but at least it wasn’t just any old gas they shot me up with – it’s natural carbon dioxide separated from one of Frantiskovy Lazne’s 24 curative mineral springs. 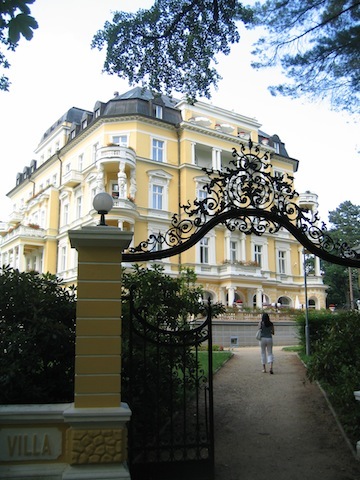 The Hotel Imperial – a grand hotel for a spa

The springs are the reason I came to Frantiskovy Lazne. The mineral springs, while not naturally hot, have plenty of curative properties and are said to be good for muscular-skeletal system, cardiovascular disease and infertility. They’re also good for plain old relaxation, although if I end up with any more gas injections I’m not sure how relaxed I’ll be.

Next up is the mud. And this is potent mud indeed. Containing healing properties of sulfur, iron and pyrite, it’s harvested from a nearby peat bog and ‘cured’ for a length of time in the thermal water of Frantiskovy Lazne. Organic to the extreme.

In fact, most treatments offered in Frantiskovy Lazne’s various clinics and hotels revolve around local natural resources, just as they’ve done since the spa was established in 1793.

While traditional European spa cures are considered to be historical dinosaurs by some, better suited to the golden spa era of the 19th century, their use of native organic products like mud, gas and spring water puts them on the cutting edge of ecological spa trends worldwide. 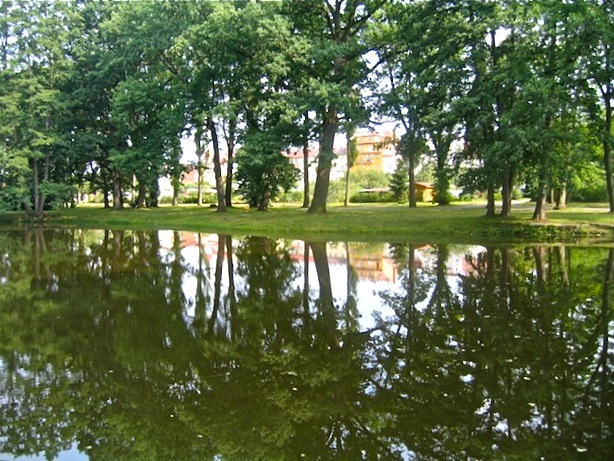 The prettiest town you’ll ever get a gas injection in

In a white antiseptic treatment room – Czech spas are more medically-oriented than North American ones – a blond therapist dumped a bucket of mud on a bed. Rich as a brownie, with a faint earthy aroma, the aged peat was so thick it stayed in the shape of the pail. The therapist spread it out, lay me down, and covered me in a tarp. Twenty minutes later, she hosed me off in the shower.

There is no room for modesty when you’re doing the ‘cure.’

And curing and rejuvenation are what Frantiskovy Lazne is all about. With its graceful colonnades, pavilions, parks and yellow neoclassical buildings, it’s knee-deep in romantic spa architecture, though only a tiny cousin to the larger Bohemian spa towns of Karlovy Vary and Mariánské Lázně.

Read more about spa towns in the Czech Republic 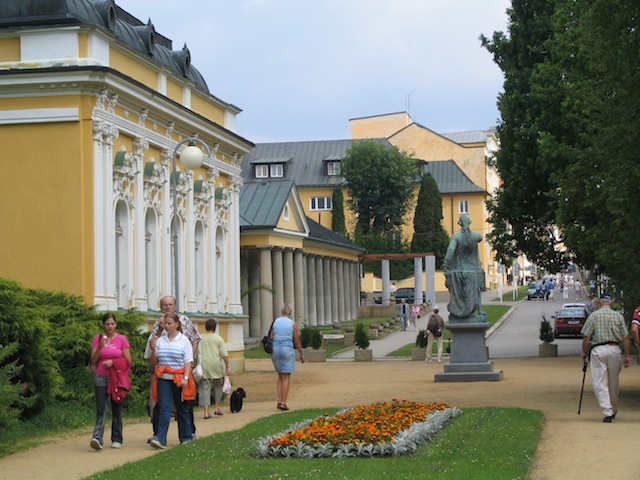 Strolling along looking for mineral water

Other spas might be bigger but Frantiskovy Lazne has its admirers. The Dutch couple in the room next to mine considered it the best in the Czech Republic. And it has had a number of elite guests. Goethe, a spa fanatic, passed through town a whopping 33 times. Beethoven, however, during his 30-day cure was bored.

Not me. Boredom is bliss when you’re a tired-out traveller, especially if you’re only here for three days like I am, a mere nano-second in spa curative time (three to four weeks is recommended). As a solo destination for women Frantiskovy Lazne is ideal, as many people come here alone, but single women beware, it’s renowned for its fertility cures.

Watch what you rub

Don’t, above all, rub the private bits and the nose on the little statue of František in the main park, or you won’t stay solo for long – it’s rumoured that this will bring you children.

Other than rubbing the statue (or avoiding it at all costs), the main action in town comes from searching out and sampling the various mineral springs – it’s a pub crawl for health fanatics. Plastic cup in hand, I wandered through leafy parks, trying the various fountains with indiscriminate enthusiasm.

On the hunt for salty Glauber IV

Inside a domed colonnade housing the František Spring, a white-coated attendant filled my cup. I sipped, watching people come and go, mainly retired Germans who’ve hopped over the nearby border. At the Glauber Spring Hall, I tried the Glauber IV water and nearly gagged. It’s officially the saltiest mineral water in the world.

Anything this horrible must be healthy, I thought, so I bolted down a couple of cups, then tried Glauber III. It wasn’t until later when my stomach was twinging that I learned Glauber IV is known for its purgative effects, and that it’s important to consult a physician before embarking on a drinking cure. 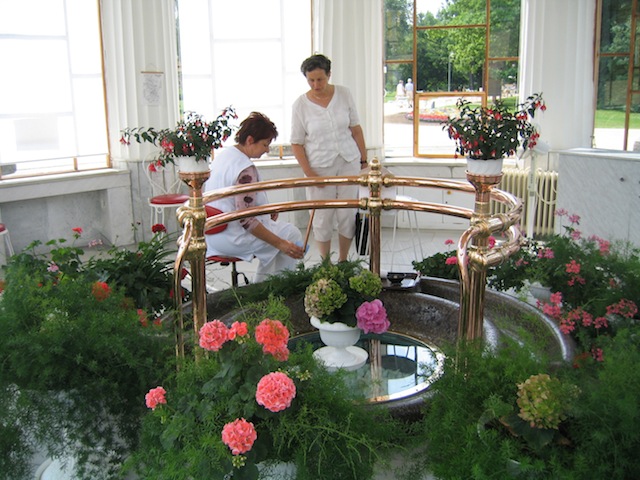 Drinking my way through Frantiskovy Lazne

As I walked back to my hotel with my stomach sloshing from side to side, I consoled myself with the fact that at least I didn’t drink 50 to 70 glasses, as they were known to do in the early 1800s. At that time spa cures were based on the idea that illness was caused by poisonous fluids in the body rather than by individual organ problems. The drinking cure was meant to bind and flush out these poisons.

Spas have come a long way

Today, medical science has progressed, but the philosophy sounds strangely familiar. Who hasn’t been told to drink more water to rid the body of toxins? By dipping into the spa traditions of the past we just might be tapping into the cures of the future – and we can all drink to that.

Spa packages in Frantiskovy Lazne can be arranged through Spa Franzensbad JSC at www.franzensbad.cz or Tel: 011 420 354 201 111. Three days at the 4-star Hotel Imperial include meals and spa treatments. Prices vary depending on time of year.