Travelling to southeast Ireland? Combine sightseeing with some of the best spas in Ireland for a renewing tour of the sunniest region in the Irish Republic.

And scroll down to the bottom of this blog post check out Wandering Carol’s Spas of Ireland travel video below!

When it comes to Irish spas, go the other way

While busloads of tourists stream west to the Ring of Kerry and the Dingle Peninsula, why not go where savvy locals vacation? Southeast Ireland has plenty of visit-worthy attractions, from beaches and ancient history to sophisticated resorts and some of the very best spas in Ireland.

Monart Spa in County Wexford is my top choice for a destination spa in Ireland. FYI: A destination spa is one that has a full focus on spa, with spa and wellness being the main reason to go.

Where is Monart Spa?

Located 130 kilometres south of Dublin, the adult-only Monart Spa is an idyllic haven in a woodland setting. Behind the Georgian heritage manor house, a modern addition of glass and wood brings the gardens indoors and takes the spa outside.

Fun unexpected pops of colour and design are everywhere, like a fuchsia settee or life-sized metal horse.

The Monart is a true destination spa, which means that no one will look twice if you wear your robe to breakfast. The heart of the spa is the thermal suite that contains various water therapies such as a steam room, indoor jet pool and salt grotto. Outside, a wooden sauna cabin is piping hot and the adjacent icy bucket shower offers a bracing — make that shocking — way to cool down.

Treat yourself: For a true touch of Ireland opt for a treatment with Voya products, an organic line that uses hand-harvested seaweed from Sligo. A Tangle Me Up Body Wrap will help detox and fight cellulite.

Go on, try it: The Celts believed that willow groves were healing places. Walk the Monart’s living willow labyrinth to slow down and shed that hectic city vibe.

Free Perk at Monart Spa: Flag down a therapist in the thermal suite for a free mini-foot massage.

Not far from the Monart Spa is the 13th century Enniscorthy Castle on Castle Hill in Enniscorthy town. Worth a stop.

Dunbrody Famine Ship: You’ll appreciate the luxury amenities of Monart Spa even more if you tour the Dunbrody Famine Ship in New Ross, an evocative reconstruction of a 19th-century Quebec-built ship that carried passengers on the gruelling journey to America during Ireland’s potato famine.
Don’t miss the multi-million dollar Irish Emigration History Centre.

Built right into the rock, the seductive 39-room Relais & Chateau property, The Cliff House Hotel, is known for its sea views and cuisine (it has the only Michelin-starred restaurant outside of Dublin) but don’t discount the Cliff House’s Well Spa.

The Well Spa has just three treatment rooms but offers topnotch therapists and big time facilities including an indoor pool and outdoor Jacuzzi. 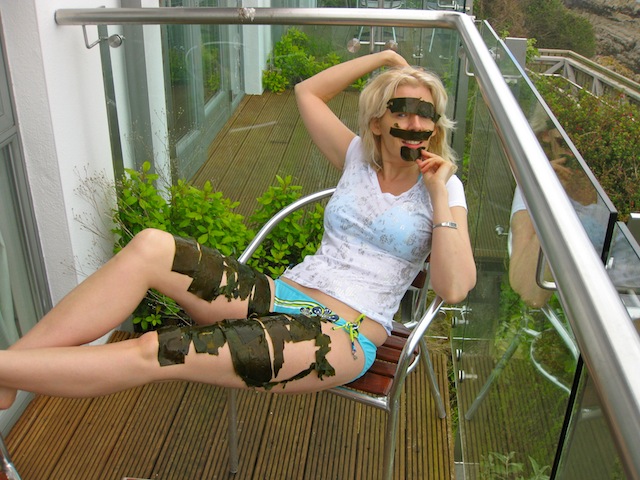 Treat yourself: For a novel — and romantic — way to soak up the scene, try the spa’s new outdoor side-by-side soaker tubs. Set on a private deck, these baths-with-a-view come in three healing varieties: seaweed, peat or salt. I loved this tranquil treatment.

Go on, try it: As the sun sets, take a plunge in the chilly rock pool at the base of the Cliff House. An bracing Irish experience you won’t forget. I’m still not over the shock.

You don’t need to go far. Check out the historic town of Ardmore where the Cliff House is located. This well kept town was Ireland’s first Christian settlement and stems back to St Declan who predates even St Patrick.

Don’t miss the breathtaking Cliff Walk, which takes you past St Declan’s ancient well, believed to have curative powers, and along Ardmore Bay.

After your stay at the Cliff House in Ardmore keep heading south to Fota Island. Set on a small island in Cork Harbour, Fota Island Resort is a large property with a championship golf course. The elegant lobby is manor-house tweedy and the spa has an extensive hydrotherapy area, indoor pool and gym.

Bonus: The spa and pool area is popular with a local clientele who always seem up for a chat.

Treat yourself: Follow a Detoxing Green Tea Hydrotherapy Bath with a steaming Wrap of Milk and Honey to nourish and moisturize. The key to the wrap’s success is the heated waterbed-like treatment tub that gets you sweating.

Go on, try it: Experience the Emerald Isle at its best. Get a trail map from the concierge and stroll through a lush forest filled with moss-covered trees and blooms as big as leprechaun heads.

The city of Cork is just 20 km away — don’t miss the English Market where Queen Elizabeth II did a groundbreaking walkabout – a symbolic gesture of peace.

Travel tips for your Best Spas in Ireland tour:

Stopping in Dublin? Check out the spa at the luxury Shelbourne Hotel.