I’m an extreme spa junkie but the death of Vladimir Ladyzhenskiy, a 60-something amateur wrestler, at the World Sauna Championships over the weekend, made me stop and think: when does wellness stop being healthy and start being deadly?

A finalist in the competition, Ladyzhenskiy collapsed after six minutes in the extreme 110C heat and authorities pulled both him and the reigning champ, Timo Kaukonen from Finland, out of the wooden sauna. Both had severe burns and were bleeding. Uggggh. Horrible horrible horrible. It was to have been the final round in the competition, but for the Russian Ladyzhenskiy, it really was the final round. As final as  final gets.

While I’ve never had much sauna tolerance, I had sauna nostril-burn! It happened this summer in France. After I spent some time in a sauna breathing – I mean, how do you avoid breathing? – the inside of my nose was sore for a couple of days and it even scabbed. It’s weird … I thought that because a sauna was healthy it must be safe to breathe in the air, even though I remember it feeling hot and stinging. Lesson Number One: just because something has a rep for being a wellness treatment doesn’t mean it’s without risks. Lesson Two: No deep breathing in the sauna even if you somehow misguidedly think you are doing heat therapy for your sinuses. 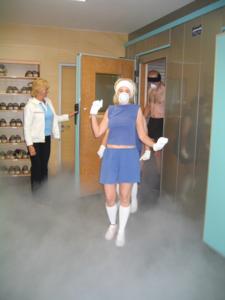 The whole sauna championship disaster makes me think of the extreme spa treatments I’ve done. Cryotherapy – ie spending a couple of minutes in a minus 160C chamber, was probably the craziest. But I wasn’t trying to stay in too long. In fact I was very aware that after 8 minutes I’d be disoriented and somewhere around ten I would die. But a sauna? Who thinks of that in those terms?

I’ve also tried gas injections in the Czech Republic. “Getting a shot of carbon dioxide in the back is good for pain relief,” my therapist said. So I signed up, even though I had no pain in my back. Mostly I was curious. When they tried to inject it into my knees, however, I balked. No more gas injections for me.

While I have a high tolerance for crazy and insane spa treatments, I think I still know my limits. I would try a placenta facial or a bird poop facial. And I would definitely ingest the fetal cells of a black sheep at Clinique La Prairie in Switzerland if I had 20,000 bucks. I’ve tried horse therapy and I’ve irrigated my gums with hot spring (thermal water) – all in the name of wellness. But there is one treatment I won’t do. Leech therapy(even though Demi Moore did it in Austria) is where I draw the line. In fact, when I think about it, I’d rather have a needle in the knee.