The cycle of life

So my boyfriend, Mark, was driving us to East Caledon to cycle the Caledon Trailway. Let me say right here, I’m no Lance Armstrong. I’m not even Lance Armstrong’s left arm. I’ve cycled twice in the last 7 months. Once was Friday – we cycled Toronto’s Leslie Spit, and the second time was Saturday when we cycled the Beltline.

But it was a gorgeous Sunday and we wanted to try something in the country, so Mark came up with the idea of the Caledon Trailway, about 40 minutes north of Toronto.

While we were driving, we were discussing my mother, artist Dorothy Knowles, and her upcoming art show at the McMichael Canadian Art Collection in Kleinberg, Ontario. Both my sisters and my mom will be coming down for the opening so Mark has been co-opted into driving us from Toronto to Kleinberg … if we can all fit into his gently-faded Saab.

“My sisters and I can fit into the back seat,” I said brightly. “We’re tiny.”

Major pause while I shot poisonous eye-darts at him. “Have you learned nothing in two years of dating?” I asked.

“I just meant that you’re tall,” he back pedalled quickly. “Your legs might get cramped.”

Really, not the best way to start our cycling trip.

Then we stopped at a cafe en route for burgers. The woman who took our order seemed harassed. “What do you want on your burgers?” she asked.

“Mayo, mustard and any vegetably thing you have,” I said. Small pause while woman shot eye-daggers at me and rolled her eyes. Really, I was just trying to save her some time.  “Tomaaato,” I said slowly. “Lettuuuce and Oniooons.”

“You seem to be having a busy day,” Mark said to her.

“It’s been hard,” she said. “One of the staff just walked off. She said she was having a bad feeling and left.”

“Ohhh,” I said, making sympathy noises and remembering that I should be a kinder person. She wasn’t being rude, she was having a bad day. I can learn something from this, I thought, heading outside to sit on the patio. I should be more like Mark.

15 minutes later I headed back in, wondering where the burgers were. The woman ignored me, but a nice man with a cook’s apron said, “They’re not average burgers. They’re the size of a shoe! They take some time to cook. I’ll bring them out when they’re done.”

“Okay.” I sat happily on the patio, then Mark eventually got up. “I’m going to see where the burgers are.”

“The man said he’d bring them out.”

“Okay.” Mark went off and I started daydreaming about the glorious days of upcoming summer. Vaguely in the background I heard, “Cheeseburger? Cheeseburger?” but I knew Mark was inside so I ignored it.

“Oh! Right! That’s me!” I sat up and saw the woman holding two platters.

“Can you come and GET IT PLEASE?” she said in that tone of voice that tells you have done something very wrong, like not cleaned your room when you are ten years old.

“Yes, I can,” I said. Just as soon as I put my shoes back on. I collected the platters just as Mark came sauntering back. “I thought you were getting the burgers.”

“I was, but they weren’t ready so I was talking to two cyclists who’ve ridden the Caledon Trail. You can go either way from Caledon East but they said that the west direction is the most scenic. The trail goes up an elevated bridge so you can look out over the highway. And there’s good ice cream in Inglewood.”

Sounded good to me. After the burgers, after locating the trail head and getting our bikes out of the car (really, if we can fit two bikes into the back of the Saab you wouldn’t think I’d be too big to fit in) we hit the trail. It’s  a gorgeous Rails-to-Trails (railway lines that have been converted to trails) track that passes fields, streams and beaver dams. After about 7 km, I finally thought to ask: “How far is Inglewood?”

“So we’re almost there?”

No, about 7 km past that sign we saw awhile ago. Maybe another 3.”

“So we’ve only gone a third of the way?”

“I don’t think I can make it.” Normally I think I could have made it, but I’d borrowed one of those bikes with low handles bars and it was straining my back.

“Well, we’ll stop at the next intersection and you can see how you feel,” Mark said.

And at the next intersection he told me we were almost there, and then that there were some buildings in the distance so we must have arrived, and I can’t remember all his reasons why I simply must continue on, but somehow I was talked into continuing on all the way to Inglewood.

And then we got to Inglewood and the store was closed. “Why didn’t that woman tell you the store closed at 4?” I said. “I’ll tell you why, because early bird people never have this problem!” I mean, I’m all for outdoor experiences, I really am, but it was a long way to go for no ice cream.

I would have said more, but I was too tired. Even my fingers were sore from trying to ride with my finger tips on the handlebars so that I could straighten up my back. Ten minutes after turning around we came over a wooden bridge that crossed a stream.

“Here we go,” I said. We went down to the bank, laid out a blanket and collapsed. The sun was warm, the late afternoon shadows brought out the colours of the red bushes and green stream and frogs were conducting an off-tune punk rock jamboree.

Now this was more like it. “I wish tomorrow were a holiday, too,” I said, lying flat with my arms out. 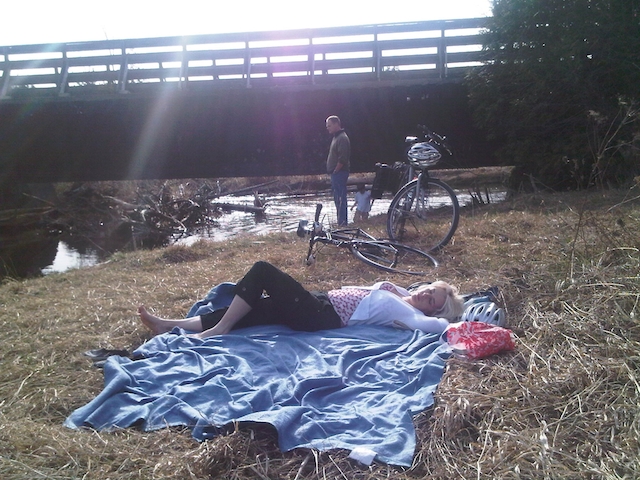 “No,” I said. “I was thinking it would be nice to come back tomorrow and do the trail the other way.”