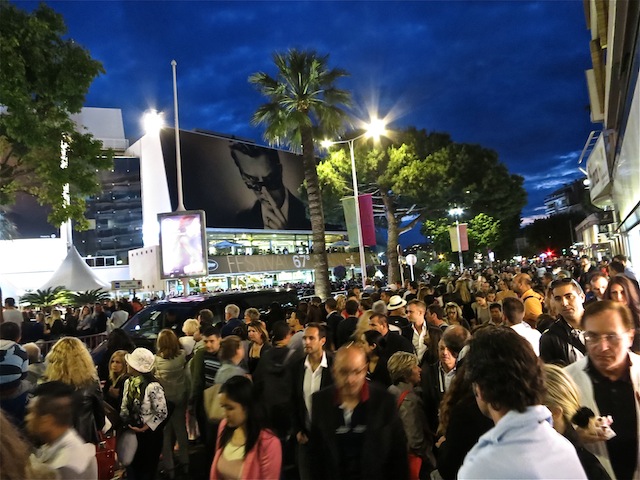 Thanks, Quentin Tarantino: a Cannes blog

Thanks, Quentin Tarantino. Because of you I missed the Canadian film, Mommy, at Cannes. Okay, it wasn’t all your fault, but you and your press conference are largely to blame.

Why Quentin Tarantino is to blame

I caught the train into Cannes from Nice, where I’ve rented an apartment. When I arrived I raced to Bazin Theatre in the Palais, which is where my outdated program said the Canadian movie Mommy was playing (either that or I read the program wrong, stranger things have happened. UPDATE: I read it wrong).

Since Mommy clearly wasn’t at Bazin, I raced to the Information Desk, grabbed a new daily program and asked, “How do I get to Theatre Soixantième?”

“Go downstairs to Level Zero, and blah blah blah.” (When I ask directions I only ever listen to the first part due to a short attention span.)

On Level Zero I asked a security man where to go. “Go up to 3rd floor and take the walkway.”

Putain! Swearing inside my head (and maybe partially out loud, because I really wanted to see at least one Canadian film), I raced for the elevator. On third floor I asked a security man for directions. “You need to go to Level Zero.”

“I just came from there!”

“Well the walkway here is closed because Quentin Tarantino is coming this way for his press conference. But you can try.”

A group of men in suits stopped me at the walkway. “Sorry, Quentin Tarantino is on his way.”

I briefly considered forgetting about Mommy so I could photograph Quentin Tarantino, and was Uma Thurman going to be there, too? They’re both here in Cannes to celebrate the 20th anniversary of Pulp Fiction. But then I found two other people hurrying to Theatre Soixantième and followed them as they seemed to know the way.

When I finally got to the right theatre, the security woman was flapping her arms, “Sorry, it’s finished. Full.”

I am a Cannes loser but learned something

So it’s now official. I have missed all three Canadian movies at Cannes and learned that a close brush with a famous person such as Quentin Tarantino isn’t always for the best.

In other news, because you’re probably getting tired of a blog about never getting into a competition film, and never actually seeing a famous person, I’ve decided to show a video of Kristen Stewart on the runway last night for Clouds of Sils Maria – a film in which she’s said to be an Oscar contender. (Take that Twilight haters!)

Of course the big news is that Kristen Stewart wore white glittery Chanel pants! (And then took off her Louboutins in the theatre! And looked really uncomfortable on the red carpet because she hates fame! And that’s why I love her! Rob, you should totally take her back!)

And because I know you’re wondering, I’ll tell you now. Rob Pattinson was here in Cannes but left before Kristen arrived so they didn’t reconcile. Yet. But Pattinson did meet up with his friend Kellan Lutz.

And Justin Bieber totally seemed happy to see Victoria Secret model Barbara Palvin so I don’t know what’s going on with him and Selena Gomez … okay, sorry. Let’s get back to Cannes!

This is what happened next in Cannes!

Later that evening I stood outside the Palais where Kristen Stewart would be walking up the red carpet (after Quentin Tarantino and Uma Thurman) but then my feet hurt so I took the train back to Nice and sat in my apartment and ate cookies.

Considering that this is the view from my apartment, it’s not as sad as it sounds – although, two thirds of a box of cookies later, I accept that it’s a little sad.

The Cannes Film Festival is winding up and some awards have already been given out (but not the Palme d’Or yet). The Ecumenical Jury gave top prize to Timbuktu (yes, yes, it’s a film I didn’t get into).

And the Cannes Fipresci (International Federation of Film Critics) award went to Winter Sleep (yes, yes it’s a film I didn’t get … whatever).

I saw a movie!

But breaking news here, folks, I actually SAW the film that won the Un Certain Regard award, which went to White God, a Hungarian film directed by Kornel Mundruczo about a young girl who loves her dog and how the dog becomes the leader of an angry hoard of escaped ‘shelter’ dogs, which, to quote the movie, don’t act like a band of strays but ‘a well-organized army.’

Hahaha. Sorry I shouldn’t laugh, but it’s true – it was a dog army movie, and the reason I finally saw an award-winning film at the Cannes Film Festival is because after I couldn’t get into Mommy (because of Quentin Tarantino), I went to Theatre Debussy and got into White God instead.

So thanks, Quentin Tarantino. I owe you one

And now the moral of the story is clear, a close brush with a famous person such as Quentin Tarantino is always for the best.

A luxury evening in Cannes

Read more on the sexy South of France: Visit my travel blog post Things to do in the South of France for plenty of ideas on where to go, why to go and what to do there.

A luxury evening in Cannes
Next Post: South of France train, in which a man pulls a gun on me