Bangkok is a great place to indulge in spa treatments. From budget to luxury, there are plenty of spa options. Here’s my blog review of the Mandara Spa in Bangkok at the Royal Orchid Sheraton hotel.

The River of Kings, the Chao Phraya, is an endlessly captivating artery of Bangkok, and in this bustling Asian city where traffic and noise are constants, staying or taking a spa break along the Chao Phraya River is a relaxing respite. 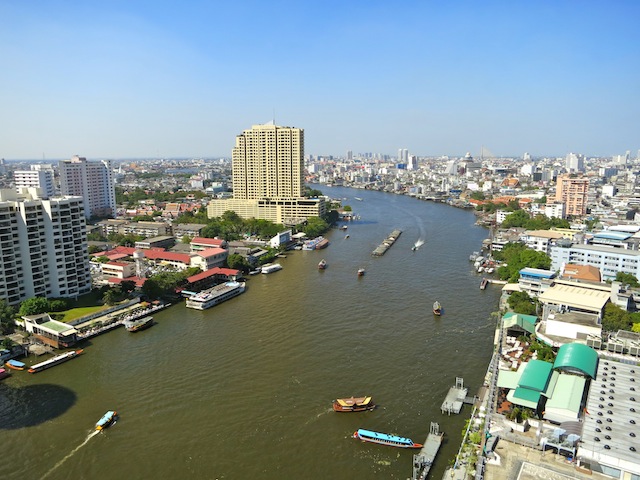 A calm view in Bangkok

Mandara Spa in Bangkok on the Chao Phraya River

Capitalizing on its riverside location is the Mandara Spa at the Royal Orchid Sheraton Hotel and Towers Bangkok. In fact, the views from my treatment room were so stunning it was a shame to close my eyes during my Balinese Massage.

There are a variety of suites and treatment rooms at the 3rd-floor spa, as well as a small garden area for relaxing and a pavilion for outdoor massage. If only they would put an outdoor whirlpool and cold plunge pool out there, it would raise the spa into the stratosphere! 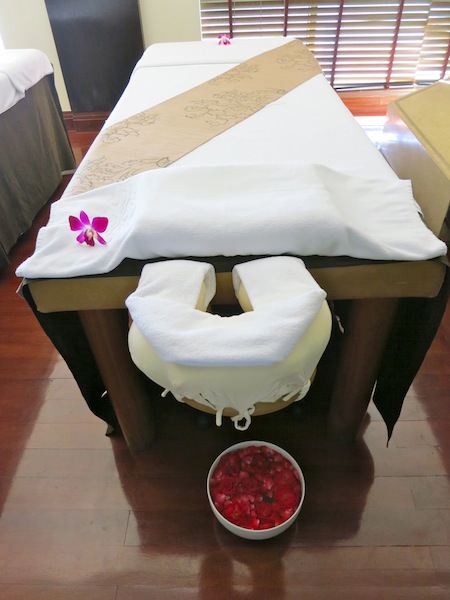 Even so, it’s lovely – traditional and serene, with rich wood floors, clean lines and traditional touches such as wall carvings and lots of fresh flowers.

If you can book a couples suite, do it. There is a suite in the garden, which I couldn’t view because it was booked, and but the one I had my massage in was serenity itself.

The large suite had a petal-strewn aromatherapy whirlpool bath at one end and a wooden platform on the other, where my treatment began with a milk and honey footbath and lavender foot scrub. 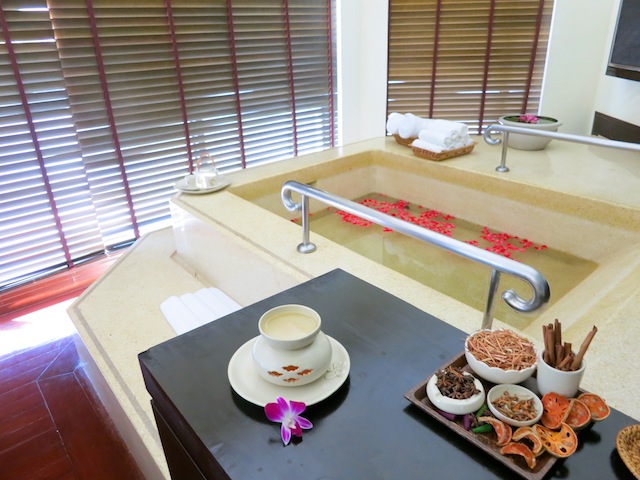 Good for one or two

Treatments at Mandara Spa in Bangkok

The Balinese Massage is a soothing treatment that combines Indonesian floral oils with some stretching and a medium palm pressure that create ‘waves of relaxation.’

It seemed like a fitting treatment – now a worldwide chain, Mandara Spas began in Bali, an island known for its spirituality and healing traditions – and the steady pressure helped relax all the muscles in my back that were knotted up from the long flight, make that flights, to Bangkok. 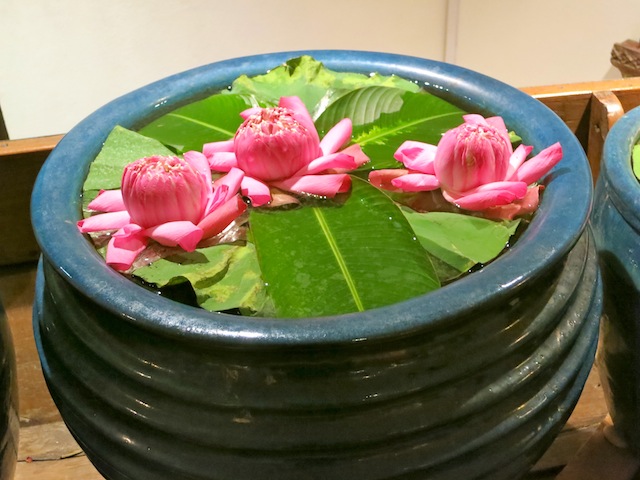 It’s a mix of Western and Eastern therapies, with everything from an Elemis Body Sculpting Cellulite and Colon Therapy to a Ritual of Javanese Lulur. There are also service treatments like waxing and manicures, as well as an Aloe Poultice treatment if you should burn after lying out by the pool too long.

About the Royal Orchid Sheraton Hotel

There are two pools at the hotel, a curvy one in the lush garden grounds and a saltwater Terrace Pool that looks out over the river. There is also a 24-hour fitness center and a sauna.

The Royal Orchid Sheraton Hotel & Towers has 726 rooms. A bridge links it to the River City Shopping Complex and a free boat shuttle leaves from the hotel pier to the Taksin Skytrain Station.

Hotel restaurants and bars include the Italian Giorgio’s, Thara Thong for Thai cuisine, a lobby lounge and Sambal, a riverside bar and grill. Don’t miss the breakfast buffet on the terrace.

Location of Royal Orchid Sheraton Hotel and Spa in Bangkok