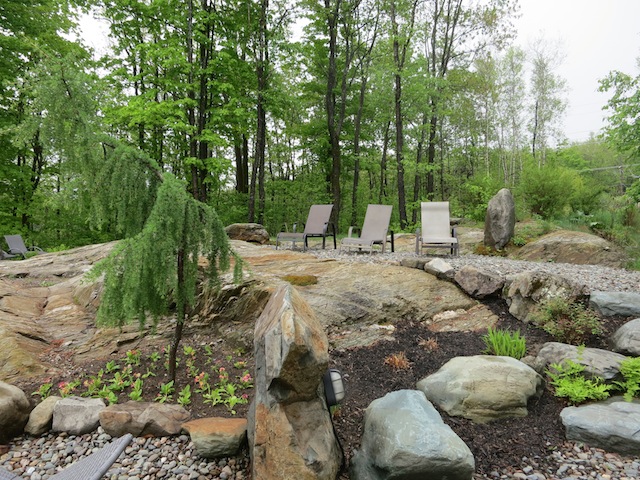 Sound Oasis to sleep by

“Okay, which one is this one?” I lean back against a stack of pillows  at Spa Eastman in the Eastern Townships of Quebec. Outside, beyond the wooden deck an ominous sky looms and grey mist hovers over the lake. I press a button on my clock and the soft sounds of chirps and twitters floats through the room.

“Not even close. It’s North Woods. Now try this. You’ll never guess this one.”

I press the button again. No, this is not a game of Name that Tune. It’s how to have fun with your Sound Oasis alarm clock, a  Travel Therapy System that comes with 18 different sounds – perfect for my trip to Spa Eastman.

As a travel writer I get offered a lot of swag, and I always turn it down, mostly because I’m too lazy to respond. But when a press release came my way about the Sound Oasis Travel, temping me with tantalizing visions of a decent night’s sleep, I leapt at the chance.

Because I, dear readers, am an insomniac. A terrible sleeper. Even with – wait for it – ear plugs, a T-shirt over my head and a loud ratchety air conditioner at home that I run even in winter to drown out outside noise, I still have problems sleeping – unlike Mark, who is a sleeper extraordinaire, and doesn’t seem nearly as excited about trying out the Sound Oasis Travel Therapy System as I am.

And while I’m trying to be tranquil at Spa Eastman a good night’s sleep is necessary.

This trip to Spa Eastman is my first chance to try the clock, and I’m finding it offers no end of fun. As we loll around reading, I set it to Asian Garden. Considering we’re at a wellness retreat without TV or sound system, this is as wild and nightlife-y as it’s going to get. But it’s all just lead up to the Big Sleep, the night that will offer me the best sleep ever! At least that’s what I hope.

We turn the lights off and I set the clock to Harbour Swell. I flop on my side. flail around and sit up. I switch the clock to Cooling Fan then try Rainforest and then Ocean Surf. I push the covers on and off. It’s not until I find Thunderstorm that I’m lulled to sleep.

At one point Mark gets up and looks outside. The storm that’s been threatening all day is crashing down. Lightening flashes and thunder cracks. “It’s exciting,” he says. He loves storms and I know he’s angling to sleep with the patio doors open.

“I’m not turning off my clock,” I say defensively. I’ve finally found Thunderstorm and I’m not giving it up.

“But you could be listening to a real storm,” he says.

“It’s not the same.” Doesn’t he understand? A real storm is like a brief affair, all drama and passion. But all too soon Real Storm will leave and I’ll be left in the lurch. Soundless. Abandoned. But Clock Thunderstorm will stay by my side. It’s our first night together, but I know it’s meant to be. Clock Thunderstorm stays, the two storms rage side by side and I go back to sleep.

Sound Oasis didn’t cure my insomnia, but it’s a comfort in the night, and will be excellent for drowning out pesky hotel noises such as people talking in the halls or bills shoved under your doorway. I say ‘will be’ rather than ‘was’ because Spa Eastman was so quiet that I didn’t get to test that part out.

Sound Oasis Travel Therapy System combines a high performance sound therapy digital system with a full-featured travel/alarm clock. Powered by 4 “AA” batteries or included AC adapter, it’s ideal for use while traveling. Retails for $89.99, it can be purchased online at sound-oasis.com, via phone at 1-866-625-3218 or at retailers throughout North America.

Watrous stained glass secrets
Next Post: Getting a travel column