The Sonoran Desert in Arizona is hot but there’s a good way to keep cool. Salt River kayaking. This half day kayak tour near Scottsdale and Phoenix on the Lower Salt River is a smooth ride through through Tonto National Forest. It’s also super fun. I went with Arizona Outback Adventures. Here’s what to expect if you go. 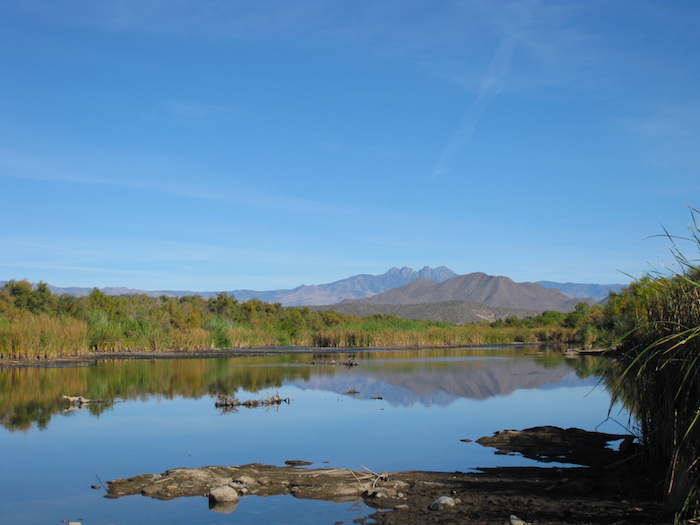 A kayak adventure on the lower Salt River

The guides at Arizona Outback Adventures were said to be uber hot, but that’s not why I arranged to go kayaking down the Salt River. It was the mystique of the desert river that appealed to me: think the Nile, the Colorado and, on a more modest scale, the Salt River of the Sonoran Desert.

History of the Salt River

Originating up on the Mogollon Rim, the 320 km Salt River was first harnessed by the Hohokam people. They built the largest series of irrigation ditches in prehistoric North America before mysteriously vanishing in the 15th century. Four centuries later, an adventurer named Jack Swilling came upon the deserted canal system and had the idea to found an agricultural industry based on hay and pumpkins, thus Pumpkinville (later Phoenix) was born.

Swilling died in prison, a charge of stagecoach robbery over his head, yet the legacy of the canals lives on. Scottsdale’s liquid centre, the Arizona Canal, is a descendant of this early irrigation system, though with a $3 billion downtown waterfront development of restaurants, condos and retail including Fashion Square, the largest mall in the Southwest, I doubt Swilling would recognize it today. 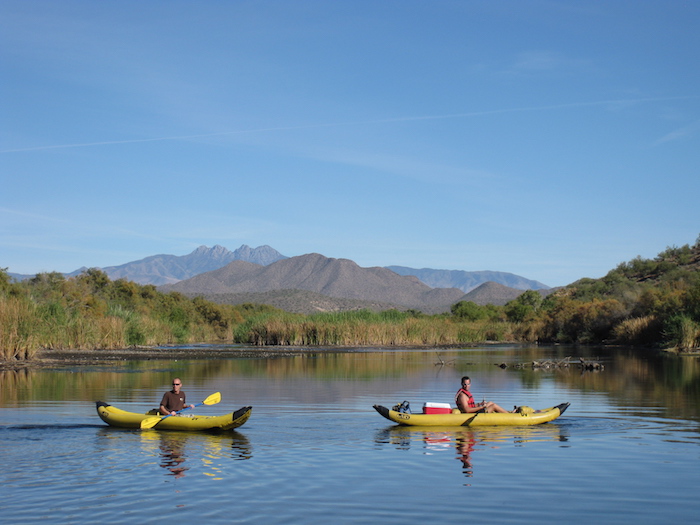 My Canadian-born guide, Seth, was lean, tanned and somehow managed to look elegant in his outdoor gear, while I, winter pale and tired from a morning flight, felt like a polar bear stuffed into a bikini.

But who was complaining? It was storming in Toronto when I left. Barely five hours later I was on a rocky bank of the Lower Salt in Tonto National Forest surrounded by a desert full of saguaro cacti and sage brush.

Start at the Verde River

We launched our yellow inflatable kayaks at the point where the Verde River flows into the Salt. Having a flatter bottom than a regular kayak (the inflatable kayak, not me) makes them harder to tip in whitewater. This was good because the wildest part of our Salt River kayaking tour was right at the start.

Wild being a relative term. While rapids on the Upper Salt reach class III and IV during rafting season in spring, down here it’s a bubble bath.

It was still exciting because inflatable kayaks turn easily. So easily that until I got the hang of it it was like being on one of those twirling teacup rides at an amusement park. Once we’d shot the ripples, I power paddled until it was clear that even without lifting a finger I was going to travel downstream. Kayaking on the lower Salt River isn’t exactly an extreme adventure, but if you’re looking for an outdoor excursion near Scottsdale or Phoenix it’s a fun way to get out and connect with an incredible landscape.

Looking out for bald eagles, I drifted by mesquite trees draped in mistletoe. As we curved around Red Mountain, a sacred site to both the local Pima and Yavapai people, a Great Blue Heron circled up with a series of prehistoric cries. 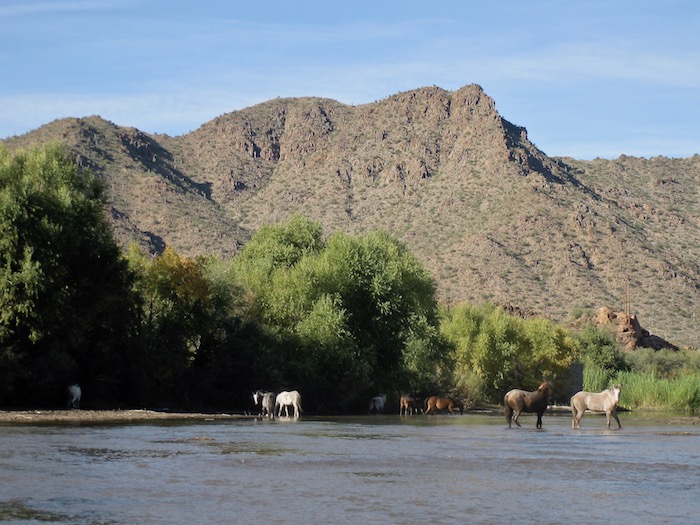 Wild horses on the Salt River

I whipped my head around.  Standing in the water was a herd of wild horses, descendants of those brought over by early Spanish explorers. It was a supreme Wild West moment and I wondered if Jack Swilling ever looked on the same sight. We’re within 15 metres of the herd when the two horses nearest jerked up their heads and took a few steps toward us. It occurred to me there were 12 of them, two of us, and that they were bigger than we were.

“They’re just trying to get a better sniff of us – to see what we’re up to,” Seth whispered.

Suddenly the horses bolted, raising splash and spray as they raced across the river. I thought the excitement is over but while Seth is looking up, pointing out a kingfisher, my bikini top fell down. Never will I complain about wearing an unflattering, yet body-covering, life jacket again.  Reaching around, I discreetly refastened my top just as we were ready to disembark.

Climbing out of the kayak I peeled off my life jacket. Instead of slipping free it flapped off my back like an oversized water wing.

“What the?” My face turned red as I realize I’d managed the impossible. I’d fastened my bikini to my lifejacket.

“This is a first,” Seth said, managing to extricate me after an embarrassing few moments.

It wasn’t a triumphant finish, but it could have been worse. The Hohokum mysteriously vanished. Jack Swilling died in jail. At least my Salt River downfall involved only my top.

A Salt River kayak tour with AOA is suitable for beginners, families and those who want to experience the amazing flora and fauna of Arizona. This is a guided kayak tour that takes place on the Lower Salt River near Phoenix and Scottsdale. You’ll be paddling your own kayak while a guide tells you about the history, wildlife and landscape of the Sonoran Desert. You’ll also be given paddling instructions.

Salt River kayaking tours leave from the AOA office in north central Scottsdale. It takes about 35 minutes to get to the Salt River. AOA uses different embarkation and disembarkation points depending on water flow and time of year.

Water temperatures vary from the 60s in the winter to the low 80s in the summer months. Swimming is possible all year.

Where to stay in Scottsdale

With the feel of an Andalusian village, the elegant Omni Montelucia Resort & Spa in Paradise Valley is far enough away from the action to feel like a resort getaway, but just a ten-minute drive from downtown Scottsdale. The resort’s Joya Spa has Moorish accents, a domed room with a crystal pedestal, and an outdoor rooftop pool. 1 888 627 3010  www.montelucia.com

The W Scottsdale Hotel and Residences in downtown Scottsdale attracts the urban hip and its fair share of celebrities. Don’t miss the infinity-edge pool, the Zen Garden, a Triple Oxygen Treatment Facial at the small but quirky Bliss Spa, and the Living Room lobby bar. www.starwoodhotels.com 1 877 782 0104

The Hotel Valley Ho is a cool downtown hotel with a fun retro vibe.

You don’t need to leave Scottsdale to enjoy the water. Both SouthBridge on the south side of the Arizona Canal and the Waterfront district on the north side have plenty of places to wet your whistle. Try Canal, or drink in the scene at the canal-side patio at Olive & Ivy.

My Salt River kayaking trip was hosted by Scottsdale CVB. Visit their website for more travel information on Scottsdale at www.experiencescottsdale.com