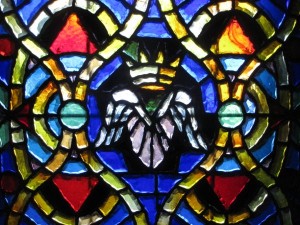 People who live in glass houses shouldn’t throw stones. What about girls who wear glass dresses? Luckily, when I was wearing a glass-encrusted couture dress in a Montreal street scene for our demo video, no one pelted me with rocks.

Espace Verre, a glass works studio, gallery, school and glass facility centre was the perfect place for our art themed video. It was so good I went twice.

After  a brief workshop with glass jewellery artist Laura  Sasseville I learned that I’m no glass master after using a blow torch to make three wonky glass beads.

Downstairs, in the hot room, I saw chicks with buff arms twirling huge iron rods with melted glass like the rods were cheerleader batons.

I also saw THE dress made by designer Jessica MacDonald. Short and sassy, with a bubble skirt and hand-hammered glass medallions, it’s Sex and the City personified. I lust after this dress (though after my major budget-killing splurge at Barbeau the day before, no way was I asking the price). Still, I couldn’t just let it sit there on the dummy. Not when it could be sitting on this dummy. What could I do but beg to try it on?

Jessica agreed to be interviewed and let me put on the dress. Jessica brought a second dress, too and it fit! It fit! Okay, so it was a little tight on the hips. Those damn croissants. I’m the first person to ever wear it, so good thing I didn’t spill red wine.

Then Director Bob, for some obscure visionary reason (at least it wasn’t a bubble bath scene) had me walk outside in the bubble dress. Let me just say it was freezing out. And I walked and walked. Up the street, down the street, back again and again.

“Why didn’t I bring pantyhose?” I whined, realizing how short the dress is and remembering how untoned my legs are – a fact I usually forget until summer. But there’s something about a sexy short dress with a bubble skirt and glass medallions to make a woman forget her help-me-I’m-in-front-of-the-camera fear. It was the one and only catwalk moment of my life and I was vogue-ing and vamping with the the best of them. I even attracted passing cars, who obviously thought an extremely well-dressed nutcase was on the loose, but fortunately no one called the police to restrain me.

The posing was fun, but the interview with Jessica was hard. Let’s just say I’m no Baba Walters.

“Touch the dress, touch the glass,” Bob kept saying. “Use your hands.” So there I was fondling myself (don’t worry, I kept it PG) while trying to ask Jessica  insightful questions about her architectural background and love of texture. Good thing she’s articulate and saved my glass-coated hide.

And so I survived yet another scene and it was all about glass. If it had gone badly, it could have shattered my self-esteem, but instead I found all the new glass art and fashions positively illuminating.

Oh, right. I was going to talk about the schmuck portion of the shoot. Ah well, I promise I’ll write about it tomorrow.