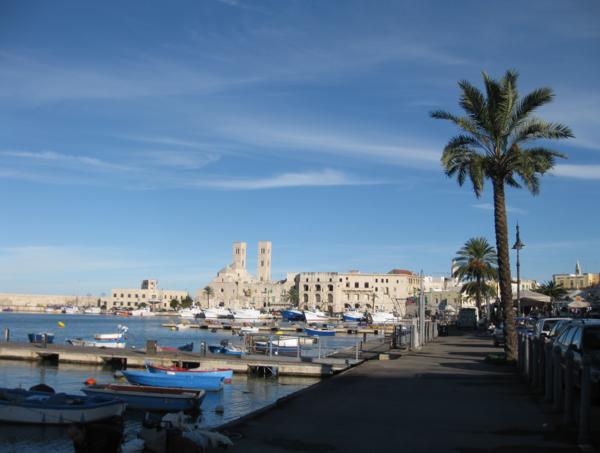 You might call our group visiting Puglia, Italy, a small one if you think travelling with 50 people is small. Compared to say, the population of Mumbai it might be, but for a bus tour of southern Italy it’s pretty major.

Imagine when we have to make a bathroom stop – especially as our group on this trip to Puglia, a lesser-known destination of Italy (the heel on the boot), is 80% women. Nothing against women (obviously, as I happen to be one) but a lot of us have small bladders.

A lot of cafes in the small towns of Bari, Lecci, Molfetta and Otranto will be very happy to never see us again as they’re pretty tired of long bathroom lineups. I’m tired of them, too.

Except, and this is the weird thing, everyone in Puglia does seem happy to see us. Unlike in the larger centres of Rome, Venice and Florence, people aren’t sick to death of foreigners and even pose for photos without scowling. Usually.

Friendly people with dogs in Puglia

Even a young guy with a dog posed for us at the Castle of Aragon in Taranto, and we all know that young guys with dogs are just too cool to pose for a group of tourists. He did draw the line when Toby, a journalist on the trip, asked him to stick his little dog up on the rampart of the castle behind him. Which was probably a very good thing for the dog as it’s a steep drop off down into the moat below.

It made me realize though, that when it comes to traveling and photography in Puglia, like everywhere else, if you don’t ask, you don’t get. I have missed so many photo ops on this trip to southern Italy because I don’t want to impose – or else I try to be subtle and take it without anyone noticing and then I get a blurry photo of someone’s purse or shoe. That said, it’s always a toss up between experiencing a place and documenting it.

To shoot a photo while traveling or not to shoot?

The one time I truly regret asking someone for a photo was a couple of years ago when I ended up in a small Bulgarian town in the rain (in the mountains) and went to a tiny bar in the back room of some mom-and-pop grocery store.

When a photograph ruins the moment

There were a bunch of grizzled men in the bar that looked as if they came straight from Hemingway’s For Whom the Bell Tolls. Then one started playing the guitar. My friend and I pooled our money and had something like 75 cents in Bulgarian money but it proved to be enough for two glasses of wine. It was just one of those perfect moments. And then I asked if I could take a photo and suddenly it wasn’t perfect anymore. It was us versus them – the spell was broken, that wonderful rare spell when you feel connected with strangers in the foreign country you have come to see.

And, by the way, the man said no, so I never got the photo after all.

But, hey, I’m supposed to be talking Puglia in Italy. So far I’ve seen a gazillion Romanesque cathedrals, the blue Adriatic Sea, drank some excellent red wine called Primitivo, seen a bunch of little houses called trulli with cone roofs that look like Hobbit houses and – let me just say – the sun is shining gloriously (well, it was until this afternoon and now I think it’s going to rain) and the limestone is gleaming white and the streets are made with worn stone so old and faded that you can just imagine Dante or Giotto or some other famous Italian that was probably never in Puglia walking over them.

More than cathedrals in Puglia

But of course, Puglia is not all cathedrals and piazzas. Or even pizza. I bought a pair of thigh high grey suede boots in Bari. Everyone here wears gorgeous boots. How could I not? At 89 Euros they were practically a steal. So if you don’t want to come to Italy for the sun, the beaches, the cherry tomatoes and weird yet delicious cheese filled with creamy stuff, then come to take photographs, for the bathrooms and for the shoe stores. Trulli, you won’t regret it.